The urban area is for the most part paved with roads, car parks, squares, buildings and patios in gardens. Because of this the rainwater that falls on the urban surface can be only partially absorbed into the ground. The rainwater is usually drained immediately by the sewage system, where it disappears out of sight of the urban resident. During heavy rain showers it can put a strain on a sewage system or treatment plant and can lead to water in the street.

Above-ground drainage of rainwater keeps that water visible in the city and is in many cases less costly than installing a separate sewage system. These days above-ground drainage is often preferred for stormwater runoff because the water system is then visible and poor connections can be prevented. When a separate system is laid, the sewage water drainage system is often erroneously connected to the rainwater runoff system. Untreated sewage water then mixes with the surface water. Above-ground stormwater runoff can increase citizen interest in urban water management and, when laid well, can actually improve the look of streets.

Another advantage of above-ground drainage is that residents are less likely to cause pollution through activities such as washing the car in the street. Obviously above-ground drainage should not lead to problems such as puddles. Rainwater from surfaces heavily used by motorised vehicles must be drained by the sewage system or treated. In this case an estimate must be made or possibly supplemented with testing. Rainwater from such surfaces usually contains too many pollutants.

Gutters have a natural appearance, thereby contributing to the natural environment of the city, and furthermore have a purifying effect.

Obviously it is important that when placing the gutters there is enough of a slope that the water drains in the right direction. Above-ground rainwater drainage can increase residents’ interest in urban water management and, when well-implemented, adds value to the cityscape. 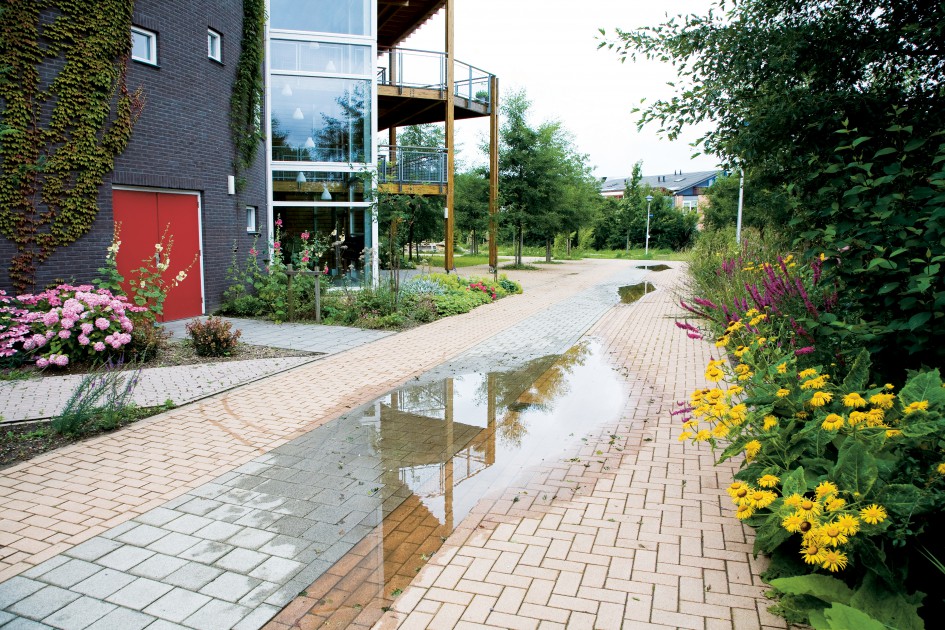 As a rule of thumb for new developments it can be assumed that 50% of the surface is impervious and 50% not. Of this impervious surface just over half consists of roads, pavement, etc. and just under half of roofs.
In existing urban areas the percentage of impervious surface is greater. This can be calculated more exactly in concrete situations.
The amount to be drained can be determined by calculating with a shower intensity of 0.09 m3/s/ha (litres/second/hectare) in the planning area.

The prognosis from the KNMI for an increase in the extremes in precipitation intensities is, depending on the climate scenario, 25-108% in 2100 [Lenderink, 2011].

A greatly simplified calculation method for an initial design is as follows: the various drainage areas, (A) are multiplied by the accompanying drainage coefficient, (C) and the precipitation amount, (N). This total precipitation amount should be consistent with the cross-section of the above-ground drainage (width x height) multiplied by the rate of flow (v, take here: 1 m/s).