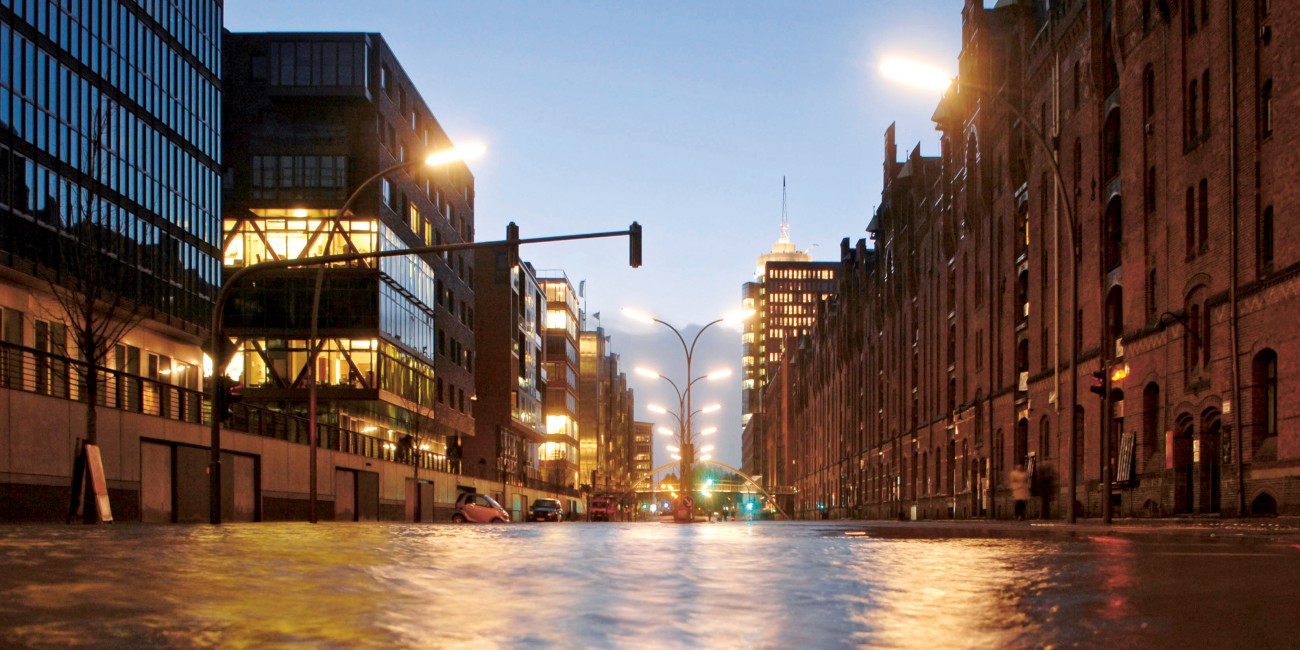 On the left side of this photo the new buildings with the plinth that can be flooded and on the rightside the old warehouses of the harbour area © ELBE&FLUT, HafenCity Hamburg GmbH

Delta cities face the additional threat of extreme storms that come in off the sea. The Netherlands has traditionally devoted much attention to building dikes as primary flood protection. Yet successfully making cities climate-proof now requires additional attention to water-robust building in urban areas.

The world’s largest cities, including those in the Netherlands, are located in delta areas.

Internationally as well as nationally, both in research and in practice, better ways are being sought to be able to protect delta areas from the expected rise in sea level and extreme weather.

The Netherlands has traditionally protected itself from high water with dikes. Before the Middle Ages, when people started building dikes, it was common practice in low-lying areas to build on man-made mounds or on ground that was naturally higher than the surroundings. Yet when people began to intensively use and build on lowlands as well, the switch was made to use dikes as primary flood protection. Exceptions to this are the harbour areas found in many historic towns, which lie outside the dike walls and are raised in their entirety.

With regard to water safety along the coast and rivers, a fundamental differentiation must be made between high ground outside of dike-protected areas and low-lying areas enclosed by dikes. There is also a difference in nature between flooding in riparian zones, which is predictable and where measures such as evacuation can be taken in time, and flooding from the sea, which has less advance warning and where evacuation is therefore usually not possible.
Of course, the recent floods in Germany and other countries in Central Europe ( 2021) show that riparian floods are also not always predictable, due to the extremely large amount of rainfall and the exceptional pressure this places on the dikes. On the other hand, an earthen dike near Wilnis in the Netherlands collapsed in August 2003 because it became too light due to drought. The increasing extremes in weather also mean extreme loads for the levee system.

Multi-layer safety approach in the Netherlands

In 2008 the principle of multi-layer security was launched in the Netherlands. Within this concept are three distinct layers:

Whereas in the past all attention was given to the first layer of prevention in the form of dikes, nowadays efforts are being made to also investigate the potentials of spacial planning and disaster management.

The introduction of the second and third layers means that current measures are now tailored to local areas in order to help minimise flood damage. In the Netherlands there are clear requirements for the dimensioning of the first layer, i.e., the dikes. Measures undertaken in layers two and three have no influence on the required degree of safety provided by layer one.

The introduction of the multi-layer security concept makes the task of water safety management more complex. While only RWS (Rijkswaterstaat, Directorate-General for Public Works and Watermanagement) and local water boards are responsible for the first layer of dike rings, responsibility for the second and third layers are shared among several parties, including provinces, municipalities and private parties. This requires a much higher level of co-ordination.

Naturally, realising increased safety levels and limiting the impact on local critical points is always desirable. The complexity of the MLV-concept additionally lies in the need to take into account future developments such as climate change, population growth and decline, economic developments, changes in spatial development and so on.

Within the MLV-concept, the costs of layers 2 and 3 fall to new parties, such as developers, local governments, businesses and citizens.

In the Netherlands, where the first level provides strong protection, leaving only a slight chance of flooding, it is usually not profitable to invest in the second layer within diked areas. This kind of investment often meets with resistance, particularly when the costs must be met by developers and other parties instead of by the water boards as is now the norm. For areas outside of diked areas, this is different. Here, due to frequent flooding, investment in layers 2 and 3 can indeed be rewarding, and the motivation for this investment is greater among the public and businesses.

Because in most cases land use is already established, it is not easy to find support for second-layer measures. Combining measures, such as a climate dike with homes, often meets with resistance because the responsibility and funding must then be shared by a number of investors and managers, both now and in the future.

In layer 3, better co-ordination and control of emergency services, good public information and the realisation over time of waterproof utilities will not only have a positive effect on the success of disaster management but will also make it easier to restore an area after a disaster.

For local problems, multi-layer safety measures are most efficient. Multi-layer safety augments the possibilities for delta cities. Dordrecht has floodplains and low-lying areas which could be threatened in such a disaster as a combination of spring tide and high river water levels. Evacuation in these areas is only possible to a limited extent. Here, the safety of the population can be increased by combining measures in the first layer, such as primary defenses, with measures in the second and third layers, namely compartmentalisation dikes, more and better escape routes, shelters on higher ground and effective communication strategies.

Flood-proof construction is an option in flood-prone, though often geographically higher, urban areas outside the dikes. In recent years, various solutions for different field types and scales have been developed.
The “Island of Dordrecht” is protected by various measures. The port city of Hamburg has a second type of  infrastructure against flooding. There the ground floors of the buildings are protected by flood defenses. Similar solutions are realised in the cities along the Rhine.

The following solutions can protect buildings located in flood-prone areas and prepare people, buildings and installations for a possible flood:

Also at the district level there are options such as surface elevation, floating areas, buildings on stilts, temporary dams, autonomous or raised infrastructure, and emergency refuges.