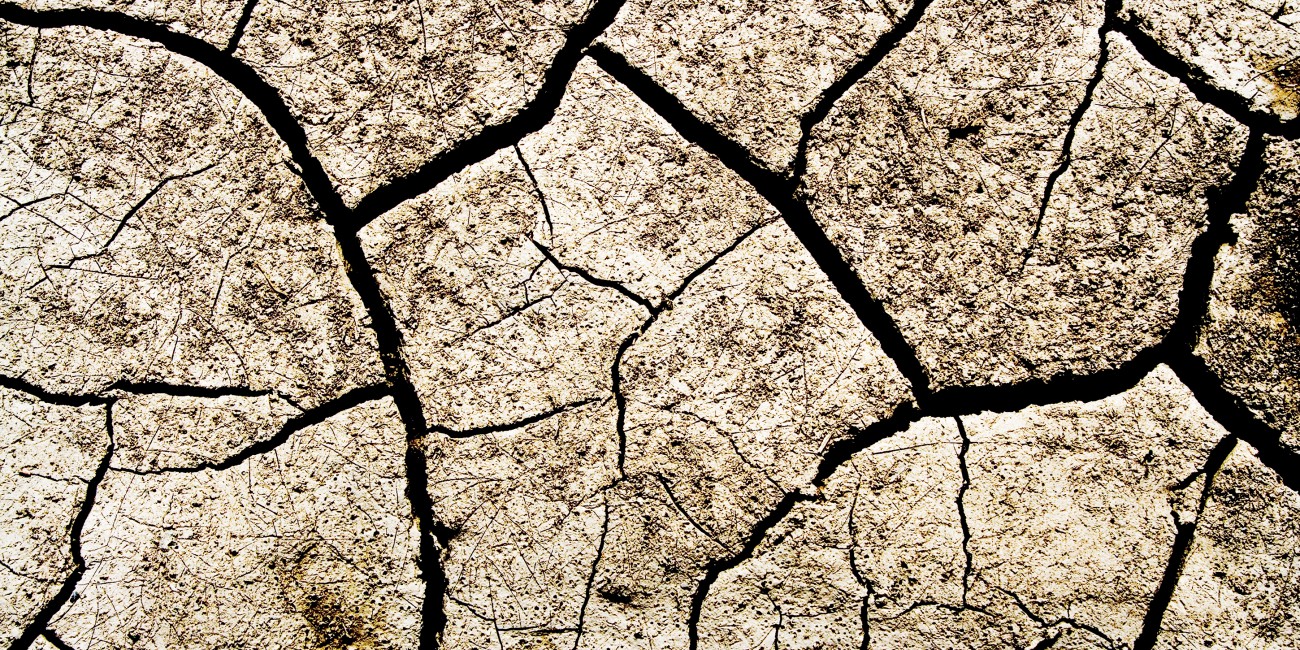 Drought on a global scale

The text below was written in collaboration with Han Frankfort, Ministry of Infrastructure and Water Management.

The implications of drought on a global scale are enormous. Not only is the production of food seriously threatened, but other water-related sectors are under pressure as well, such as the supply of drinking water, and cooling for industry and power plants. The environment becomes increasingly threatened, and the risk of forest fires grows. The economic loss caused by drought in the US, for example, is higher than damage caused by other natural disasters such as floods or hurricanes [EPA, 2011]. Industries can be seriously impeded by a lack of cooling water. Hydropower plants are forced to reduce production or even temporarily shut down.

The anticipated damage from climate change from drought is also greater than that from floods in urban areas in the Netherlands. [Deltaprogramma Nieuwbouw en Herstructurering, 2014].

Drought can have various causes. Drought in Southern Europe is mainly caused by a lack of precipitation during winter. Little moisture will be available in the soil and in spring in the first warm period can already lead to drought. This has serious consequences for agriculture and the environment. It must be taken into account that due to climate change, drier winters will occur more often in Southern Europe. [Klein Tank, 2009]

Drought in The Netherlands

Despite heavier rain showers and imminent floods along the rivers, the Netherlands is becoming increasingly drier. In the Netherlands, drought is caused by land reclamation and drainage. Due to the lowering of the water table and drainage or percolation of water, in dry periods there is now a need for water intake. This water is usually of lower quality. Drought in the Netherlands has everything to do with management of the groundwater table.

‘Drought is mainly caused by adaption of the water system to the demand of land use. We discern three categories of causes:

In the West, only surface water is used for irrigation which is always readily available. Salinisation caused by brackish water seeping in and the intake of foreign salt water is a water quality problem. In dry periods, water is taken in here as well. In the dry spring of 2011, for example, Rijnland let in fresh water from the Stichtse RIjnlanden, though at times of serious drought an irrigation stop is issued.

Drought also brings along with it difficulties for water security. Some 25% of the Dutch flood defence structures consist of peat dikes which contain a lot of water. If this water evaporates, which happens during times of prolonged drought, these dikes can collapse by shifting or sagging. In Wilnis in 2003, a peat dike succumbed and part of the town was flooded. In times of drought these dikes are regularly inspected and in some cases irrigated. In some instances farmers are requested to move their cattle off the dike. [NOS, 2011] 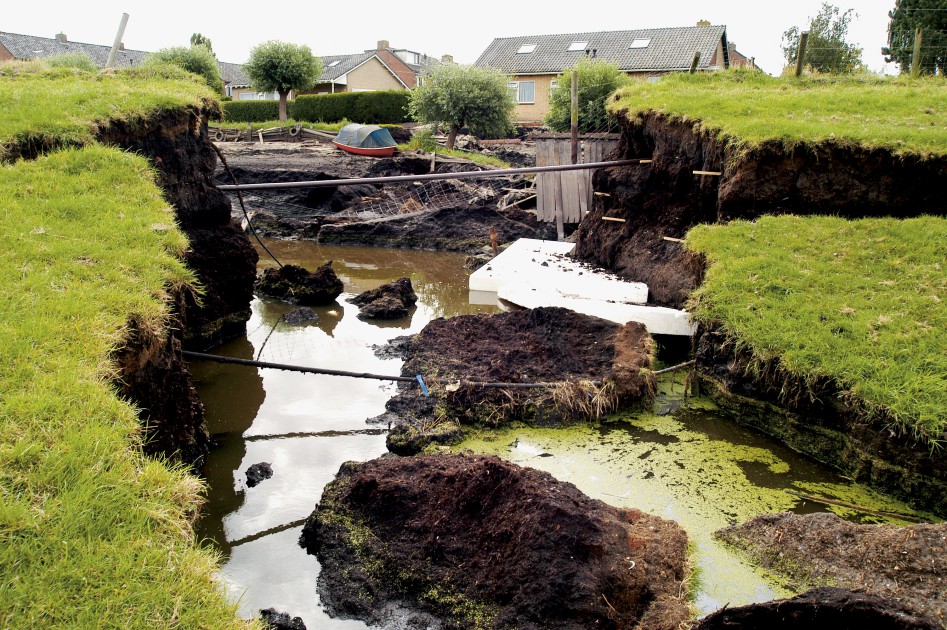 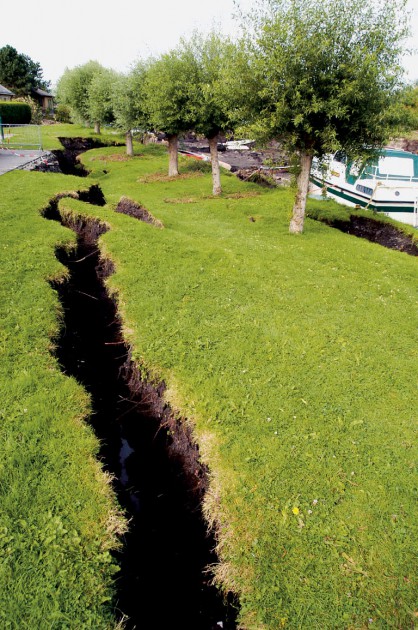 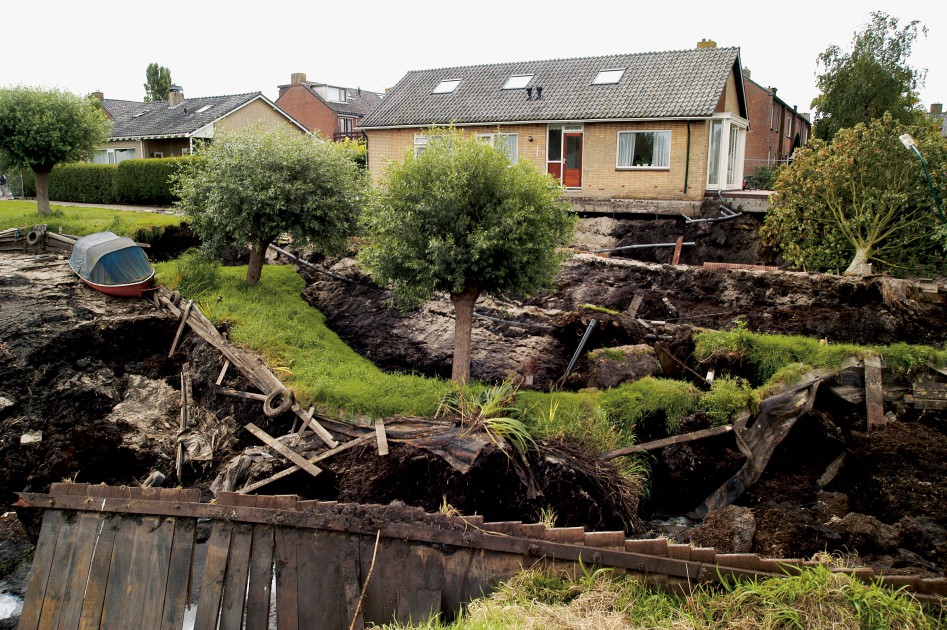 During the drought of 2003, the Dutch Government requested citizens to use drinking water and electricity sparingly. Although provisions were not directly in danger, there was talk of a possible critical situation if the drought were to continue for much longer. A shortage of cooling water could have endangered the electricity production, and the low water level in the rivers eventually would have led to drinking water shortages.

Lower water levels in rivers hinder shipping traffic as waterways become narrower, and as a result of the shallow depth of the rivers only smaller loads can be transported.

Field moisture deficiency around 2050 for the W+ scenario

Due to adjusted water level management and a decrease in drainage and groundwater extraction for drinking water, a part of the drought problems can be remediated. In some bog areas the damage resulting from drainage is irreparable because part of the organic matter has already been oxidized.

An adjustment of the ground water level is not simple, due to the opposite interests of farmers and conservationists. Farmers want the groundwater level to be lowered in spring to prevent the soil from being too damp and soggy so that they can cultivate the land using their farm equipment. Another reason for lowering the water level is that wet soil is colder in spring and crops will grow more slowly.

40% of indigenous plants are threatened by drought. Some fauna such as butterflies and insects are dependent on these plants or a specific humid ecosystem and thus are threatened. The intake of foreign water, usually with a higher fertilizer content, to compensate part of the desiccation causes algal growth, overgrowth of natural areas and dominance of certain species.

In the higher part of the Netherlands it is mainly the decreasing level of seepage of calcium-rich groundwater due to the lowering of the groundwater level because of extraction for drinking water and fast drainage, which is a problem for rare, moisture-loving plant communities and accompanying fauna.

In the lower-lying parts of the Netherlands brackish seepage due to the lowering of the water level and intake of foreign water during dry spells are a threat to flora and fauna, but also to the agricultural sector, which requires fresh water.

In the dunes, groundwater extraction for drinking water is the main cause of desiccation.

Climate change will cause weather instability. Sometimes there will be large amounts of rainfall and periods of drought will become longer. Periods with higher temperatures will also become more common.

The cause of a low water table in urban areas is that historically the water was discharged by the sewer system as quickly as possible to prevent flooding. Replenishment of the groundwater was limited.

Leaking sewer systems lead to a further lowering of the water table due to the draining effect .

The interspersed planting of trees in public green areas provides shade for the lower plants preventing excessive evaporation and cooler spots for city dwellers to sit. The trees themselves have deeper roots and are able to provide for their own water supply. Certain tree species are able to stand drought better than others.

In dry periods foreign water is often taken in to prevent damage by drought. The water from outside is often nutrient rich and can also contain salt or pesticides, it can also be turbid and smelly. This can lead to excessive algal growth and a disturbance of water- and plant life.

Prolonged warm and dry periods are often interspersed with heavy rain showers. The dried soil is then not able to absorb much water, which results in overflowing of the sewers after a dry spell with a relatively large effect on the – caused by the drought – vulnerable water system (for example the fish mortality as a result of a lack of oxygen). [Waterschap Hollandse Delta, 2011]

There is a correlation between drought and heat stress, see Heat. In a period of drought the soil and the urban vegetation will no longer emit water vapour (through evaporation). This causes an increase of temperature and problems due to an increase in heat. With a warming of the climate the need for water sports increases. It will be necessary to ensure the water quality of existing recreational lakes by decreasing the nutrient level in the water. There will also be an increased demand for additional water sports facilities such as water sports objects. With the design and realisation changing circumstances of the urban water system have to be taken into account. If necessary these facilities should be designed with an impermeable bottom to prevent them from falling dry.

In the lower-lying parts of the Netherlands salinisation is an extra threat to water quality in the city and consequently also for the flora and fauna. Fresh groundwater will evaporate in longer periods of drought which will not be replenished by rain. This will let seepage flow get stronger or start it up. This process is called internal salinisation; salinisation due to the intake of foreign water is called external salinisation. [Smeets, 2008]

DAMAGE TO BUILDINGS AND INFRASTRUCTURE

Developed areas cannot exist without water. Many functions in urban settings are dependent on having enough high-quality water. This is especially the case in peat and clay areas in low-lying parts of the Netherlands. Water is essential for preventing (accelerated) subsidence, uneven settling and pile rot, for a vital urban green structure and for various activities on and in the water, such as housing and recreation.

A shortage of water in urban areas leads to significant damage, as is clear from research by Deltares. This concerns first and foremost damage in urban areas already occurring from a low water table, so independently from the effects of climate change.

The conclusions are as follows:

Currently more than € 5 billion in damage has occurred to buildings as a result of a low water table. In theory this figure can increase to a maximum of € 40 billion. In addition to damage to buildings, there is also damage to both above-ground and underground infrastructure in urban areas as a result of a low water table, including streets, squares, green spaces, sewer systems, cables and pipes. These infrastructures are damaged by settling and uneven sinking. This damage amount is quantified at around € 250 million per year.

This damage to buildings and infrastructure is already occurring or is expected for the future based on existing circumstances. This damage can increase as a result of climate change in the future, as a result of a further drop in the water table. For example, in 2050 in low-lying parts of the Netherlands – in the KNMI’s former W+ scenario – the groundwater level will have fallen ten centimetres or more and in higher elevations of the Netherlands the fall can be as much as one metre. As a result of climate change damage to buildings can occur sooner and the damage to infrastructure will increase.

Total damage amounts for the period 2015 – 2050 are calculated in the Dutch government’s Manifest on the climate-resilient city. Foundation damage is estimated at € 25 billion; damage to above-ground and underground infrastructure is estimated at € 9 billion.

Damage as a result of water shortages can initially be prevented by making sure there is enough high-quality water in the urban setting. Since it mainly concerns groundwater, the question in practice is if it is technically possible to get the right amount of water in the right place and what the cost-benefit balance is.

There are various measures to address water shortages, which can be grouped in two categories: water retention and water supply.

First and foremost it is important to retain as much of the rainwater in the city as possible, for example by disconnecting rainwater discharge, by replacing paved surfaces with porous surfaces or vegetation and by installing infiltration devices (infiltration sewer systems, boxes and infiltration wells and repairing and replacing leaking and/or draining sewer systems or cunettes, thus preventing the discharge of groundwater.

Re-using effluent. Rather than discharging the effluent from the waste water treatment plan to outside the area, re-use can be an option to retain the water in the urban setting.

Surface water level management is important in as much as the level influences the groundwater level. This varies with the type of ground and is very diverse in urban areas.

The subject urban desiccation has only recently been placed on the water agenda. Currently the borders of the problems that may arise as a result of drought or shortages in water availability in dry situations are explored. [Deltaplan Hoge Zandgronden, 2011]. There are no standard solutions available. It is important that with the design or reconstruction of urban water systems the effects of drought and lack of water during the summer are taken into account. Many measures can be taken in relation to measures in the context of flooding.

Many measures described elsewhere, such as infiltration and buffering rainwater, contribute to preventing drought: