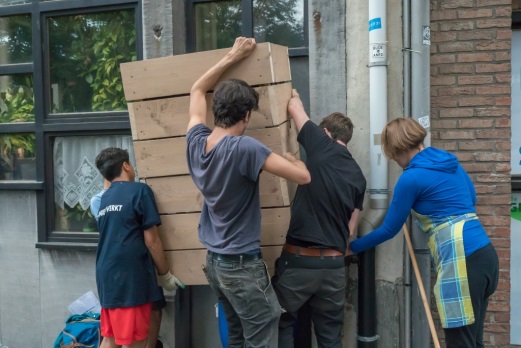 Experimentation happens mostly on location. An experiment can be defined by the local authorities and others who are involved within the area or in the cooperative design process  Within an experiment those involved will look at non-standard solutions. The fun thing about experiments is that any results will be directly observable. For example, ‘What if we used a mobile meeting point in a street?’
The Antwerp Citylab2050 used experiments in an urban lab called ‘garden streets’, in which neighbours and design teams experimented with a mobile meeting place (on wheels) that could move through a street.  In another urban lab citizens experimented with rain barrels on the street as DIY (do-it-yourself) water retention buffers, where the water could be used for urban plants.
Another example would be the closing off of a street for multiple days to be temporarily repurposed into a ‘living street’. For instance, grass mats could be rolled out and plants and seats could be placed so that people could experience the effect design has on their standard of living.