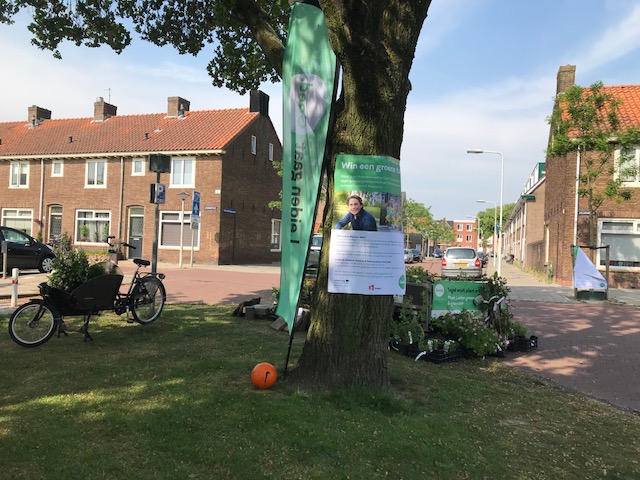 Working with a celebrity can generate support for something unknown or unconventional, because people tend to follow charismatic icons. Endorsement by such an ambassador (especially through social media as ‘an influencer’) is an effective way of establishing a new outlook on complex themes that people do not easily relate to.
Level of engagement: Informing, Involving

Example: Noorderkwartier project
An example of recruiting celebrities to help draw attention to a project is the garden contest held in the Noorderkwartier neighbourhood of Leiden. The first important step in the contest was to attract the attention of local residents and to make them aware of climate change and its consequences for their own living environment. We chose to ask a famous Dutch person, Lodewijk Hoekstra (a TV gardener who attracts attention and is committed to sustainability), to help us. Hoekstra’s efforts were a great help in gaining attention for the contest and the assignment. In order to publicise the launch of the competition, residents could pick out a plant in exchange for a tile. Hoekstra and the Leidse Tuinman & Tuinmanand the Garden Kidswere present at the event to inform residents about how to green their gardens. Whenever we held an activity in the neighbourhood we asked Hoekstra if we could make a video with him that we would then post on the internet. A positive spinoff is that Hoekstra has now also given attention to the Noorderkwartier project on his own national TV programme.