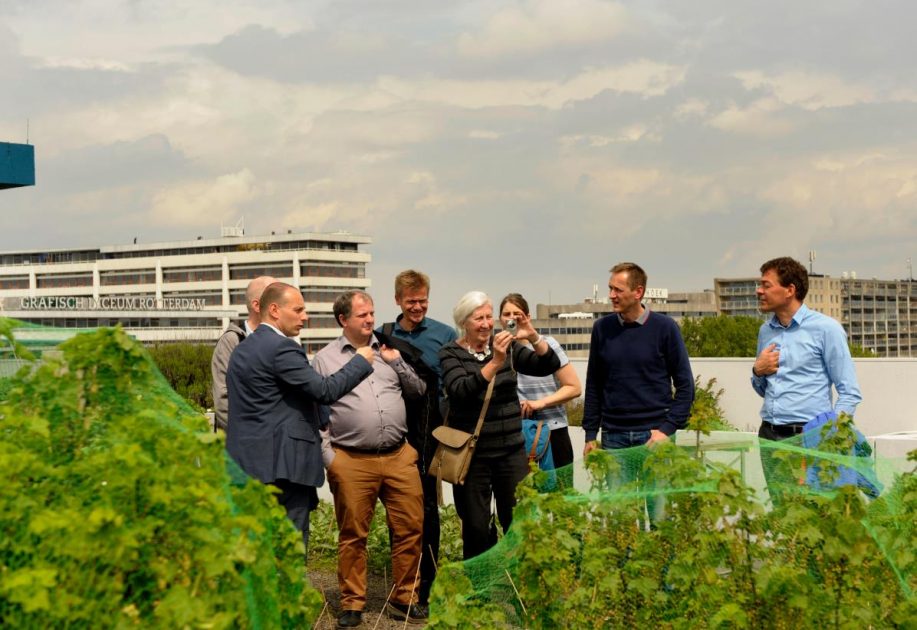 Sint-Andries: working together towards a climate robust neighbourhood

Being a partner in the European URBACT programme ‘Resilient Europe’, the Antwerp municipality uses the concept of ‘urban resilience’ as a new frame to integrate social and spatial issues into the climate adaptation policy development process. As a connecting and integrating lens, urban resilience is used to experiment with co-creative methods to improve quality of life in the city.

Taking a more place-oriented approach, they chose to focus on the Sint-Andries area. Sint-­Andries was selected due to the fact that the neighbourhood already had affinity with the theme of climate adaptation. Two large infrastructure projects (redevelopment of the Gedempte Zuiderdokken and the Scheldt Quays) that include measures for climate adaptation are currently in the pipeline and the people of Sint­-Andries are being consulted throughout the participation process. Additionally, several small future redevelopments of local streets and squares in Sint-­Andries are being drafted.

Sint-Andries is a neighbourhood located in the old city centre and connected to the Scheldt river. Despite its slightly higher topographical position compared to its surroundings, it still faces water management related challenges due to the large proportions of paved areas and a lack of green infrastructure. The municipality’s options to tackle these challenges are limited. Sharing the responsibility for a climate-robust neighbourhood is therefore indispensable.

The main stresses and shocks due to climate change in Antwerp in general, and Sint-Andries in particular, are:

At the start of this project, the focus was on getting commitment from different municipal departments, hiring an expert to help with the process, and mapping and contacting relevant stakeholders of Sint-Andries, who together would form the URBACT Local Group (ULG).

Shortly after, the project leaders organized an expert consultation meeting. The goal was to let experts in various scientific fields (people, ecosystems, infrastructure, institutions) identify the most important challenges for climate adaptation of Sint-Andries. This would at a later stage give input to the local action group.

The first URBACT Local Group kick-off meeting followed the expert consultation, with an aim to better understand and identify challenges of climate adaptation in St-Andries. They first mapped the area from a climate adaptation perspective, formulated challenges in small groups, after which they shared them in larger groups. Substantiated by facts and figures from the expert consultation, they prioritised challenges by using the ‘Can Do’ – method;

With the identification in hindsight, the ULG organised workshops on concrete interventions.The goal was not to merely validate the challenges and objectives, but also to mobilise the group to take up actions and form experiment teams. They did so by presenting the mind-map as a synthesised outcome in order to validate it with the local action group, and by summing up the action experiments, showing great potential.

They further specified and defined experiments in group by using a project template, received mini-coaching (what is needed to make this project a success) and presented means of support in the next phase.

Upon this first action workshop, the Antwerp municipality project leaders started collecting “calls” from the experiment teams and communicated these through the StadsLab2050 channels (e.g. call for flat roofs).

The process expert was based in Antwerp and had a considerable network in the area, which proved beneficial. After the ULG workshops, they started seeing possible synergies with local organisations and tried to get them on board as well. New interesting actors kept on joining the ULG throughout the process. They did and are still doing the same networking within our municipality and expert networks to link the proper organisations and people. Within the municipality, the municipal project leaders linked a relevant colleague to each experiment of the ULG so that the experiment teams have direct access to the city administration and expertise.

Project groups also started to meet outside the “official” workshops. To help these teams, we organised a coaching session, where project ambassadors could get support from the external process expert and municipal project leaders.

To give these ideas some traction, the StadsLab2050 communication office started taking interviews with the experiment ambassadors.

In order to gain valuable insight, the municipal project team organized an inspirational site visit to Rotterdam. They invited members of the ULG and local politicians to join them in Rotterdam and learn from their experiences and draw lessons for their own experiments. The Rotterdam administration hosted the entire day, providing insight into urban resilience, rooftop policies, water management, etc.

Even though all ideas were being supported, two of them received coaching over the entire course of the projects: ‘Groene Ader’ (Green Corridor) and ‘Multifunctionele Daken’ (multi-functional rooftops). Guidance was provided for both these projects to support them in influencing city policy, and how to upscale individual achievements.

Becoming experts themselves along the way, ten members of the ULG led European partners of the Resilient Europe programme through the neighbourhood, elaborating on the process, first experiments, dreams and challenges. There was also an exchange between the ULG members and the European partners on the working methods of other cities.

The core community members of the ULG felt the need for continuation and working on an action plan for 2018, resulting in 10 actions that will contribute to the resilience goals of the neighbourhood.

By the end of 2017, the ULG organized a mid-term evaluation  and dissemination event,aimed at providing an overview of the process and achievements so far, of  existing experiments and a gaze towards future actions (10 actions planned for 2018). During the event the group reflected further on the process, on how the cooperation was going and what the added value of the process was. Local politicians also participated. In preparation of this event, an independent evaluator conducted interviews and workshops with several actorsin the process.

Around the same time, the municipal project team also organized an internal mid-term evaluation,taking a moment together to reflect on the process so far and evaluate the collaboration between the different departments involved. During this session they discussed the learning objectives that were formulated at the start of the project. They also discussed ways to facilitate the current dynamics in the neighbourhood, by looking at the role of the government and new governance structures. Furthermore, they discussed the conditions in which these kinds of project could be replicated elsewhere.

At the kick-off meeting, the ULG group formulated their shared challenges for Sint-Andries from a climate adaptation perspective. From these shared challenges the group distilled shared objectives, which resulted in the identification of 5 objectives.

The 5 main objectives are:

The ULG formulated 9 principles to look at these objectives:

The idea for this experiment was conceived at the beginning of the process. One of the ULG members was proactive in identifying the synergy between this project and possible funding sources. He submitted a project proposal at the district of Antwerp’s ‘Civil Participation Budget’ tender in the initial phase of our project. The neighbourhood committee already conducted a local research project involving the area’s walkability in the previous year. The idea was to complement their vision of a pedestrian-friendly neighbourhood with the aspect of climate adaptation.

During the various brainstorm sessions, more and more ULG members became interested in the concept of creating a green corridor that runs through the neighbourhood, showcasing and inspiring climate resilience measures. On the long term, the idea is to upgrade this corridor into a green, water infiltrating, cool, climate-robust area that connects different innovative experiments and functions as a living lab.

The experiment ‘green corridor’ proved suitable forencouraging people to work on climate adaptation. One of the advantages is that a number of actions will take place in a rather small and confined area. This makes experiments tangible and allows people to take care of their own creations.

The experiment took off with a ‘dream day’, in which various proposals for a later ‘action day’ were formulated and debated. The ULG took care of the communication for the event and even got a local celebrity to promote the dream day on social media.

The event was organised in the local community centre and welcomed approximately 60 participants. It was an interactive workshop session in small groups, where participants could pick a theme to work on, for example ‘water infiltration’, ‘green areas for playing’, ….

The workshop leaders provided a lot of working material and tools for the various groups, including inspiring examples and images of the current environment. Each group then created a collage of the way they would like their street to look in the future.

At the end of the day, each group showcased their collage and explained their creation to the other groups. Besides from working on different themes, the groups also worked on different segments of the ‘green corridor’. When putting all the collages together, the idea of the green corridor clearly emerged.

Although people were encouraged to dream, they were asked to identify a number of actions that could be carried out inthe short term as well. These actions should be able to be implemented on the action day that was already scheduled for later that year. To create ownership, the participants were also asked to write their names on the actions that they would like to carry out.

The municipal project team learned that the methodology of a ‘dream day’ proved to be a solid method to work on collective vision building, enabling dialogue and an exchange of thoughts and ideas, often making the participants realise their ideas were shared by their peers. The use of a dream day is part of the experiment itself, since this was an altogether new way of imagining a new situation instead of conducting a more traditional public consultation. Even though not every participant of the dream day actively contributed to the preparations of the action day, it provided the necessary public support from the community.

In several locations within an area of 200m in the heart of the future “groene ader” – different teams worked on micro-interventions, where they could more or less see each other at work. A tent on the main square showcased the dreams, which were hung up to provide context, and provided a location for the team briefings, coffee and lunch.

What: Some of the experiments had a temporary character:

Other experiments had a permanent character:

At the end of the day, the whole group did a walk to see and discuss the results, and to discuss ideas on the next steps. A local politician came to see the results as well.

Noteworthy was that this ‘Do day’ was organised during “car-free Sunday”. The neighbourhood was completely free of traffic, which made it the perfect moment to work safely on the streets and provide visibility for the interventions, as hundreds of bikers and families were strolling around. Two designated people were welcoming pedestrians and cyclists, explaining what they were doing. People from the neighbourhood spontaneously offered their help, went home to change clothes and joined in.

A photographer and a filmmaker eternalized the day. They were paid by Stadslab2050, but the scenario, interviews and editing were done together with the project members.  The result of the movie: http://www.stadslab2050.be/klimaatadaptatie/groene-ader/video-wat-gebeurt-er-als-bewoners-samen-hun-wijk-vergroenen