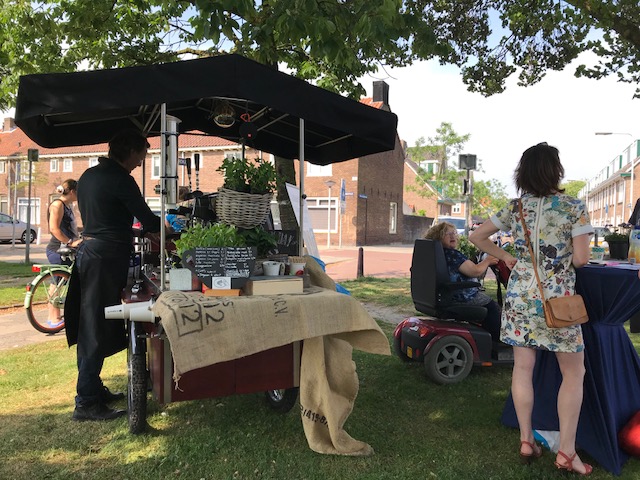 ‘Noorderkwartier oost’ in Leiden is an old neighbourhood with small street profiles, little green and a mix of low-rise social housing and private owned houses. The public space in the neighbourhood is being redesigned and the sewage system is being modernised. Leiden is partner in the European SPONGE2020 project. ‘Noorderkwartier oost’ is one of the three SPONGE2020 pilot projects in Leiden. The focus of SPONGE2020 is climate adaptation and participation. The results of the project, the technical and spatial solutions and the handling of resident participation shall serve as examples for future projects in Leiden and other places.

The neighbourhood struggles with flooding and heavy rainfall. Simultaneously, it experiences a decline in surface level and rise of underground water. For processing rainfall, the neighbourhood is largely dependent on the sewage system: only 13% of rainwater infiltrates the ground. The neighbourhood is mostly built and paved with little green; this means a high risk of too much heat during hot periods.

In order to prevent water damage after heavy rainfall in the future and to reduce heat, a design is being developed with a great deal of attention to increasing green and water storing measures. Within the project, measures will be tested on applicability, acceptance and efficiency. The residents are committed to the project through an extensive participation track.

The first step was making a spatial analysis of the neighbourhood. Consideration was given, among other things, to the distribution of ownership, street types, flooding and the risk of heat.

These principle solutions were discussed during the residents’ meetings and in an expert meeting.

The wider streets will be developed into green water-storing streets. This means that there is room for more trees with a larger area under the tree, raingardens and vertical gardens that contribute to limiting heat and increasing biodiversity. The raingardens also contribute to the infiltration of rainwater and the trees reinforce the spatial structure of the neighbourhood.

This is a street with trees between the parking places. Vertical gardens make the street greener and increase biodiversity. Rainwater can be stored at street level between the raised pavements.

Narrow streets offer hardly any room for measures to collect rainwater. With these narrow streets, the focus is on transporting rainwater to nearby surface water such as de Singel. The raised sidewalks also ensure that rainwater remains on the street and does not lead to flooding in the houses. Vertical gardens are also possible in these streets.

At these places, staying and playing will be combined with greenery and water storage. There is room here for extra-large climate trees that offer shade and have a cooling effect.

In addition to the principle solutions for street types, a matrix of measures with possible climate adaptive measures has been developed. In the matrix, the various measures were assessed on aspects such as effectiveness against flooding, against heat pollution, costs, management and acceptance. The measures were discussed during the expert meeting.

In January 2018 a participation process was started with all stakeholders: residents, entrepreneurs and corporations. The aim was to make these stakeholders aware of the need for climate adaptive measures, both in public spaces and on private land such as roofs and gardens. After all, 55% of the neighbourhood is owned by private individuals and housing associations.

To raise awareness about the effects of climate change on the neighbourhood and to share knowledge about possible climate adaptive measures, each meeting started with a mini course on climate adaptation. This was followed by the design workshop with the residents. During these co-creation meetings, the participants looked together at the most suitable design principles for the neighbourhood.

The kick-off meeting for all residents of the neighbourhood took place on January 16, 2018. Residents were informed about the expected climate change and the need for climate adaptation by means of a mini workshop “Climate”. Groups worked together through a specially developed design game: residents were able to design their own different street types using scale models. Work was done according to the world cafe method. For the video report, see this video

For the follow-up process, residents were able to register for a focus group at the kick-off meeting.

During the expert meetings in March with the designer, sewer managers and climate experts, all measures in the measures matrix were discussed and the most promising measures were selected for implementation in the neighbourhood. An account of main principles was drawn up: a longlist at the first meeting, and a shortlist at the second meeting.

Representatives of residents and housing associations were invited to the first meeting of the focus group on 15 May 2018. To break the ice and create a relaxed positive atmosphere, it began with a simple meal and an introduction game. After the meal the mini workshop “Climate” was repeated. The design principles were presented by the designers. A scale model was used on a building block level to work with these design principles in groups under the supervision of a professional. The results of the focus group were included in the design process. Another meeting for the focus group was organized on 12 June 2018.

In order to reach more residents, including those who were not at previous meetings, an activity was organized in the street in party tents. Five professionals (climate professionals, designers, and project leaders) struck up conversations with the residents based on three alternative designs. In one of the tents there was room for experimentation: there was a water table where children could playfully get acquainted with climate adaptation. There was also a mini exhibition on climate change and climate adaptation.

By inviting them from door to door, the residents were lured to the tents.

For a video report, see the following video:

Meeting for the entire neighbourhood (5th of November 2018)

At this neighbourhood meeting the note with starting points with the design principles was presented to the neighbourhood. To stress the high need for climate adaptation a animated video was made and shown. There was an information market for residents and housing associations with information on more green energy, solar panels, green roofs, expanding green gardens, the construction of facade gardens, the adoption of tree mirrors by residents and shared cars. Animation video:

and the video report of the evening:

On the 9th of November an inspection took place with the residents: collectively an inventory was made of suitable places in the neighbourhood for greening.

Garden contest and promotion ‘Get the tile out, put the plant in’

To spark enthusiasm amongst the residents to get on with climate adaptation in their garden or on their roof, a garden contest was organised; a climate-adaptive metamorphosis of the winning garden was the main prize.

During the promotion ‘get the tile out, put the plant in’ residents could exchange tiles for plants.

communication of the results and participation up to this point

The input gathered through the participation track is processed in the note of starting points and a document ‘Questions and Answers’ that can be found and downloaded by residents on the project page of the local government of Leiden. Most of the input was on water damage, green in the neighbourhood, greening of paved playgrounds, accessibility, parking, and questions on the concrete measures to be taken by the local government in specific streets.

The Sponge202 project ‘Noorderkwartier oost’ has led to a broadly carried climate-adaptation approach.

The intensive participative activities have helped create more consciousness in the importance of climate measures, and have raised awareness on the importance of the one own part in it. Private effort has already led to a significant amount of more green in the neighbourhood. Furthermore, the housing associations now choose to apply climate-adaptive measures now at renovations, like green roofs, rain storage and greener gardens.

The experience gained through this pilot tells us the following recommendations for future resident participation projects: