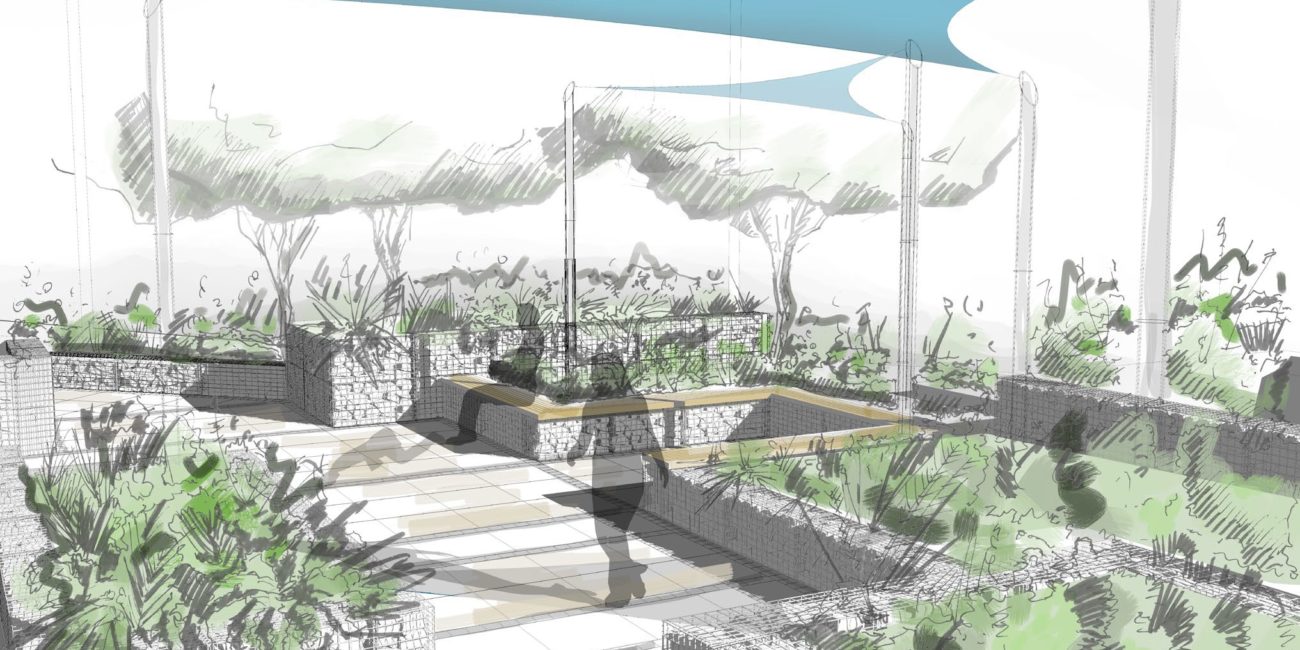 What is the problem?

Essex County Council, as the Lead Local Flood Authority, has duties to manage local flood risks and prepare and maintain a strategy for local flood risk management. As part of that, the Council produces localised Surface Water Management Plans (SWMPs) – preferred strategies for the coordinated management of surface water flood risk within a given area. In the South Essex SWMP (2012), surface water flooding was highlighted as an issue causing problems in localised areas in Basildon.

Basildon University Hospital is located in South Essex, in the South East of England, which is nationally in the top 10 areas at risk of pluvial flooding (surface water flooding). It is also located in a Critical Drainage Area – specific areas of interest with severe drainage problems which could pose more of a threat or have higher chances of flooding. It is also a heavily urbanised area where retrofitting natural flood management measures is particularly challenging. This challenge is further exacerbated by the sensitivity of the location – works were undertaken in two courtyards in the cardiothoracic centre, where there was very limited space available and 24/7 emergency access had to be maintained.

By retrofitting rainwater gardens in two courtyards and reinstating a washland (flood attenuation basin) in a derelict area next to the cardiothoracic centre, the project improved the hospital’s resilience to surface flood risk, integrating at the same time improved functionalities for the hospital staff, patients and visitors. At the same time a small number of residential properties were protected downstream. 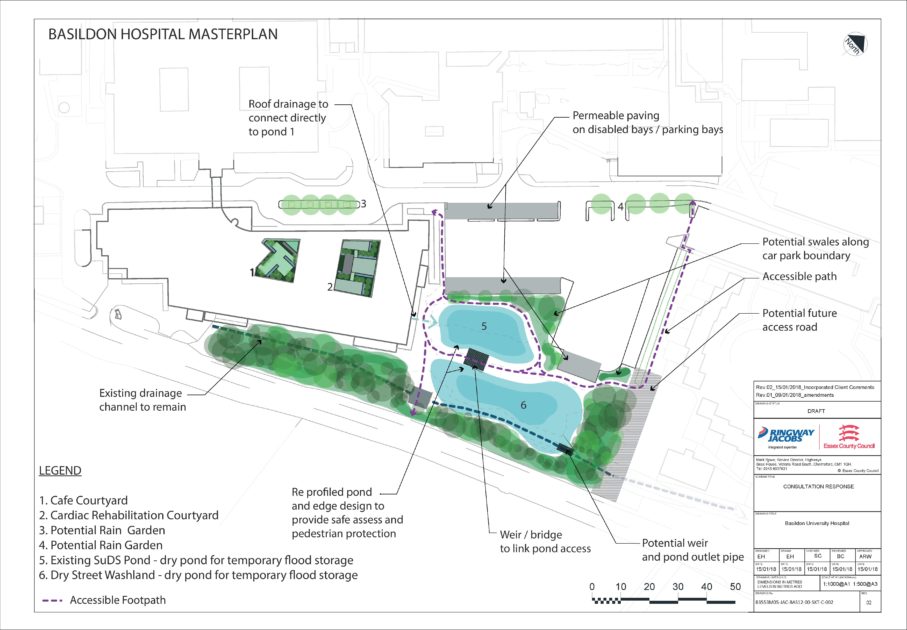 What have we done?

Initially, a combination of concrete paving and gravel/cobbles occupied most areas within each courtyard, with numerous rainwater downpipes draining directly into underground surface water drainage systems. Each courtyard was landscaped to improve the usability for patients, staff and visitors by creating a series of raised planting beds where shrubs and other smaller plants were planted. Seating was also provided around some edges of the new planting beds. Construction of the raised planting beds was achieved by using gabion baskets with a geotextile lining to contain the soil and other planting materials. The gabion baskets also incorporate new wooden seating in certain locations. The existing rainwater downpipes within the courtyards were diverted to feed into new rainwater planters. Rainwater filters through the rainwater planter units and then back into the surface water system via the existing inlet gully at the bottom of each downpipe. Existing concrete paving slabs were pressure washed and re-used to minimise the need for removal of existing materials from the courtyards. Smaller block paving units were installed to improve the visual appearance of the paving; these blocks were also utilised along the perimeter of paved areas to serve as part of an edging restraint. The design has attempted to limit heavy-duty works where practical. The environmental impact of the project was significantly reduced by the re-use of existing materials and the sourcing of sustainable materials where possible, together with the limited use of machinery. 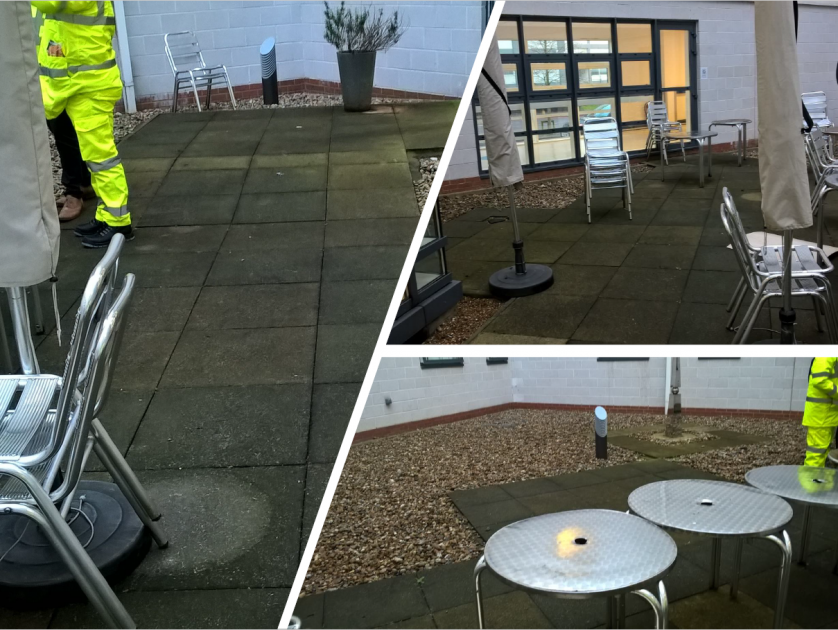 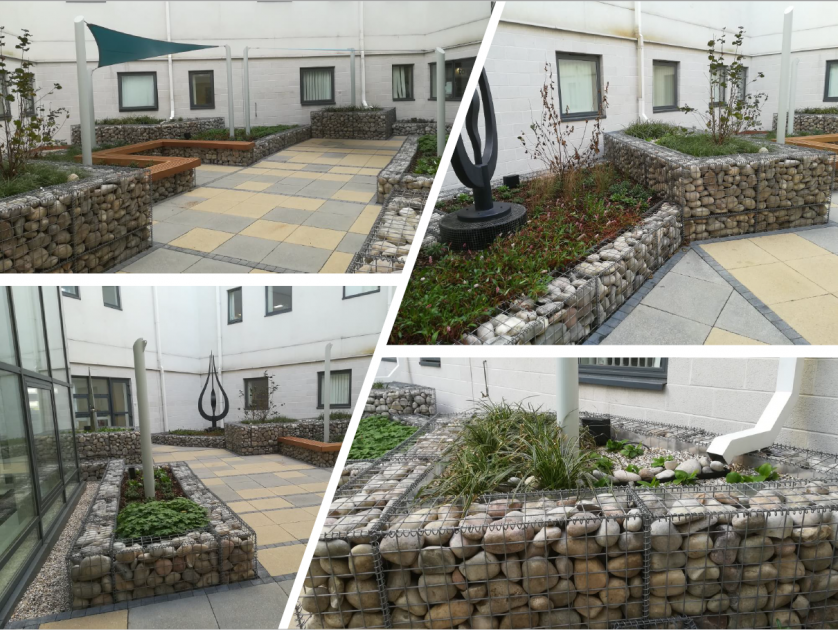 The second phase involved the reinstatment of a derelict flood attenuation basin, next to the hospital’s cardiothoracic centre. The works included:

This area will act as a multi-functional space by protecting properties downstream as well as creating an open, attractive area for all hospital users, including patients and staff. 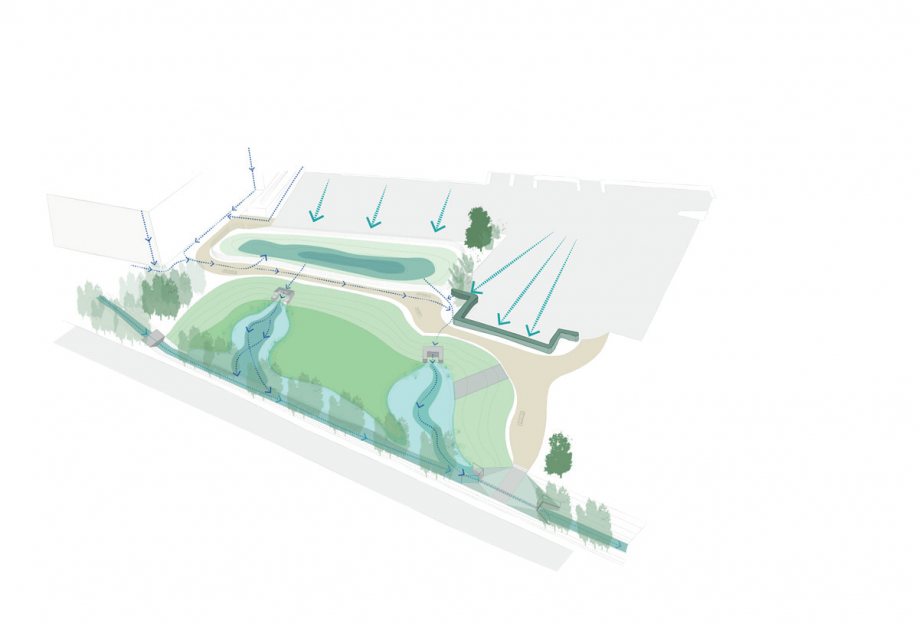 Critical to the success of the project was the involvement of the hospital’s staff who helped coordinate the hospital stakeholders and assisted in identification of suitable locations, contributing to all project stages. 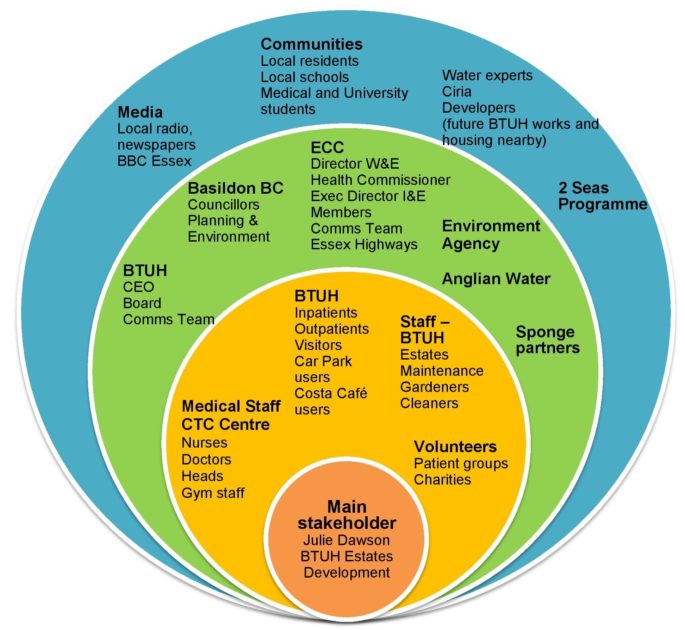 Stakeholder map
Before any solid plans were made a stakeholder engagement event took place, where the council surveyed people of interest – people who will be directly affected by any changes, such as the patients, staff and visitors. They were asked how often each of the sites (courtyard 1, 2 and the pond) are used, what they’re used for, how they feel about the idea of renovating the sites – which the majority were more than happy with – and finally what new qualities they would like after the renovation. Preliminary scheme design was extensively discussed with key stakeholders in meetings and conference calls. Local & County Councillors, the Water Utility company and National Water Body are regularly informed through Essex Flood Partnership Board meetings which occur every three months. The Sponge team also keeps regular meetings with Basildon Hospital estate management team, consultants and contractors to discuss scheme progress and resolve issues.

After some initial stakeholder engagement high level options appraisal of various locations across the BTUH site suitable for retrofitting SuDS were undertaken. Preferred options were whittled down based on stakeholder feedback, cost, buildability and necessary water storage requirements. Analysis also included Hydraulic modelling carried out to determine size and outlet control of the washland area, along with benefits on properties and infrastructure downstream of the site.

The improvements were made in late 2018 / early 2019 and further consultations with stakeholders are scheduled to take place later in 2019 to allow for a few months of experimentation of the new features. The follow-up engagement activities will be used to measure the level of satisfaction within the key stakeholders – hospital staff, patients and visitors.

Courtyard 1 – next to the café:
• Downpipe funnels to direct water directly into the raised planting beds.
• Addition of low maintenance plants on low raised and raised beds for rainwater attenuation.
• Addition of small trees and large shrubs.
• Construction of gabion walls with a natural stone fill as well as integrated timber seating.
• Reclamation and cleaning of existing paving slabs and their reinstatement along with new, darker slabs to enhance previous paving.
• Addition of sail canopy to provide shade.
• Addition of water butt.

Courtyard 2 – next to the gym (Cardiac Rehabilitation):
• Downpipe funnels to direct water directly into the beds.
• Addition of low maintenance plants on low raised and raised beds for rainwater attenuation.
• Addition of small trees and large shrubs.
• Construction of gabion walls with a natural stone fill as well as integrated timber seating.
• Reclamation and cleaning of existing paving slabs and their reinstatement along with new, darker slabs to enhance previous paving.
• Addition of pergola.
• Addition of water butt.

East of the CTC – Pond, washland area, carpark:
• Roof drainage from the building connected directly to the pond.
• Re-profiling of the existing pond and edge to make it safer for pedestrians.
• Addition of a washland which will only fill up at times of heavy rainfall.
• Addition of a weir/bridge to connect the pond to the washland area which will lead to the pond outlet pipe connecting to the previous watercourse.

To assess the effectiveness of the plan, water quality and flow volume tests would be done on the current bodies of water situated on the site and on the exit. After the construction is complete the same tests will be done again to see the effect on the water movement and the user quality amenity survey would be done again in order to compare before and after the scheme.
Schemes and future developments such as this, which implement Sustainable Drainage Systems, can potentially be the first step for a wider use of these solutions to reduce pluvial flooding at significantly lower prices across coastal regions.