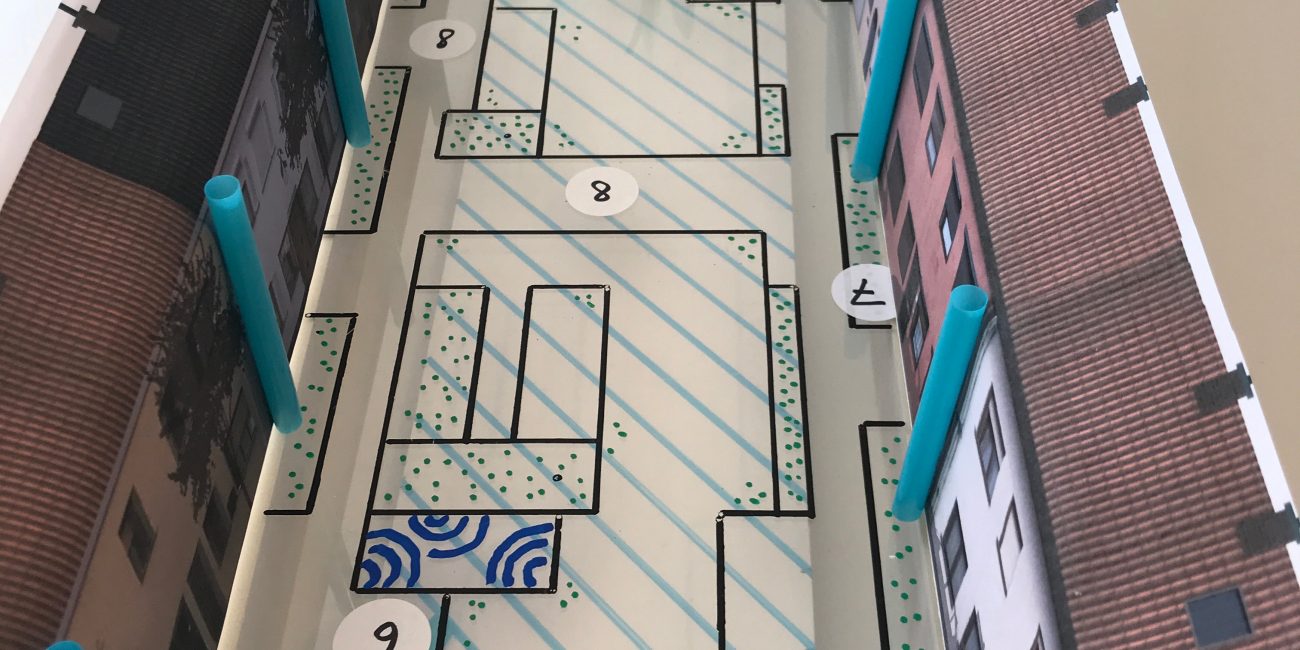 What is a Garden street?

The Antwerp municipality recently launched its ‘Garden Streets’ pilot project. As a prime measure for adaptation to the consequences of the changing climate (e.g. floods and heat stress), the municipality turned 5 regular streets into garden streets.

Integrating vegetation planting into a street produces a myriad of advantages, like prevention of extreme heat and an increase of biodiversity within the city. Offering a more serene, quiet and natural streetscape thus increases the quality of life within a street.

Garden streets also take water into the equation by buffering excess water runoff in case of heavy rainfall. Enabling infiltration of rainwater into the surface and detaching rain pipes help alleviate pressure on the sewerage system. Rainwater can be led directly to planter boxes in the street and children can pump up water in a playful way to run a small river through the street. And then there is the social aspect of course: giving back the street to its residents by making it an enjoyable place to be, rather than a place to merely pass through. An altogether different experience.

Each garden street has been designed with consideration for its specific urban context, location and residents, which is why they all diverge.  Publicparticipation has been a prominent feature in the design process too, with residents establishing what the garden street should look like and what is attainable for them.

The concept of a permanent garden street hasn’t been established thus far. Popular demand however, demonstrates the necessity to start considering this. The Antwerp municipality regularly receives applications from residents wanting to experiment with greening their streets.

Through this pilot project, the municipality aims to experiment with a new approach: cooperating with residents, applying new techniques and dealing with maintenance after construction. The pilot project intends to optimise all those aspects and obtain broad popular support, so as to take away possible hurdles and make it easier to scale up the concept in the future. The process runs through different stages.

At the start of the process the design teams (consisting of a project leader, engineer, designer and communications officer) went to the selected streets and got acquainted with their residents. During this first meeting, the team elaborated on its intent to establish a garden street, thereby explaining in broad strokes what a garden street exactly is and why the municipality is keen on experimenting with it. Notable is the fact that these first meetings took place in an open atmosphere and that no concrete plans or designs were yet proposed to the residents.

In the second stage, residents were put to work by shaping their ideal version of a garden street during a workshop. Using plans and two dimensional mock-ups, the residents collectively decided on the in’s and out’s of their garden street. The results were presented to the neighbourhood during a third meeting, inciting the following questions: where in the street would you prefer planting and what kind? Would you like to have your façade overgrown with planting?Would you prefer demarcation of planting areas and if so what kind?  How exactly do you envision the ‘the street river’ to look? What is your take on maintenance?

For the municipality, too, ‘Garden streets’ are a novel concept. In order to maximize the gains from the design process and implement input from the resident into the design, the project teams organized a ‘Design Sprint’. During these intensive multi-day sessions, the teams worked on tangible products to implement in the streets and thought about how to set up the experiments proceeding the actual construction of the garden street. The Design Sprint concluded with an exhibition in which the teams demonstrated prototypes and concepts to residents and policymakers.

Several experiments were held during the summer. As a test, specific guidelines from the preliminary design were being mimicked in the selected street in this stage. Residents were therefore able to experience what it would be like to actually live in a garden street, rendering the necessary input to draft the final design. This experimental stage kicked-off with all the residents collectively planting vegetation in the street, making the concepts from the preliminary design tangible and visible within the street scape. Already in this stage, resident were in charge of maintaining the plants.

Every garden street project is the product of a broad partnership. Each garden street has its own project team consisting of a project leader, designer, engineer and communications officer. An indispensable partner in this project was sewerage system administrator Water-link. For them, the quest for new ways of dealing with heavy rainfall is particularly interesting, because enlarging the sewerage system throughout the city isn’t feasible from a technical and budgetary point of view.

Also within the municipal administration, a lot of departments had been involved because of the many different aspects that had to be taken into account, e.g. Stadslab2050, the environmental department, the maintenance and upkeep department, the societal advancement department, the green space management, the Eco house, City Makers, etc.

And last but not least the residents themselves, because they’re the alpha and omega of this entire project. They are going to have to live in the garden streets. The fact that the changes in these streets might affect them the most, makes their input all the more important. That’s why the residents have been closely involved from the very start of this pilot project. Their feedback and cooperation during the experimental stage has been invaluable and they will be in charge of maintenance and upkeep once the garden streets are established. The residents are the protagonists in their own street.

Once the experimental stage comes to a conclusion at the end of November 2019, a final design will be drafted, the procurement and tendering procedure will begin, a construction schedule will be drafted and utility works will follow, proceeding the actual start which is estimated to take place in the autumn of 2019.