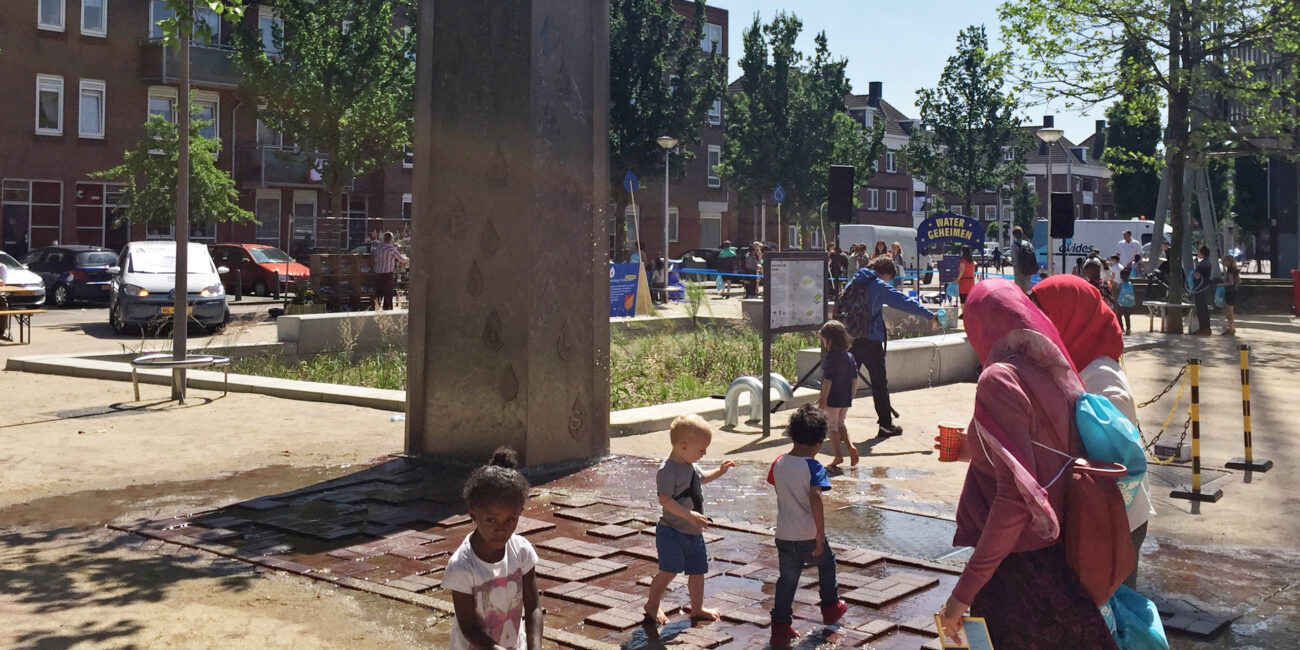 Instances of both flooding and drought are increasing. The Urban Water Buffer (UWB) was developed to provide a solution that both mitigates flooding and addresses water shortages, the latter of which are exacerbated by drinking water being unnecessarily used for low-grade purposes. The UWB stores much of the rainwater that falls locally in the urban area for later use. In this way, rainwater surpluses and water shortages can be more balanced over longer periods of time. Because there is not enough space in the urban area to store this water above ground, the UWB stores it in aquifers in deeper sandy layers. The rainwater can then be recovered as needed via wells.

A broad collaboration of knowledge institutes, engineering firms, suppliers and end users made it possible to investigate whether the UWB could make a positive contribution to preventing flooding and improving water supply in cities. Locations in The Hague, Rheden and Rotterdam served as case studies in which the spatial, hydrological, chemical and financial impacts were illustrated, as well as the necessary management.

Using the local water issues as a starting point, the designs were developed in more detail. In Rheden and in Rotterdam, pilot schemes were created in 2017 and 2018. These field trials provided insight into the actual impact of a UWB on the water issues and on the existing urban water system. In each trial, operations and water quality were extensively monitored for at least one year.

Despite the presence of a separate sewer system, the Spangen district of Rotterdam suffered from street flooding during heavy rainfall. In addition, residents wanted to make public spaces greener. The local soccer club Sparta was an end user that used a lot of drinking water, especially for sprinkling the artificial turf field. Their participation in the trials allowed for experimentation with finding solutions for both of these issues.

In 2018 an Urban Water Buffer was realised near Sparta’s stadium. Rainwater that falls on the stadium and on the paved surfaces around it is now collected in a buffering feature called a Cruyff Court, which consists of crate system under the soccer field. The polluted rainwater is purified by a natural, planted purification system (biofilter) and is then gradually infiltrated into the aquifers. The rainwater stored in these deeper sandy layers can later be recovered for sprinkling Sparta’s artificial turf field and for cooling the air on the square near the stadium via a water pillar. 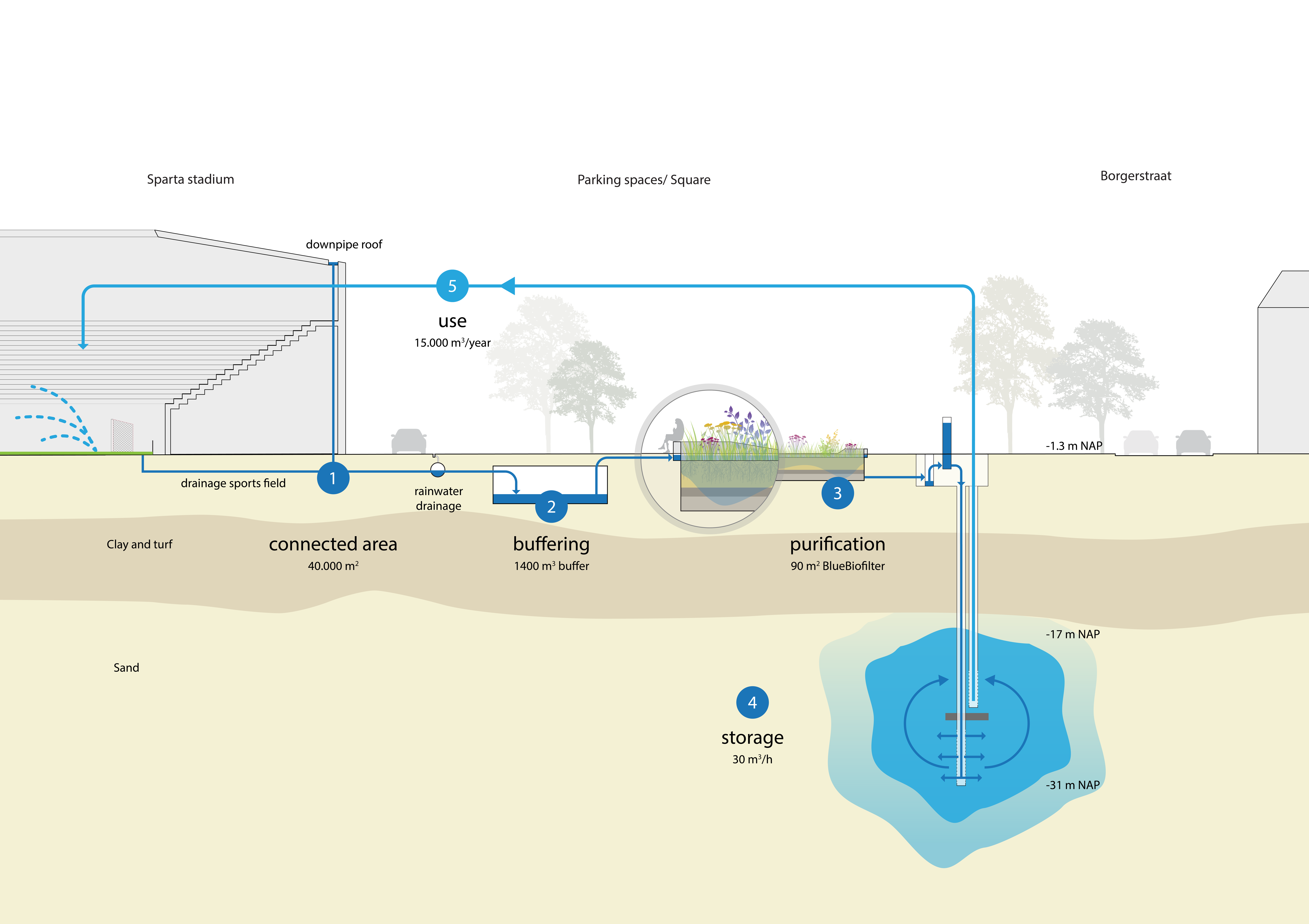 The treated rainwater that infiltrates the soil is tested to ensure that it meets soil protection requirements. Existing elevated concentrations of iron, manganese and zinc, among others, which can increase the risk of clogging and contamination in the system, are reduced by the biofilter before infiltration. Relatively high concentrations of iron and calcium have been measured in the reclaimed water, but this does not cause any problems.

The realisation costs of the UWB in Spangen were 1,169,000 euros (800,000 of which went to the Cruyff Court under the sports field), and the maintenance costs for 40 years are estimated at 480,000 euros (based on the first year of operation). Based on a conventional cost-benefit analysis, there is no reasonable payback period for the investments in the UWB Spangen. However, if the indirect effects (reduced burden on the sewer system, spatial improvements and CO2 reduction) are included, there is a positive balance of 285,000 euros.

The municipality of Rotterdam and the Delfland Water Board had a specific task for the Spangen neighbourhood, namely to limit flooding. With the 1400 m3 crate buffer system, there is now 31 mm less overflow to surface water than before the Urban Water Buffer was installed. In other words, 4 ha of paved surface has been mitigated. Precipitation now infiltrates the ground, and the effects are limited to an increased rise in the aquifer level; there is little or no impact on groundwater level. Based on the model results, approximately 70% of the infiltrated water can be successfully reclaimed without significant mixing with the brackish groundwater. It is estimated that soccer club Sparta can save approximately 15,000 m3 of drinking water annually by using water collected by the new UWB.

The municipality of Rotterdam, the ‘Natuurlijk Spangen’ (Natural Spangen) foundation and the Sparta soccer club each had their own specific wishes for this project: to realise a spatially adaptable system, to preserve the number of parking spaces, to make the area greener, and to increase the availability of sustainable and reliable fresh water. The above-ground spatial integration of the UWB, with the biofilter and the Cruijff Court, has improved the quality of the Sparta stadium square. 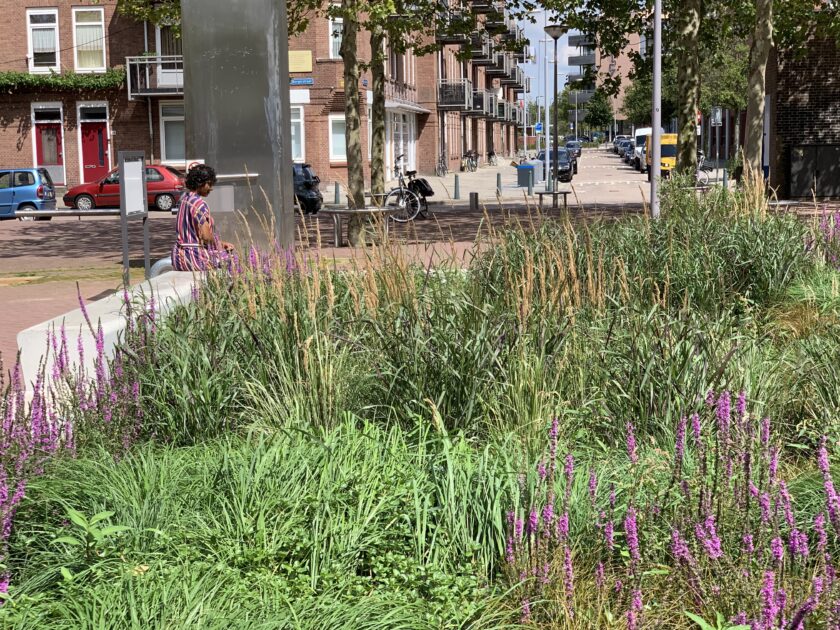 A large part of the UWB is located underground. The visible components and technical installations are spatially embedded in various ways. The biofilter is integrated into the stadium square as a green area with edges and seating elements. By designing the pressure pipe as a water pillar, the UWB system has been made more visible to the residents.