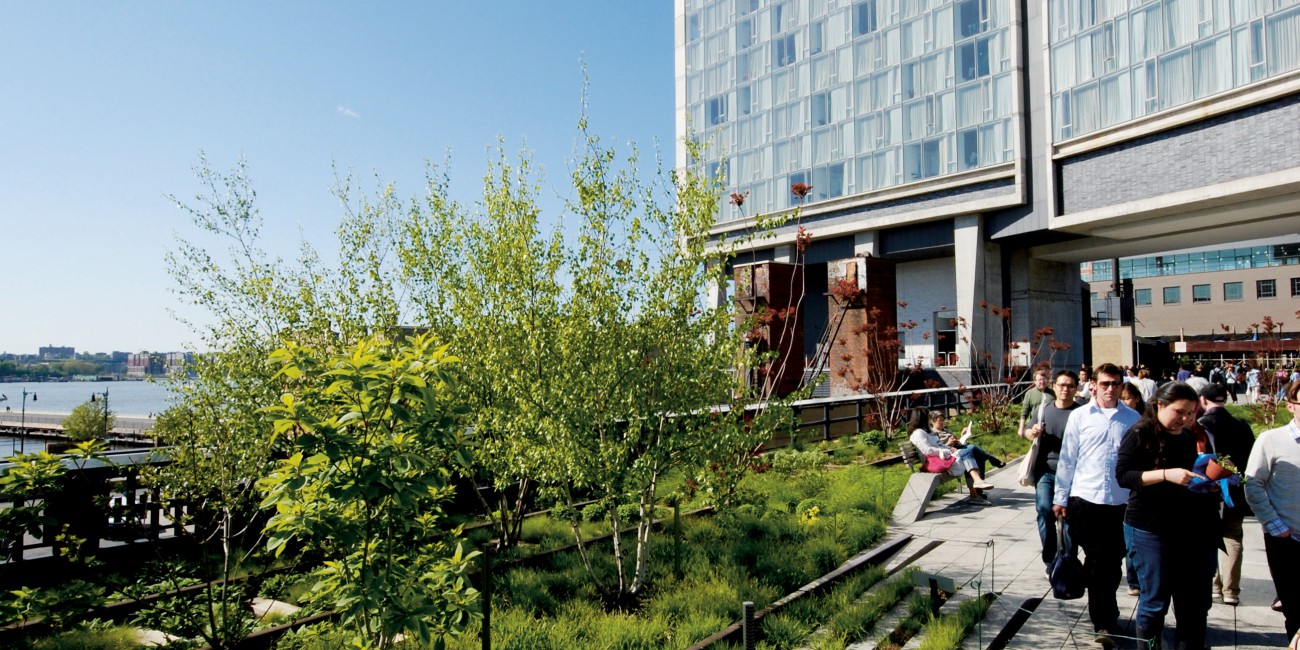 The High Line in New York is an example of the city’s redeveloping its older infrastructure into public space. In the 1930s a train track was raised to a level of 10 metres on the west side of Manhattan in the largest industrial district. This was done at a time when the safety in the traffic-filled streets could no longer be guaranteed. This resulted in a 21 km raised track which travelled straight through the city’s quarters, alleviating the busy avenues.

From the 1950s on, use of the High Line decreased steadily, partially due to the increase of freight trucks, and it finally went out of use in 1980. In 1999 the existence of the High Line was threatened, as plans were made to have it demolished. A non-profit organisation ‘Friends of the High Line’, together with the City of New York, explored ways to preserve this historical structure for the city in the form of a new public park.

In 2002 the project gained momentum and a design team was established consisting of (landscape) architects and professional gardeners to design a public landscape structure within the existing train line. In 2006 construction started on the new design which is being implemented in three phases. On June 9th, 2009 the first section was opened, from Gansevoort Street to West 20th Street. The second section, from 20th Street to 30th Street was finalised in the spring of 2011. The third and final part of the line is currently still under development. [The High Line, 2011]

In the design of the High Line, footpaths cross old parts of railroad track of the original line, the footpaths are lined with trees, grasses and plants with a variety based on the spontaneous landscape which developed naturally in the decades the line was left in disuse.

Trees and plants which started growing along the tracks of their own accord have been incorporated in the vegetation design of the park landscape. The design intends to sustainably continue the existing natural setting which developed naturally in the area. Together with the long linear structure of this park, it contributes to the increase of biodiversity in this area.

The arrival of the High Line has also given the neighbouring areas an incentive. Various commercial and cultural projects are being developed around and along this new city park [Wilson, 2011].

The park is also safe, thanks to the clear visibility from the adjacent buildings, and due to its being much higher than other park structures in the city [Wilson, 2011].