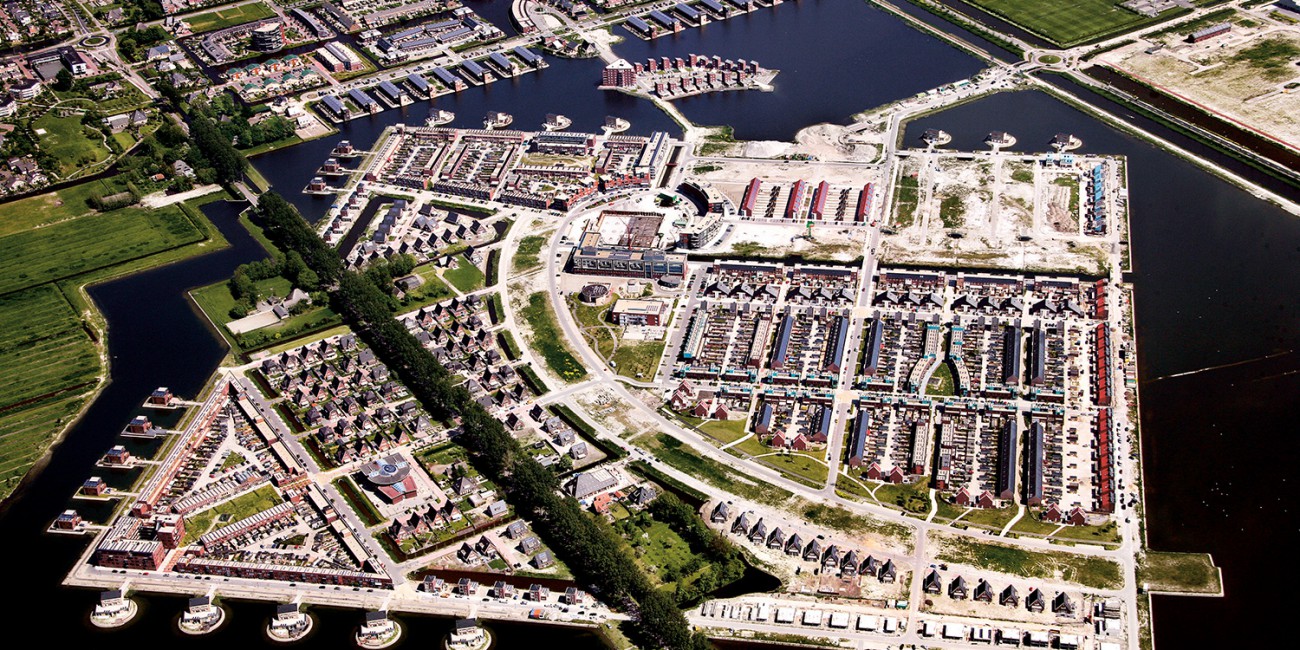 ‘De Stad van de Zon’ is the first CO2-neutral district in the Netherlands; moreover, a great deal of attention was put into the district’s water mission. The large water presence in ‘De Stad van de Zon’ (approx. 33%) serves as water storage and for recreation. ‘De Stad van de Zon’ takes its name from the large number of solar roofs, which generate enough energy to cover all the electricity consumed by the 1400 homes. 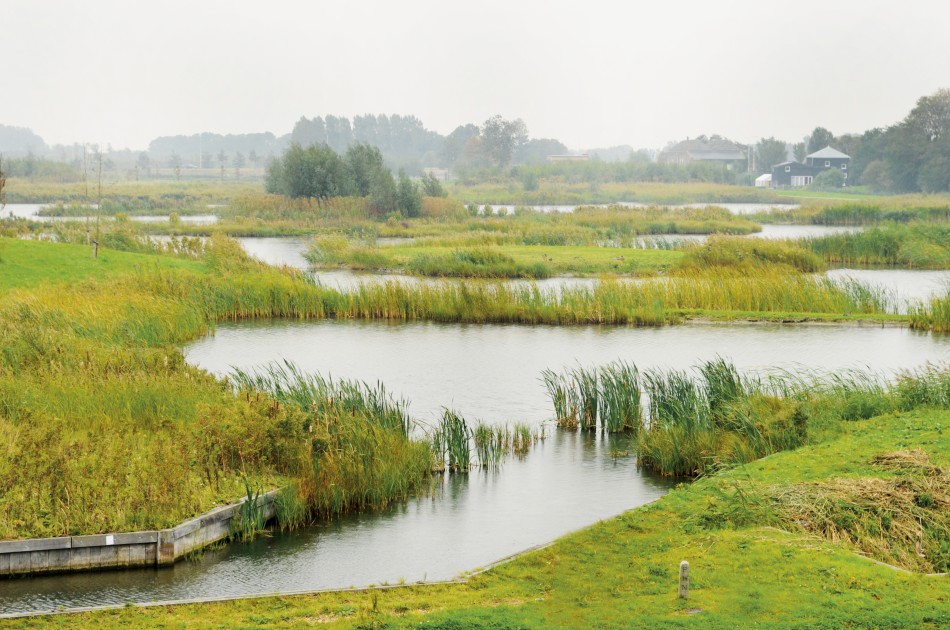 The active solar energy is produced by applying 2.45 MW photovoltaic (PV) solar panels on the roofs of the houses and the various facilities. This is part of the 5 MW PV-project in which the municipalities Alkmaar and Langedijk participate. ‘Stad van de Zon’ in Heerhugowaard was with 2.45 MW power capacity realised the biggest partner in the European SUN city project. The goal of this project was to increase the use of PV panels and to bring the European energy targets closer. The district itself produces the same amount of energy that it needs for living, working and traffic. In addition to the realised active solar energy houses, three wind turbines were installed in the recreation area. [Stad van de Zon, 2012]

The large pond surrounding the district’s Central Square is of swimming pool quality and acts as a recreational pool and a rainwater buffer. A specific water system has been created for the area, which is not connected to Heerhugowaard’s food-rich and polluted polder water. The system is fed almost entirely by relatively clean rainwater running off from the district’s roofs. The ground level in De Stad van de Zon is raised to prevent seepage of polluted water. 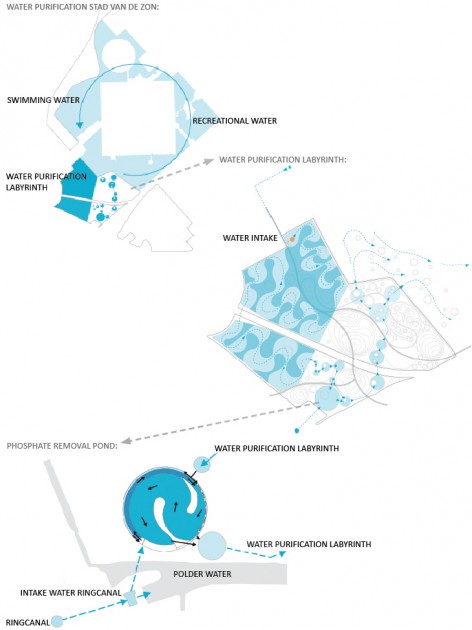 The system was designed so as to be capable of handling large differences in water level. During the summer, the level can drop by 40 cm compared with the average level. During the winter, the water level can be up to 30 cm higher than the average of 3.30 metres below sea level (the average level in De Stad van de Zon is 60 cm higher than the average polder water level). The fact that the design allows for such a degree of flexibility in water level fluctuations means that the district is ready for greater than expected precipitation volumes and dry periods caused by climate changes.

Nevertheless, in unusually dry summers it might be necessary to let in water. To prevent this from harming the water quality, a water purification system has been installed at the entry point, where the incoming water passes to a dephosphorisation pool. 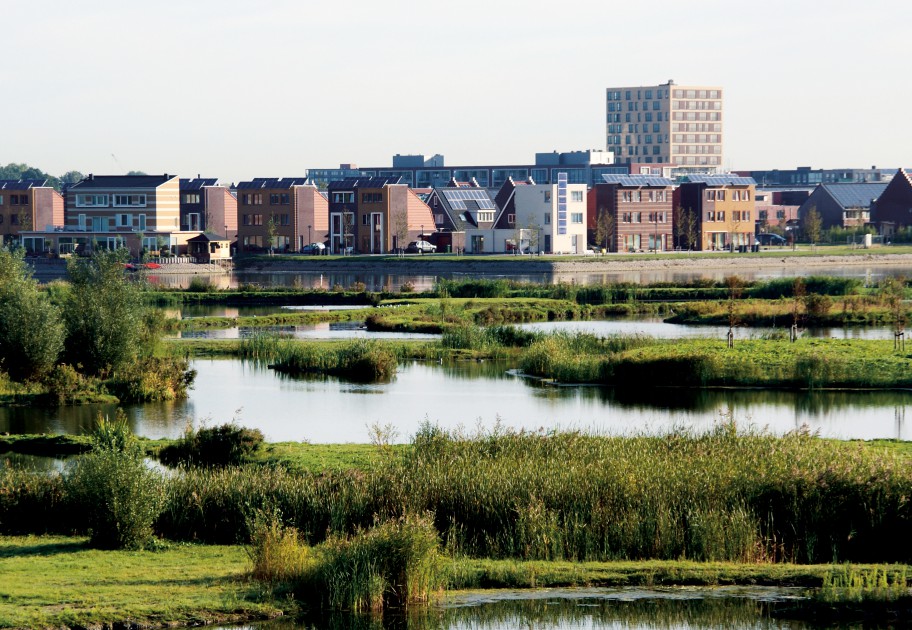 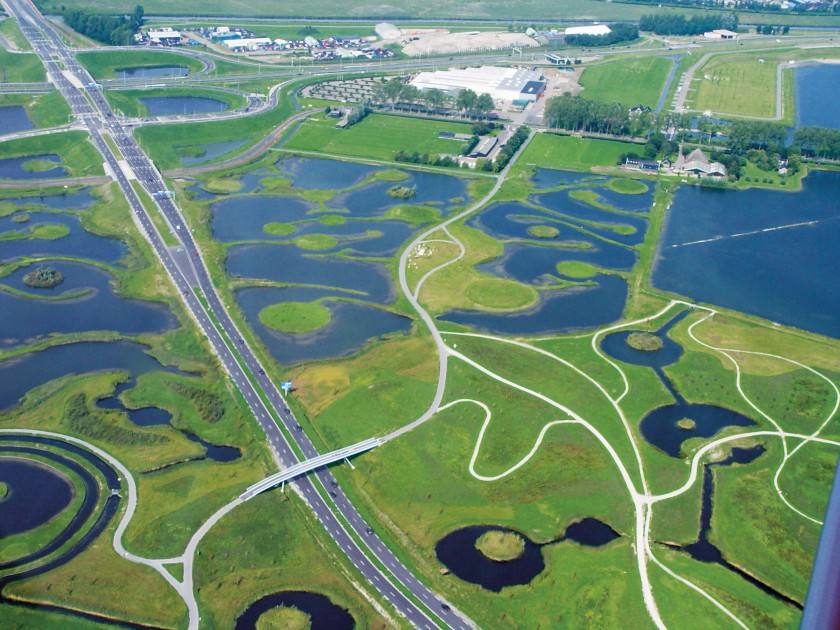 The district’s area is divided into three parts: one part is reserved for water, one part is built-up and one part is used for nature and recreation. The area reserved for nature includes a labyrinth of streams for purifying the district’s water. In that labyrinth, with its natural banks and large quantities of water plants, the water is purified in a natural manner. A circulation pump has been positioned on the southern edge of the pool. The form of the central square creates several blind corners in the flow pattern. The water quality is monitored: if the water becomes too polluted, it can be pumped through the purification system at the inflow point to improve the water quality.

All the surface water, including the town moat that was dug, can be used for canoeing or sailing electric boats. Boats powered by fossil fuels are not permitted in De Stad van de Zon. [Pötz et al., 2009]