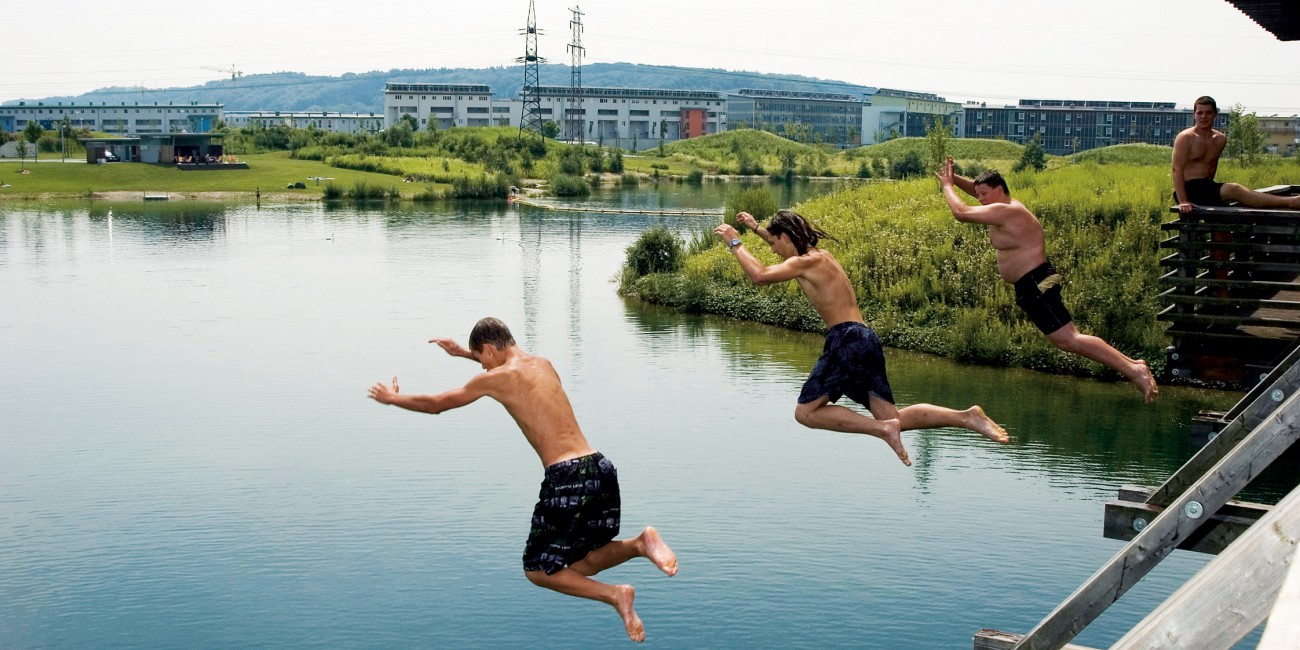 Linz, an Austrian town situated in the narrow area between the Traun and Danube Rivers, was in urgent need of expansion. However, hemmed in between the two rivers as it was, it was no easy task to find a suitable place for that expansion. Plans to build in the rural and ecologically important washland (riparian strip) gave rise to much concern. As a consequence, it was decided from the earliest inception that a project should be realised of a high architectural and ecological quality.

The design was inspired by green garden cities with flowing transitions between gardens, parks and landscape. Atelier Dreiseitel, which specialises in ecological landscape designs and water concepts, won the competition to design the landscape.

A great deal of effort was devoted to ensuring a low level of fossil fuel consumption. Ultimately, 25,000 people will live in Solar City Linz, divided across five centres. The first phase of the project involves 32.5 hectares of building land and will offer housing to 4,500 people, together with the necessary facilities and 20 hectares of parkland. 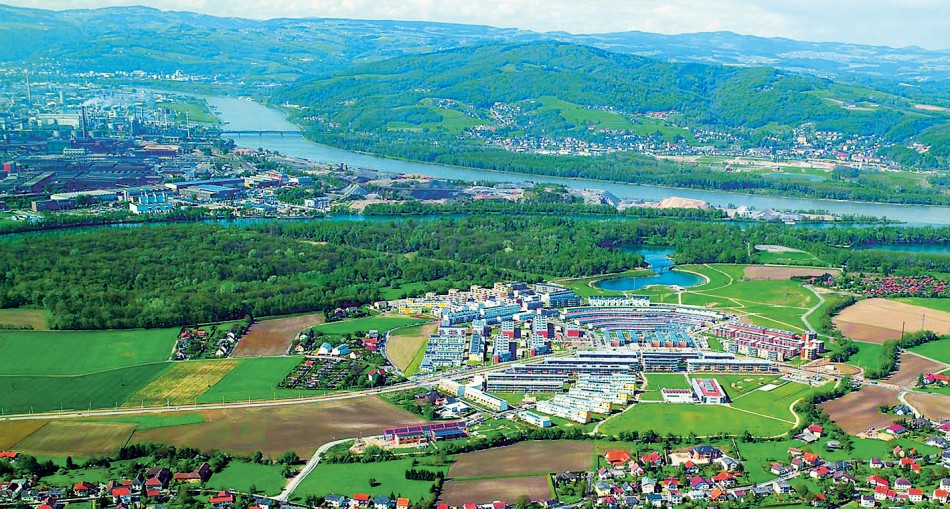 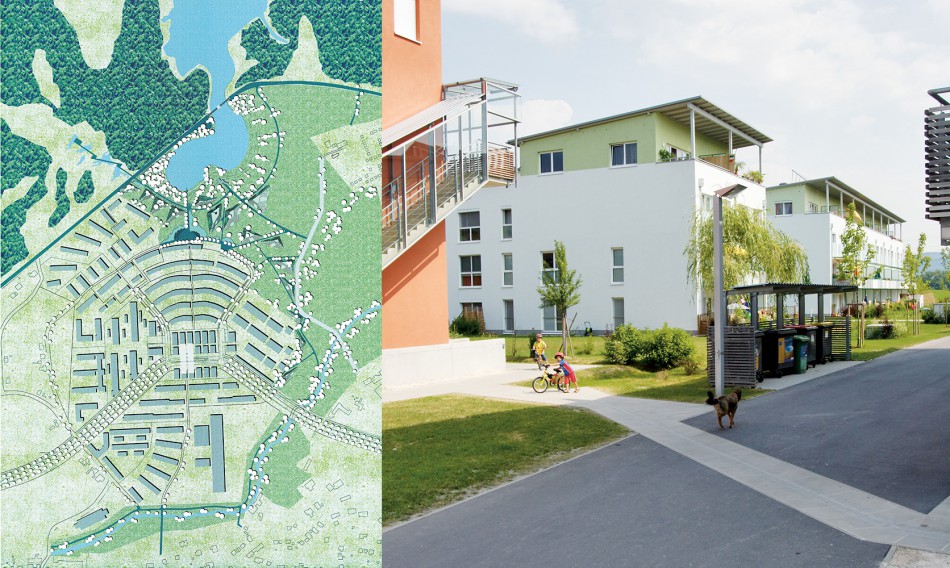 The adjacent washlands were assigned a protected natural function (as a Natura 2000 area) to accommodate the concerns of environmental conservationists. As such, the mission for the landscape architect was to use the design for the residential areas to ensure that the natural values of the protected areas would not be harmed by the building mission.

The project includes a range of recreational facilities such as a natural swimming pond, a water playground and large quantities of vegetation to keep the residents close to the built-up area.

For the water concept, this meant that the original groundwater balance needed to be maintained and the new water management system should continue the existing situation as much as possible. An elaborate system of small rainwater drains, bioswales, ponds and brooks lead the rainwater from the buildings to the woods in the washlands.

Groundwater supplementation and permanent and temporary wetlands serve to preserve the existing water balance as much as possible.

The manmade wetlands and green zones have been occupied by the local flora and fauna and rare species occur up to where the built-up area starts. According to surveys, the large amounts of vegetation and the swimming pond fed by rainwater are highly appreciated by the residents.

A dry streambed, the Aumühl, has been restored to its former beauty. A total of 1500 new trees have been planted in the parkland and along the Aumühl stream, to enhance the green quality. 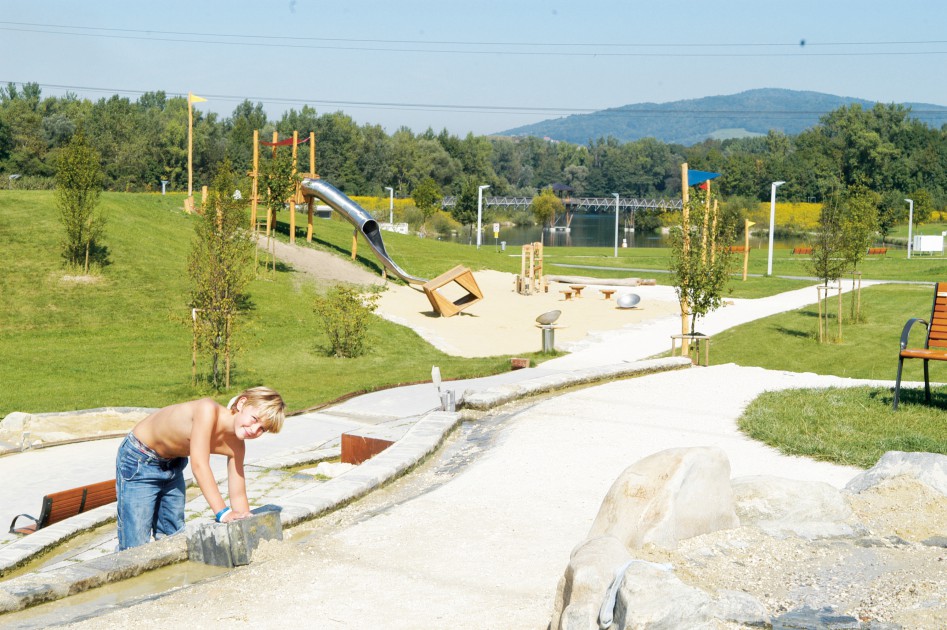 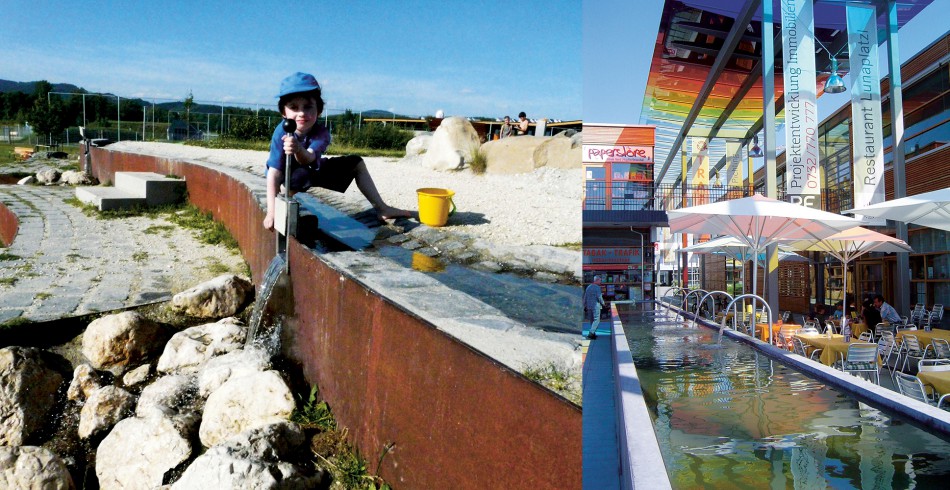 As a pilot project, a decentralised water purification system has been set up for 88 homes and a primary school. That system serves as a research facility for studying the various aspects of decentralised waste water purification and, if possible, for working toward amending the applicable regulations. In Austria, like in the Netherlands, all buildings in urban areas must be connected to the sewer system.

Toilets have been installed that separate urine and faeces. The solid matter is turned into compost. The fluid waste is purified in the helophyte filter. The urine is captured in basements for use as fertiliser. The helophyte filter has been integrated into the parkland, though for safety reasons it had to be fenced off.

Acceptance on the part of the residents and the functioning of the system are monitored. The system as a whole is not without its problems and makes demands on the users. As such, it is uncertain whether this system is suitable for use on a large scale.

The decision to hire famous designers and to issue competitions for architecture, energy and water concepts has resulted in a district with an extraordinary degree of quality in terms of architecture, nature development, urban development and sustainability in a broad sense.

The extraordinarily successful project Solar City demonstrates once more what can be done with an ambitious and visionary planning process and strong plan drivers. Municipal administrators took the initiative and hired quality design partners. The municipality made the initial investments and controlled the whole proces. [Dreiseitl et al., 2006] [Moet et al., 2008]