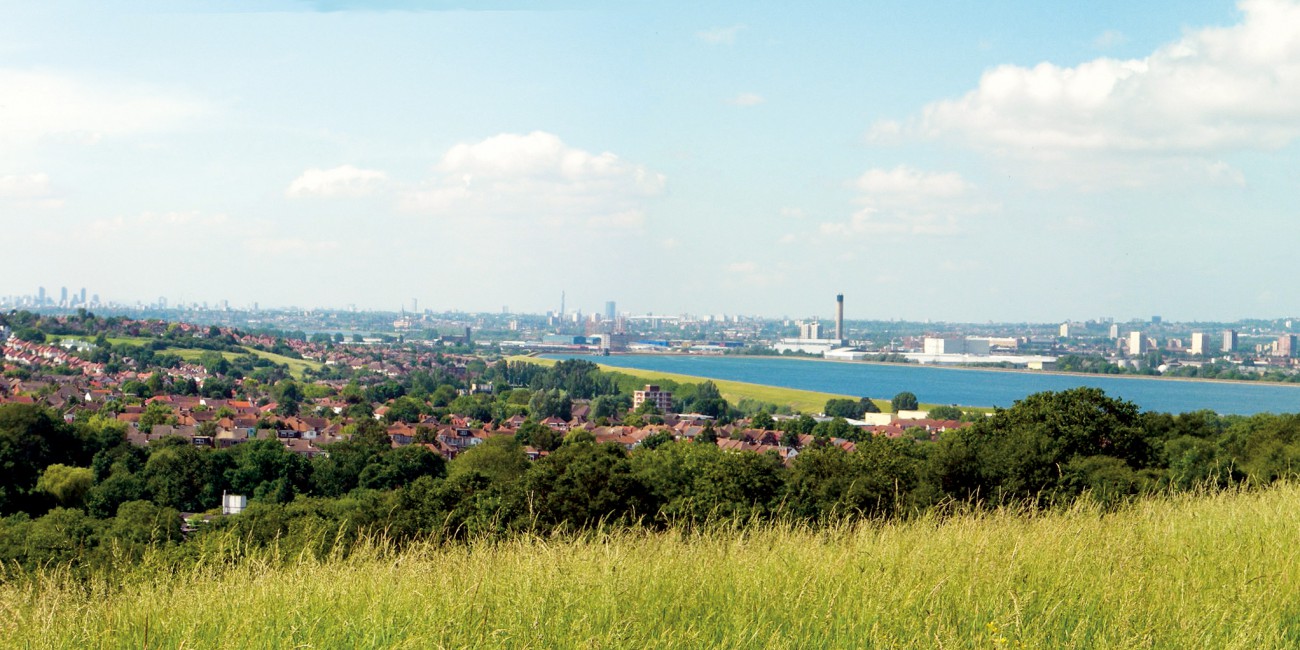 London, Urban Heat Island: A Summary for Decision Makers was published in 2006. With that publication, London put forward the concept of heat stress as an important parameter for spatial planning. It can be seen as one of the starting points of the East London Green Grid project.

The background to the publication lay in the heat waves and their adverse impact on the London economy at the start of the 21st century. The prediction is that by 2050 the average summer temperature in London will be as hot as in the summer of 2003.

In concrete terms, this means that summer temperatures will by rise 3°C and the number of tropical days per year will increase by ten.

The difficulties and damage that were experienced in 2003 and that are predicted for the future can be broken down into a number of categories:

The measures presented are broken down into three levels of scale:

The plans for the East London Green Grid include a strategy to vein East London with green-blue structures. The purpose of this strategy is to create natural urban systems that support and permit growth. It is the intention that an urban landscape be realised that creates links between the areas where people live and work, public transport hubs, the Green Belt around London and the Thames. 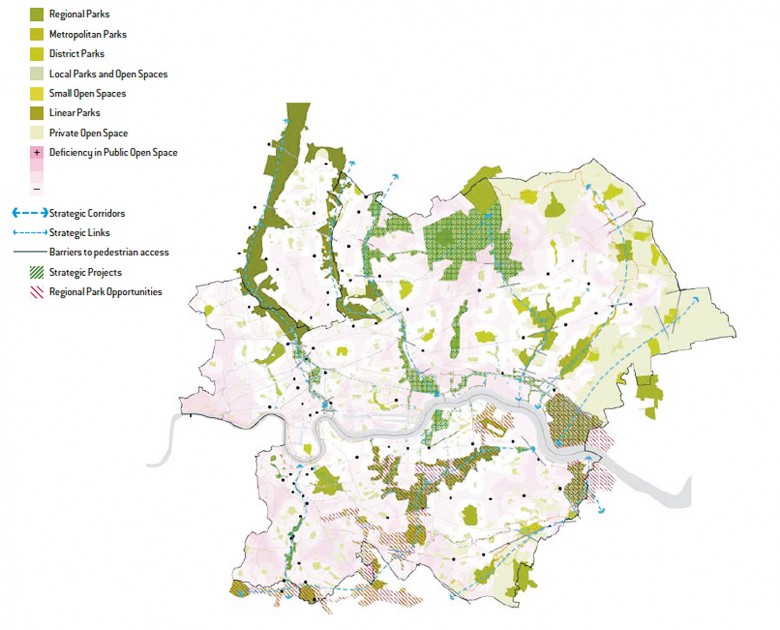 These green-blue structures serve explicitly to buffer water, enhance the quality of the air and lower the air temperature. Opportunities for developing the green structures exist along the tributaries of the Thames, where industrial estates are opening up. Another measure is to connect as many areas of urban vegetation as possible through purchase or zoning changes. In all, the East London Green Grid Master Plan identifies 300 projects, to be realised in three phases. The first series of the 300 projects will be completed in the coming years. 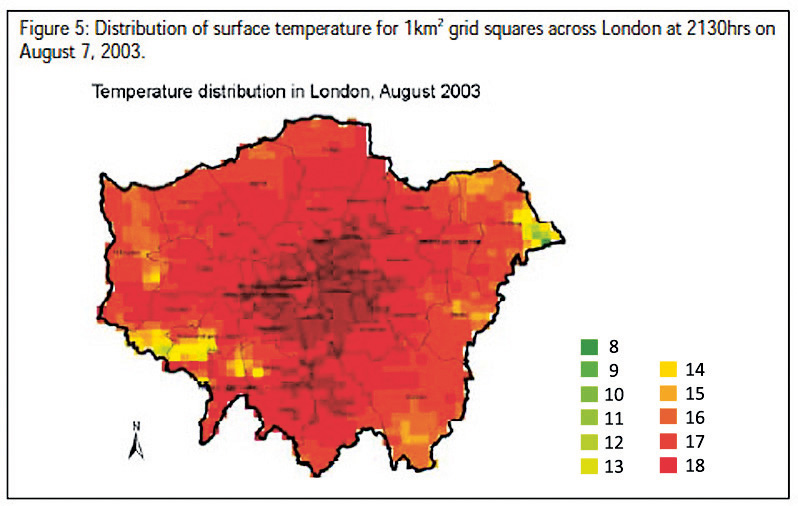 Distribution of surface temperature (in Celcius) for 1 km2 grid squares across London at 21:30hrs, during the heatwave on August 7, 2003 © Greater London Authority, 2006

The plans for East London show that an urban conglomerate such as London feels that a relatively finely-meshed green (and cool) urban infrastructure is vital in order to realise a sustainable city. The presence of green structures has been linked directly to the target of a healthy urban environment. The city is convinced that the green-blue grids will become healthy carriers of new economic and other developments. The plan calls for an investment of around 250 million pounds [Greater London Authority, 2006].

The Lee Valley Regional Park, along the western edge of East London, includes a number of green areas that offer an important habitat to flora and fauna. The area is part of the London Green Grid. One important reason to make this one of the first areas to be tackled is the fact that it includes the Olympic Park. 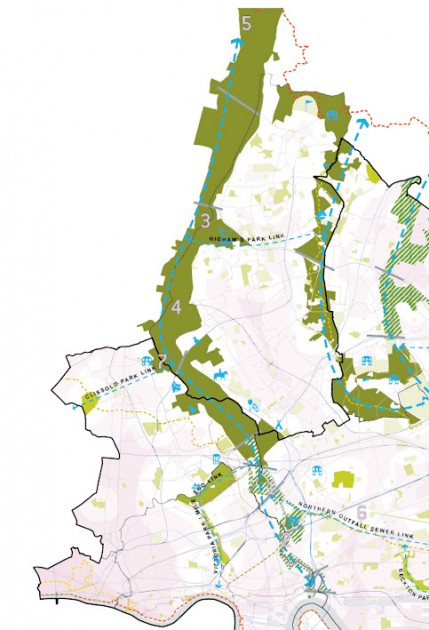 The expansion of the green grid to include the Olympics and the park created for the Games makes this project an important boost for this area. The expansion will improve not only the health, in terms of more green areas in the city, but also the social wellbeing of the residents. The park for the Olympics is seen as a catalyst that will improve the green grids in the Lee Valley. One of the ways in which this will be achieved is by making the area easier to reach and by expanding it for both people and nature. Eventually, it will become a green zone of more than 40 km in length along the Lee River connecting the Green Belt to the Thames. This project calls for the realisation of 61 hectares of new parkland.

The project includes slow traffic routes, sports facilities and cultural/archaeological sites and will form an important ecological link between the Green Belt and the Thames [Natural England, 2011].

In 2012 the Olympics were held in London. One of the reasons why the city won the bid in 2005 to host the Games was because it submitted an ambitious plan to make the event more efficient and less wasteful. Many existing locations will be used, and the possibility exists to transform buildings in the area after the Games to create more than 3,500 homes. 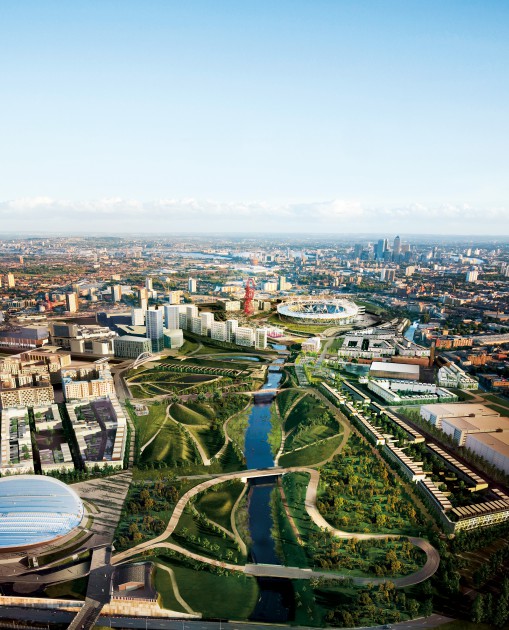 Impression of the Olympic Park. After the Games of 2012 it will be named Queen Elizabeth Olympic Park © [image from Olympic Park Legacy Company, 2012

The Olympic Park is located in the Starford area of East London: a neglected industrial area in urgent need of revitalisation. Once the transformation is complete, the Olympic Park will be largest park created in Europe in the last 150 years. Besides the creation of more green areas, public transport access to the locations from the centre of London will be optimised to ensure that the best way to reach the Games is by public transport. After the Games, good public transport connections will continue to play a role to attract locals to the park for recreational purposes.

A sustainability plan has been published, listing five principal goals: