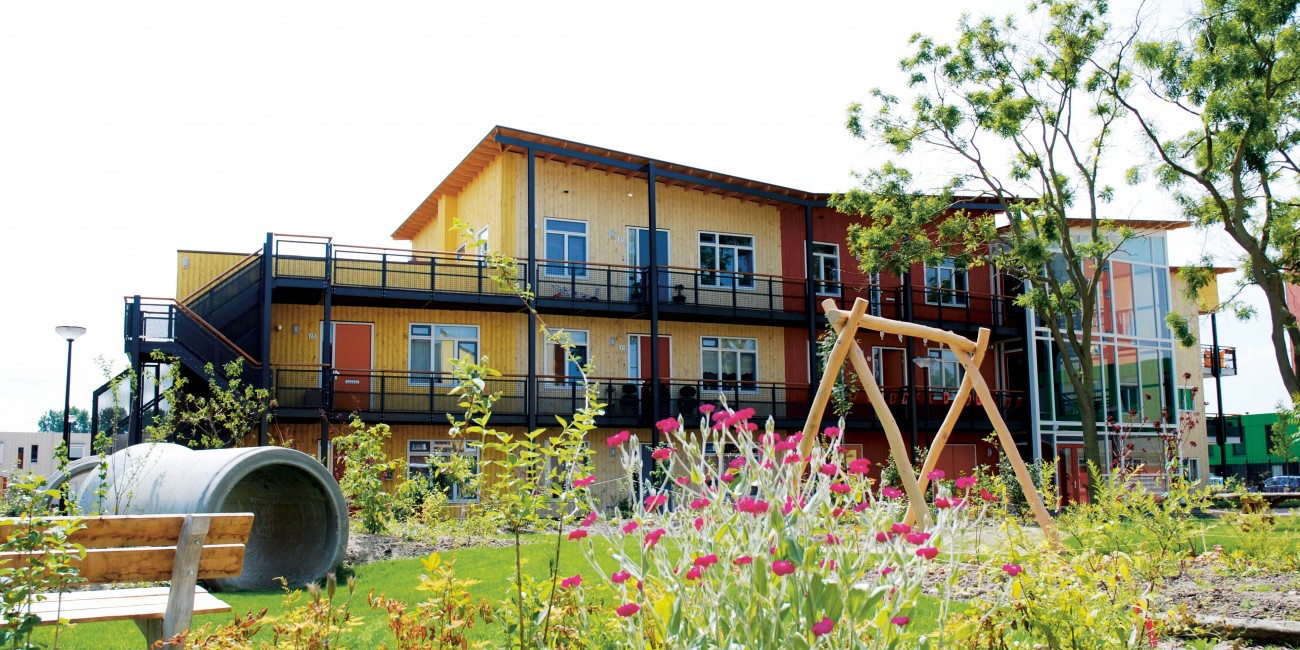 An unusual scheme emerged in the Hoogvliet district of Rotterdam as part of a Co-Housing project. At the initiative of the WiMBY (Welcome in My Backyard!) foundation, and in cooperation with Vestia (social housing cooperation), a group of residents were given the opportunity to give their input on the design of the housing project. 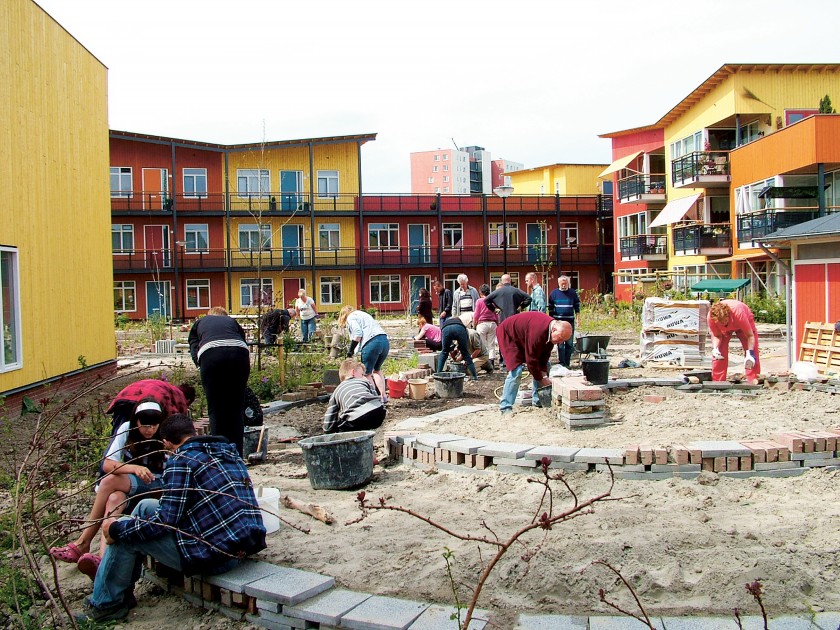 A group of future residents were involved when the architects were selected. Their views of the building instructions and the shape given to the group process led to opMAAT, now atelier GROENBLAUW, being chosen as the architect. The plan was given shape and completed with the assistance of the future residents, based on the vision and results of the workshops. The conditions defining the design were the location and an urban planning vision that called for blocks of peripheral construction along Horsweg road, the budget and the different types of homes defined by Vestia: 28 apartments and 32 ground-level homes. Public housing and owner-occupied homes were realised.

The participation process started with Saturday workshops about the urban design, followed by more workshops about the designs for the homes and, parallel to these workshops, other workshops dealing with the organisation and design of the communal gardens. Besides the Saturday workshops, presentations were also given about the details of the architect’s plans. The residents formed working groups to determine how to recruit residents, manage the gardens and give shape to the association contracts.

During workshops residents could give their view on the urban plan. © atelier GROENBLAUW, Marlies van der Linden

In view of the sustainability ambitions of the residents and architects, the Public Works Department of the Municipality of Rotterdam was contacted at an early stage in the planning process. This made it possible to realise a bioswale, a rainwater pond and above-ground precipitation drains and to recycle much of the paving materials remaining after demolition. The Public Works Department assisted with the details of the sustainability plan throughout the remainder of the process.

Once the urban and architectural designs were completed and the outlines of the garden design were ready, the residents sat down with an ecological landscape gardener to design the plan for the vegetation and helped put that plan into practice. Now that the homes are occupied, the residents also do most of the management. They are occasionally assisted by the landscape gardener.

The extraordinary concept, comprising communal gardens, small private gardens without fences or hedges separating them, communal storage areas, above-ground precipitation drains and buffers, was only made possible by involving the residents, the Public Works Department and the housing association in the entire decision-making process. Joint trips were organised to successful projects such as EVA-Lanxmeer to eliminate any doubt about the quality of the concept.

Two quality requirements were realised in the gardens of this project. Play areas with large sandpits and water pumps were positioned close to the ground-level homes of primarily families with children. A rainwater pond was placed in a quieter part, in the angle where the apartment blocks meet. A bowling green was installed alongside the square.

Besides the individual homes there is a community house, with the central square in front of it. Residents have built dry stone walls along the paths, using leftover material from the demolition. A bioswale with vegetation was created between the community house and the buildings on Horsweg road.

The project has been in use since 2009 and is very successful. Adopting a highly integrated approach from the start of the project made it possible to realise a socially and ecologically sustainable project without added cost.

In addition to the elimination of rainwater from the drain system, the ecological garden designs and the ecological management, an EPC of 0.6 has been achieved. The project also incorporated sustainable materials such as sand-lime bricks, modified wood, partial flax wool insulation and ecological paint. The homes are ventilated using natural means and are extremely well insulated.