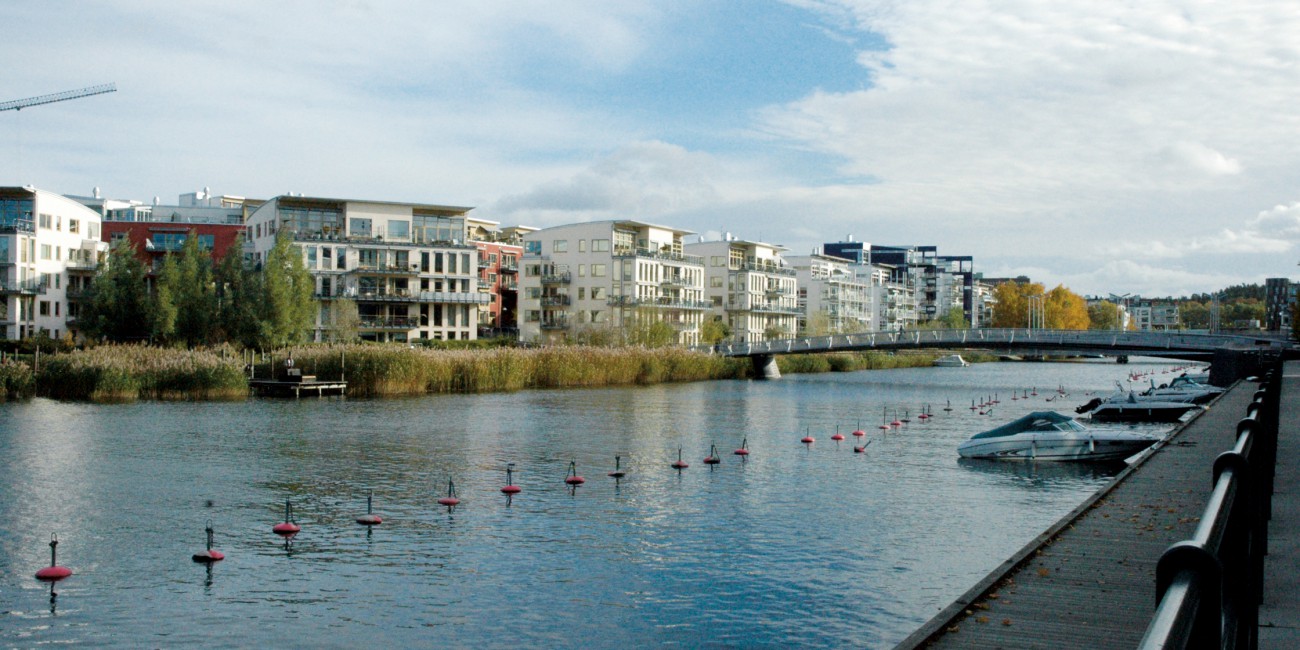 Hammarby enjoys an excellent location between the rich metropolitan life in the capital and the nature on the periphery of the city.

By 2016, when the second and final phase of the building activities is completed, it will be home to 25,000 people and offer work to another 10,000 people. The attractive mix of apartments, shops, offices and small traders with a focus on culture and entertainment gives Hammarby Sjöstad an inner city atmosphere. 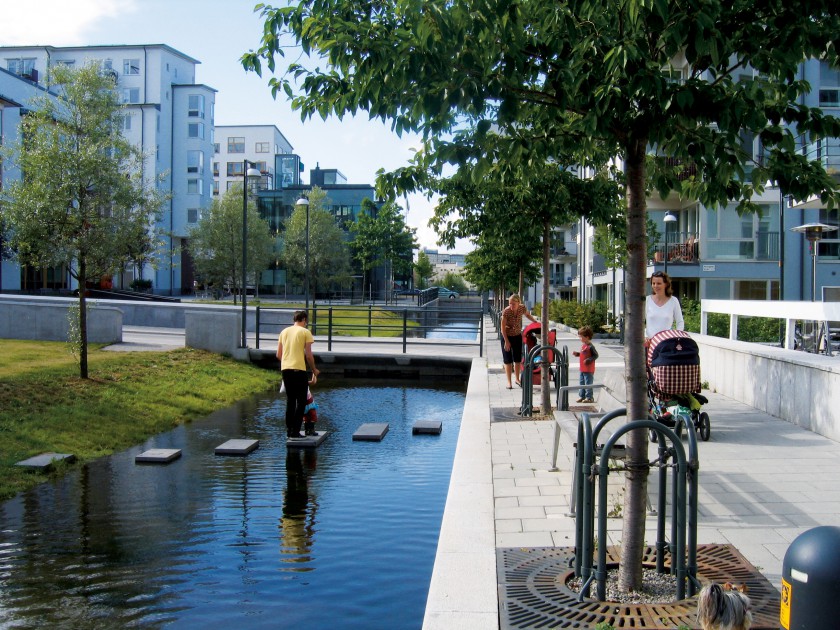 Sustainability was one of the primary areas of focus in the design of this new water-related district. The high sustainability ambitions were integrated into the planning process from the first phases. Sustainable alternatives for managing water, energy and waste were carefully studied at the level of the architecture and infrastructure. For example, all the electricity used comes from renewable sources. New types of fuel cells, solar cells and solar panels are being tested in the area.

The district is the product of a positive collaborative process between municipal authorities, urban planners, developers, architects, landscape architects, engineers at eco-tech businesses, energy company Fortum and the Stockholm Water Company. Traditional forms of urban planning take their inspiration from Stockholm’s 19th century city centre, combined with varied modern architecture. Buildings are oriented toward the sea and the canals, to allow as many houses as possible to profit from the water-rich views. Based on the strategy of a compact green town, a favourable balance has been found between construction and public spaces. The absence of fences and the presence of public spaces with footpaths yield a district with various different atmospheres. The district’s density, which is comparable to that of Stockholm’s city centre, gives it a trendy atmosphere and offers a high quality of life. 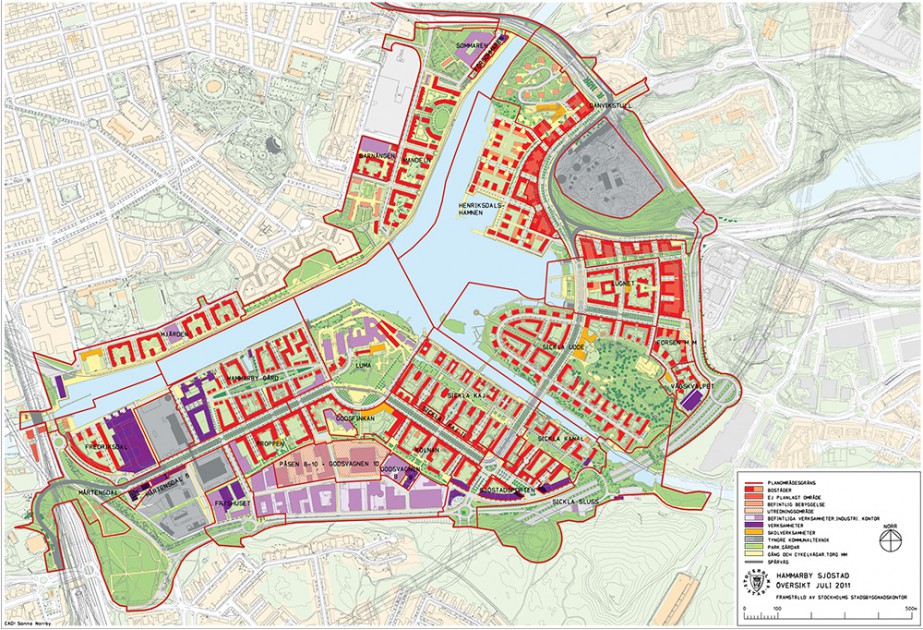 The energy supplies in Hammarby Sjöstad

The main source of heating in Hammarby Sjöstad, a town within the municipality of Stockholm, is district heating. Thirty-four percent of this heat comes from purified waste water, 47% from combustible household waste and 16% from bio fuel (2002 figures).  When the heat has been extracted from the warm, purified waste water, the remaining cold water can be used for district cooling. This is used in e.g. the cold storage in grocery stores, and also for office buildings as a replacement for energy-guzzling air conditioning systems.

Hammarby Sjöstad is experimenting with different solutions for its energy supply. For example, two buildings with solar cells can be found on the street called Sickla Kanalgata. The solar cells supply part of the electricity needs of the building’s public areas.  One large residential building has been fitted with solar panels. These supply the residents with 50% of the hot tap water they annually use.  Another interesting development project is the fuel cell which has been placed in GlashusEtt, the area’s Environmental Information Centre. The fuel cell could be described as a battery which, instead of being charged, runs on fuel (e.g. hydrogen gas). The fuel cell generates electricity and heat.  Approximately 900 flats in Hammarby Sjöstad now have biogas cookers. The biogas comes from the residents themselves. It is formed when sludge from the waste water treatment is digested. Amazingly, the amount of biogas “produced” by the average family is close to that which they use for cooking. By replacing electric cookers with ones that run on biogas, the electricity consumption has been lowered by 20% in the buildings in question.

The town’s current environmental goals, listed below, refer to the annual sum of all energy purchased to heat and operate its public buildings. Household electricity is not included. 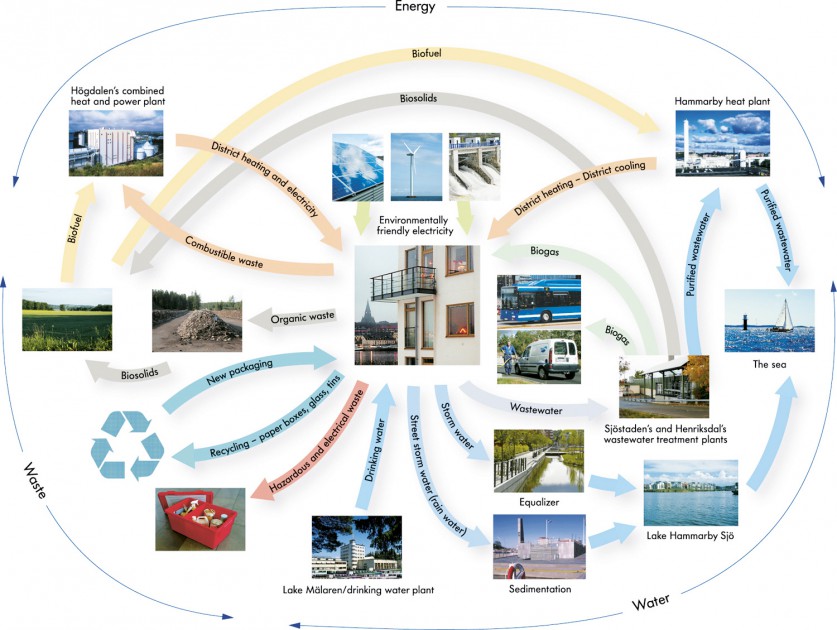 The first step in the sustainable water management is a proper participation and education model for the district’s residents. Proper education and use of water-saving appliances will reduce the amount of drinking water consumed by 50%. Water consumption levels of 200 litres per person per day are normal in Stockholm. As such, the focus of the education and participation strategy is on reducing pollutants in wastewater by 50%, by raising residents’ awareness of the impact of detergents and other household activities.

The residents of Hammarby have the option of monitoring their energy and water consumption via the internet to increase their awareness of their habits. 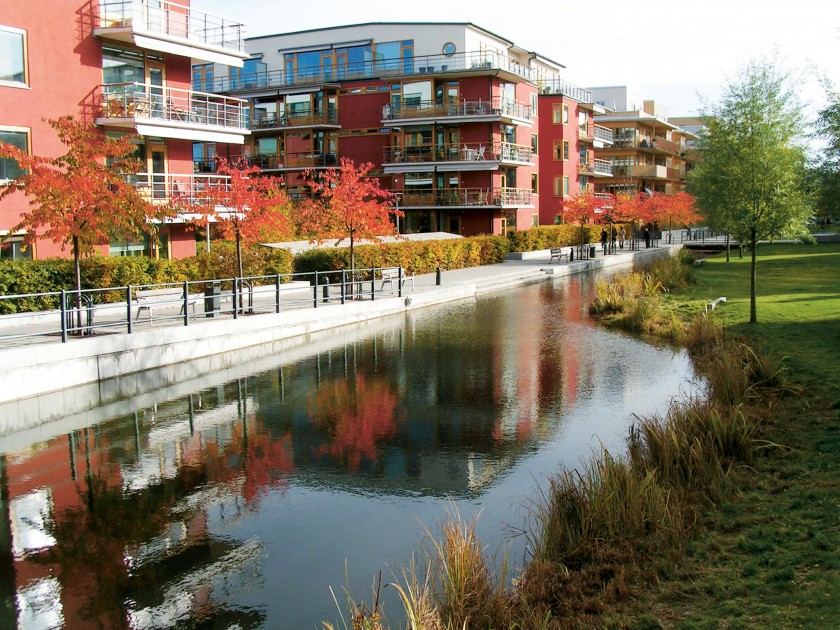 An environmental centre called GlashusEtt has been realised in the district to provide locals with information and education about all aspects of sustainable urban planning and to encourage the residents to adopt a more sustainable lifestyle. [GlashusEtt, 2007]

Wastewater is treated locally. The sludge produced by the treatment process is recycled and used for fertilising farmland and forestry land. The waste releases biogas during processing. That biogas is used as fuel for vehicles such as buses, taxis and waste collection trucks, and to heat 1000 homes in the area.

Heat is extracted from the treated water in the treatment plant, which is then used for district heating. With a spread in temperatures ranging between 10°C and 20°C over the whole year, the wastewater is highly suitable for both heat and cold extraction. In summer the cold water can be used for cooling.

Rainwater infiltrates the ground directly or is drained off through canals. The many small canals are part of the design of the urban landscape. Some of the roofs have been designed as green roofs that buffer much of the rainwater.

Runoff from roads is captured separately and drained off to treatment pools before being allowed to infiltrate the ground.

The Hammarby model shows that wastewater can be used in multiple different ways and that rainwater can be returned to the natural cycle. Hammarby has become an example of sustainable urban planning. For example, it inspired Toronto’s Waterfront (Canada), London’s New Wembley and many cities in China and Thailand. [World Clean Energy Awards, 2007; P-A Malmqvist, 2006]