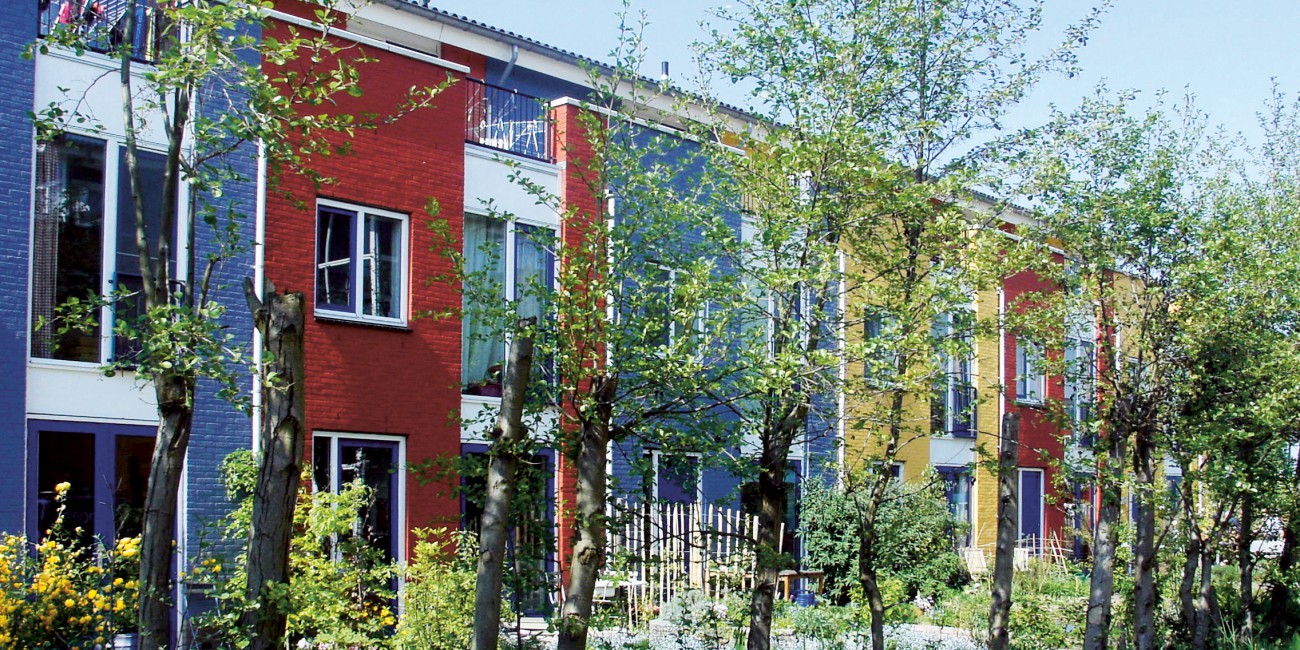 In Culemborg, a district with around 250 homes and small businesses has been realised with an extraordinary degree of integration. The sustainability in all respects and the unusual participation process in the realisation of the district and management are exceptional elements.

Besides retaining rainwater and treating greywater at decentralised locations, the plan incorporated an ecologically designed outdoor space, use of sustainable materials and low energy consumption. The future residents were allowed to participate in the planning process and influence how the district took shape. A residents’ association was formed, which is largely responsible for managing the outdoor space. All residents are members of the association.

The energy consumption levels per home are exceptionally low. The houses are fitted with solar collectors and are heated using a district heating system that extracts heat from the groundwater. The residents’ association set up an energy company, under the name of Thermo Bello, for this purpose.

The design of the water system is an important foundation for the urban planning design of the residential district and the associated business locations. The district was designed around a water extraction site. The flow of clean water (rainwater runoff from roofs) is led off to the water extraction site, where it is captured in retention pools and rinse water (see below for more specifics) is added. The flow of dirty water (street water, greywater and blackwater) is led away from the vulnerable water extraction area.

Clean precipitation running off from roofs is captured in four retention pools, via a closed system of pipes. The precipitation retention pools are topped up with rinse water from the pumping installation of the Vitens water company. That rinse water is released regularly when the filters used for filtering drinking water are flushed out. The rinse water, which contains manganese and iron, is nevertheless highly suitable for topping up the retention pools in dry spells and for guaranteeing that the water in the ponds keeps flowing. This ensures that both in summer and in winter the pools retain the requisite quality for fish and for plants growing on the banks.

The retention pools drain into a large infiltration pool, built in the original historical bed where the Rhine used to flow in this place. Most of the district is built on the banks of the riverbed called the ‘Schoonrewoerdse stroomrug’. The infiltration pools drain into a watercourse on the edge of the area covered by the plan. The dimensions of this drainage have been calculated to ensure that the volume of water running off is the same as the original runoff from the area when it was still used for agriculture.

Street water is treated as it runs along wide gutters and parking spaces with scoria semi-paving. Some of the street water is also allowed to infiltrate from there. Because the ground is clay, and groundwater levels are sometimes high, not all the street water can infiltrate. The surplus is fed into the large infiltration pool.

The greywater (wastewater from dishwashers, showers and kitchens) is treated in helophyte filters at three locations along the periphery of the area covered by the plan. After treatment, this nutrient-rich water is drained off into the adjacent watercourse.

A separate sewer system has been realised for blackwater, which comes from toilets. The plan is to build a biogas plant to process the blackwater, together with green and garden waste and pruned branches and use it to produce energy.

The district uses the unusual concept of common ownership on a large scale. Common ownership means that most of the outdoor spaces are owned communally by the residents’ association instead of being divided into private gardens. The commonly owned areas were designed and organised with input from the residents, and maintenance is also shared. It gives the district an exceptionally open, safe and child-friendly appearance. 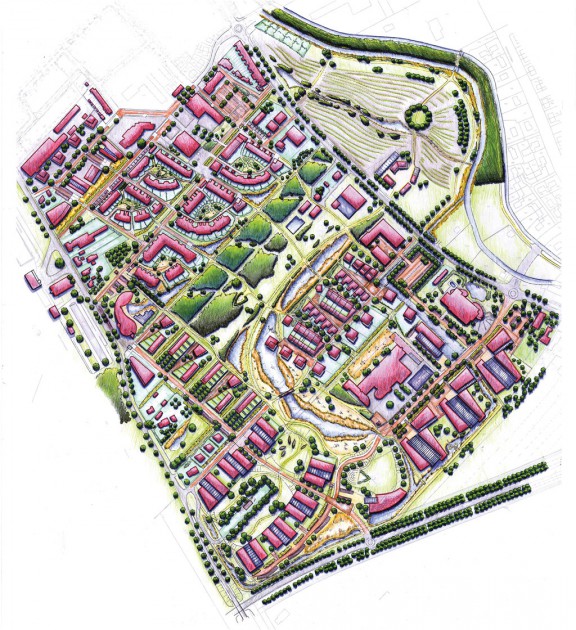 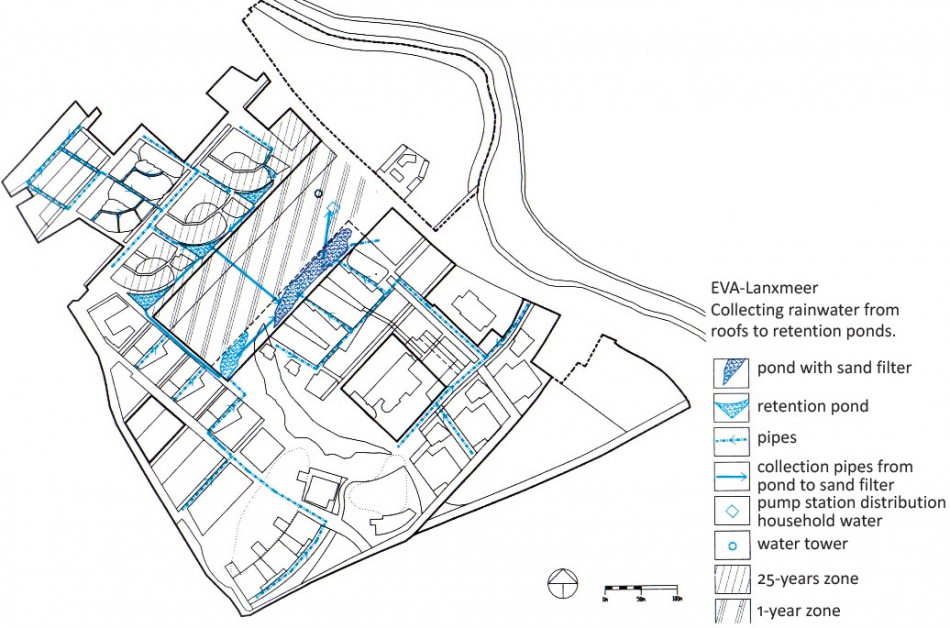 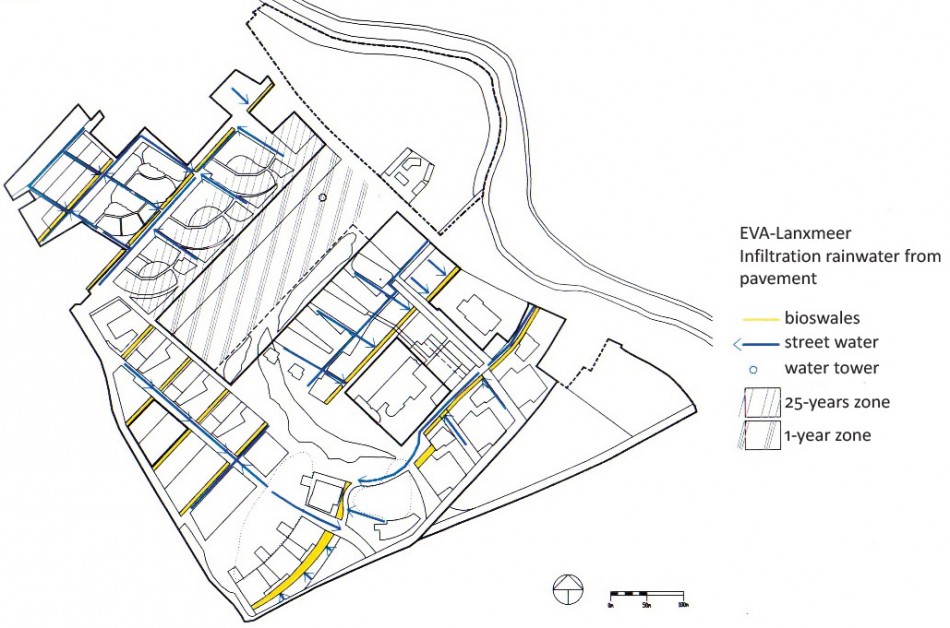 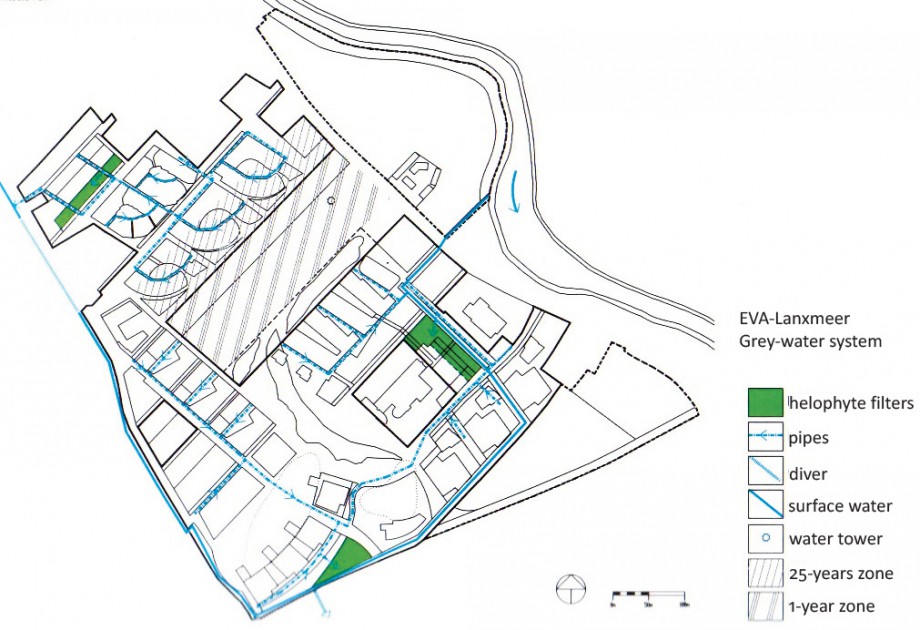