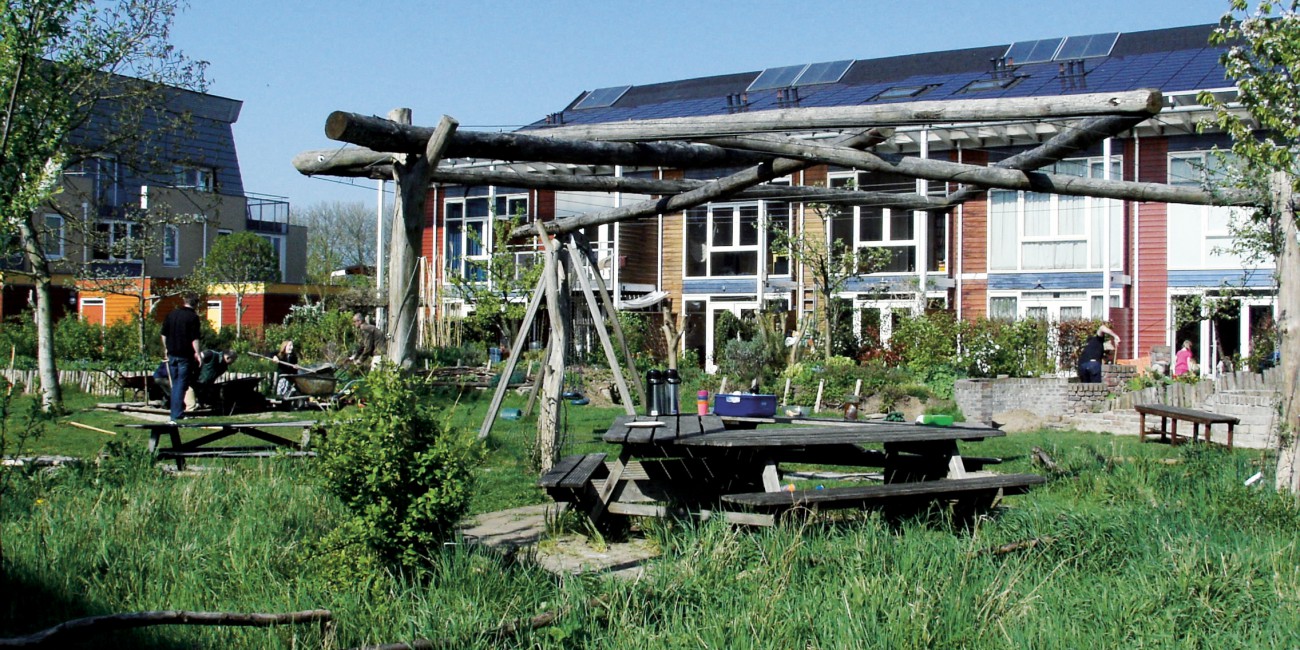 The EVA-Lanxmeer project in Culemborg began as a private initiative in the early 1990s. The goal was to develop a sustainable and environmentally-aware society. Since that beginning, EVA-Lanxmeer has grown into a national and international example of sustainable urban planning that also focuses on social and societal developments.

EVA-Lanxmeer is a co-production of the Municipality of Culemborg and Stichting E.V.A. (Ecologisch Centrum voor Educatie, Voorlichting en Advies, or ‘Ecological Centre for Education, Information and Advice’). The design and development of the urban plans were based on the following principles:

EVA-Lanxmeer surrounds a water extraction area with a handsome old water tower. In the protected water extraction area, a green zone is formed by ancient tall apple trees and poplars. Old landscape features and ecological qualities were incorporated into the urban design. The district includes sustainable water and energy systems. One of the principles was that the quality of the built-up environment should contribute as much as possible to the wellbeing of the people living and working there. The built-up environment is an important teacher and plays an important role in how children are raised and how they mature. As such, participation by future residents and users was part of the interdisciplinary planning process from the start.

The ambitions were very high, comprehensive, and innovative in terms of technology and resident input. In addition, the residential phase (residents’ conduct) was an integral part of the concept and EVA-Lanxmeer is a model project for gathering and sharing information.

The project was an initiative of Marleen Kaptein. Early in the 1990s, she developed the basic idea for the planning concept. She was part of a broad network and sought out partnerships with designers, architects and scientists. A foundation was later set up with an impressive managing board and recommendations committee. That foundation helped Marleen Kaptein to monitor the quality of the project, while being a continual source of inspiration.

The feasibility study was never officially completed but more or less went over into the actual plan development. The initial scepticism was eliminated when the concept and process became increasingly clear through the input of experts and because the plan received additional support from various outside sources. The decision-making process was accelerated when calculations showed that the still rough schedule of requirements was having a favourable impact on the land exploitation budget. A great deal of effort was put into generating support, and meetings were conducted with authorities involved directly and indirectly.

Another and completely different feature of this phase of the process was the continual interaction between programme (tracks), input from residents and the translation into urban design concepts. An iterative process emerged, in which the job was to match theory to practice.

The ambitions defined in the schedule of requirements and the general philosophy behind the project were assessed per project by a specially formed project group. That municipal project included an external project leader, the municipal urban planning expert, the municipal clerk, the external urban planning supervisor and the external landscape architect. The project group compared each project with the EVA principles up to the moment that the planning application was submitted. Only then could the land be handed over. The project group had made arrangements about the relevant criteria with both municipal assessment departments and the buildings aesthetics committee.

This project structure ensured that the EVA principles could be upheld without the regular building plan assessment process becoming a delaying factor in the development planning.

In its search for possibilities for financing the wide range of ambitions, the municipal authorities made the unique decision to prefinance the development costs of the home designs (up to and including the specifications). As a large group of prospective residents had already signed up, the risk for the municipality was minor. Once the deeds of purchase had been signed, the construction phase risk was assumed by the contractor. The actual building of the homes took place in four phases. Five steps can be distinguished in the consultation process about the first phase:

Input from residents on ideas, designs, decisions and eventually management is a concept that runs through the entire planning process. After the moment that Culemborg could be studied as a serious possibility for a location (feasibility study), the number of interested residents increased quite rapidly, in part because the planning concept had drawn the attention of the professional and regular press from the start. In the summer of 1997, a design team set about, in a series of workshops, designing a schedule of requirements for the urban design phase and translating those requirements into a plan. The results of the workshops and the residents’ workbook were used as the basic information.

An important insight was that a balance needed to be found between a continual focus on the ambitions and the hard reality of construction. Finding that balance was the essence of the organisation. The EVA foundation played a decisive role in upholding the idealistic basics of the concept.

PARTICULAR PROCESS CHARACTERISTICS ARE AS FOLLOWS:

The organisation was characterised by the following:

The following success factors were distilled from the process: