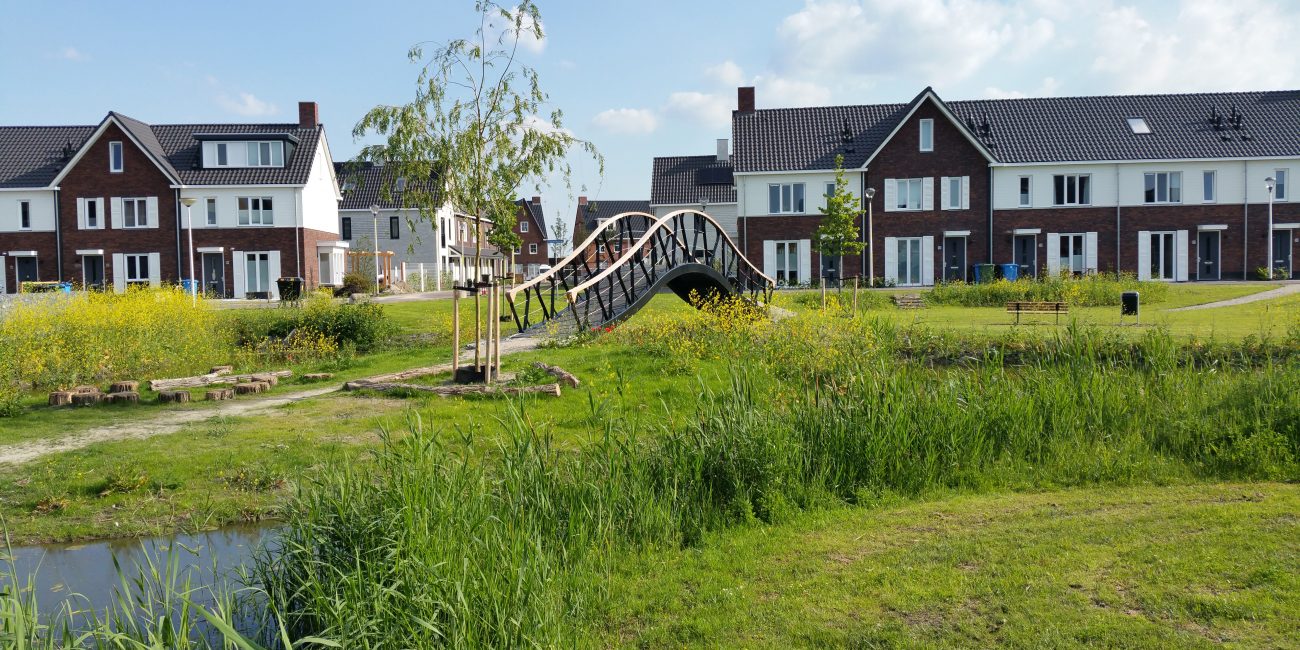 The new Dutch neighbourhood ‘Boszoom’ (‘Forest Edge’) is part of the larger new development ‘Keijzershof’ at the southern edge of the municipality of Pijnacker-Nootdorp, located along highway N470 and the metro line between Rotterdam and The Hague.

The neighbourhood’s defining feature is its green-blue heart running like a thread through its centre. This gives the new neighbourhood a green character and makes it an attractive place to live. Branches of this ‘green thread’ extend into other parts of the neighbourhood, along which residential areas have been created.

Boszoom’s central ‘green thread’ is a child-friendly green zone comprised of water and greenery with a natural, organic design. It is designed to simultaneously serve as a natural, collective play area, a walking route, a meeting place and a calm environment. It invites residents to play and explore. The green thread also forms an ecological connection with the surrounding environment. The area is car-free.

Boszoom has a variety of neighbourhoods, each with its own distinct character. Bordering the outer ring are a dozen or so such neighbourhoods, with single-family homes built around courtyards with parking.

Boszoom’s larger homes, such as the semi-detached homes and detached villas, are directly adjacent to the central ‘green thread’ area. Here the lots are more spacious, with green front gardens and on-site parking. These homes are surrounded by quiet public greenery or situated on avenues.

Boszoom’s architectural style is traditional yet contemporary. It includes the use of natural materials, such as wood, baked stone and thatched roofs. In addition, the homes are energy efficient.

Car traffic is routed around the new, low-traffic development by means of a ring road. Roads pierce the neighbourhood only where necessary. These lead to the parking lots in the residential areas and – via narrow, zig-zagging streets – to the homes directly along the green thread.

Cars are parked outside the neighbourhood, along the main ring road and in the neighbourhood’s car parks. In this way, cars are hidden from view as much as possible, flora and fauna are given space, and children can play safely on the streets. Where possible, the parking spaces are semi-paved.

Nearly every neighbourhood has a ‘wadi’, a green catchment area. Rainwater from roads collects in the nearest wadi, from where it flows to a central gully in the ‘green thread’ area.