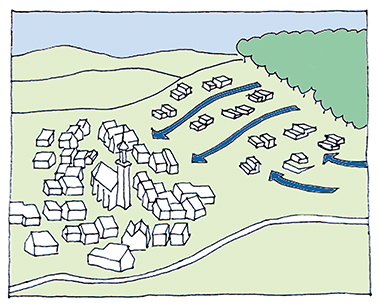 A grid of parks and small areas of vegetation that are connected to one another not only affects the microclimate and the residential buildings adjacent to the green areas, but in periods of heat stress will offer more pleasant places for city dwellers to be and a pleasant network for slow-moving traffic.

Green grids in a town or city that are connected with the cooler countryside make it possible for air to move. The vegetation in these green grids should not be planted too close together, to make it possible for the wind to pass through them. In towns and cities situated in valleys, it is important to create corridors to allow cool air to flow in from green hills at night. [Ministerium für Klimaschutz NRW, 2011]

The concept of a lobe city was developed early in the 20th century. In the 1990s, Tjallingii studied the idea in relation to sustainability. His research showed that the lobe plan is suitable as the basis for sustainable urban development and for blue-green urban planning.

The green-blue lobes have a favourable impact on the urban climate: in the summer they hold less heat and so offer cooler areas. The difference in pressure between the hot and cool areas also causes airflow and ventilation. [Hermy, 2005]

Lobe cities offer the possibility of combining the benefits of compactness with those of more open and green development. The growth potential of these cities is limited. For large urban conglomerates, green grids are a more viable solution. [Ministerium für Klimaschutz NRW, 2011]