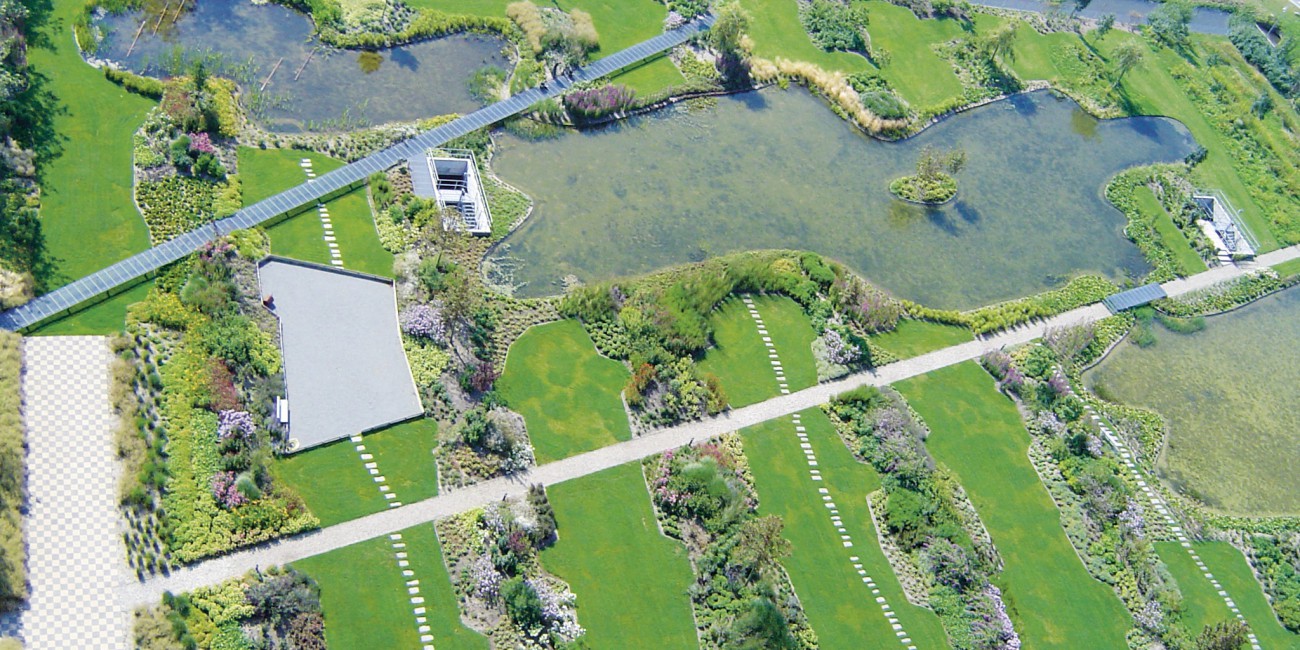 Roof of the European Patent Office in Rijswijk, The netherlands © Copijn

Green roofs do not attract the same amount of heat as bitumen or EPDM roofs. Green roofs are increasingly used as a building block towards attaining sustainable urban development. Green roofs have many advantages. Besides being attractive, their capacity for rainwater retention, their capture of particulate matter, and the roof and the surroundings heating up less are often a consideration in favour of constructing green roofs. Green roofs also contribute to a larger biodiversity in the city.

Green roofs can be installed on roofs with slopes ranging from 1o to 35o.  At more than 35o extra provisions are required to prevent sliding. Steeper roofs dry out faster due to the faster runoff of rainwater. If the additional provisions to counter sliding tear through the waterproofing roof membrane this will increase the risk of leaks. For rainwater retention, a slope of up to 7o is most efficient.

In order to make green roofs walkable or to create a standing spot, a paved surface must be installed.

There is good quality literature available on the various producers, with main details, implementation guidelines and technical data. Standard packages are also available for the various purposes such as rainwater retention, biodiversity and/or a garden roof. Green roofs have been further developed by the various suppliers and are on offer as a total kit including planning, advice, construction, maintenance and all applicable guarantees. Several providers have developed software with which the influence of a green roof on the water system can be determined.

In the Netherlands, flat roofs are generally calculated to be able to carry a load of 1 kN/m2 for the gravel layer. In existing situations the gravel layer can almost always be replaced by an extensive green roof without extra reinforcement measures. A saturated green roof with a thickness of around 7 cm will remain under the permitted carrying capacity. It is necessary to review case by case whether extra reinforcement construction is required when installing thicker green roofs or for intensive green roofs in existing and in new housing developments.

Green roofs contribute to the increased absorbency capacity of a city. The effect of retention is largest with small to average rain showers. With stronger and prolonged rain showers the contribution to the retention capacity of a basic green roof is minor, as it is then already quite saturated. In order to store rainwater in more substantial quantities, a retention roof can be applied to new buildings or to an existing building if its roof can bear the weight.

Through the heating of paved surfaces such as roads and buildings, the temperature in cities is on average 3oC to 10oC higher than the surrounding countryside. Green roofs contribute to lowering the urban warming and improving the microclimate. The surface temperature of green roofs on a sunny day in summertime is around 27oC, while a bitumen roof heats up to around 70oC.

Through evaporation a green roof cools the direct environment, and the spaces below the roof heat up less. This means less cooling is required for the buildings. Green roofs have a higher albedo than black or tiled roofs. Through evaporation the surface temperature remains lower than the white painted roofs which are currently praised. A city with more green roofs will remain cooler than a city with white roofs. [Weiler, 2009]

Green roofs can act as an important stepping stone for all kinds of plants and animals in the more and more built-up city landscape.

From a doctoral research conducted at Tübingen University it appears that the choice of plants for green roofs is the main determining factor for the presence of animals. For this research over 120 types of roof vegetation were researched.

Simple extensive vegetation is usually only temporarily inhabited by flying species and must be reinhabited each year.

Soil-dwelling species such as earthworms can only survive for prolonged periods of time if there are thicker layers of substrate or partial substrate hills present, essential to their survival in periods of frost. The largest selection of species will be found inhabiting a varied, multi-structured vegetation. Extensive growth in combination with several substrate hills and a vegetation of sedum/herbs/scrub with a structural element, such as a small pond, deadwood or gravel patch is considered to be of highest ecological value [Mann, 1998].

The US Environmental Protection Agency (EPA) states that one green roof can capture 1 kg of particulate matter per m2, capturing it in the soil and in the vegetation. A green roof also captures CO2 from the air and produces oxygen, as all plants do. Green roofs also filter other environmentally harmful elements such as NOx [EPA, Green roofs, 2008].

Due to the lower air temperature the solar panels will continue to work better on green roofs. The conductivity of materials for electricity is higher at lower temperatures. The combination of solar panels and a green roof has a positive effect on the biodiversity, as the alternation of sun and shade creates various microclimates.

Through its mass and absorptive capacity a green roof has a positive effect on noise-polluted environments such as near airplane flight paths. The noise levels in the spaces just under the green roof as well as the direct environment are reduced. Green roofs reduce reverberation by absorbing sound by approximately 3 dB and are able to increase the soundproofing quality by approximately 8 dB [Gemeente Rotterdam, 2006].

Green roofs have a positive effect on the quality of life in a city, but are also enrichment to the urban landscape with its visible, walkable natural areas.

Green roofs which have been installed properly have a substantially longer life span than conventional bituminous or EPDM roofs. Due to the smaller temperature fluctuations in a green roof these are less subject to wear and tear due to the elements, and the green layer protects the roof from mechanical damage and UV-radiation.