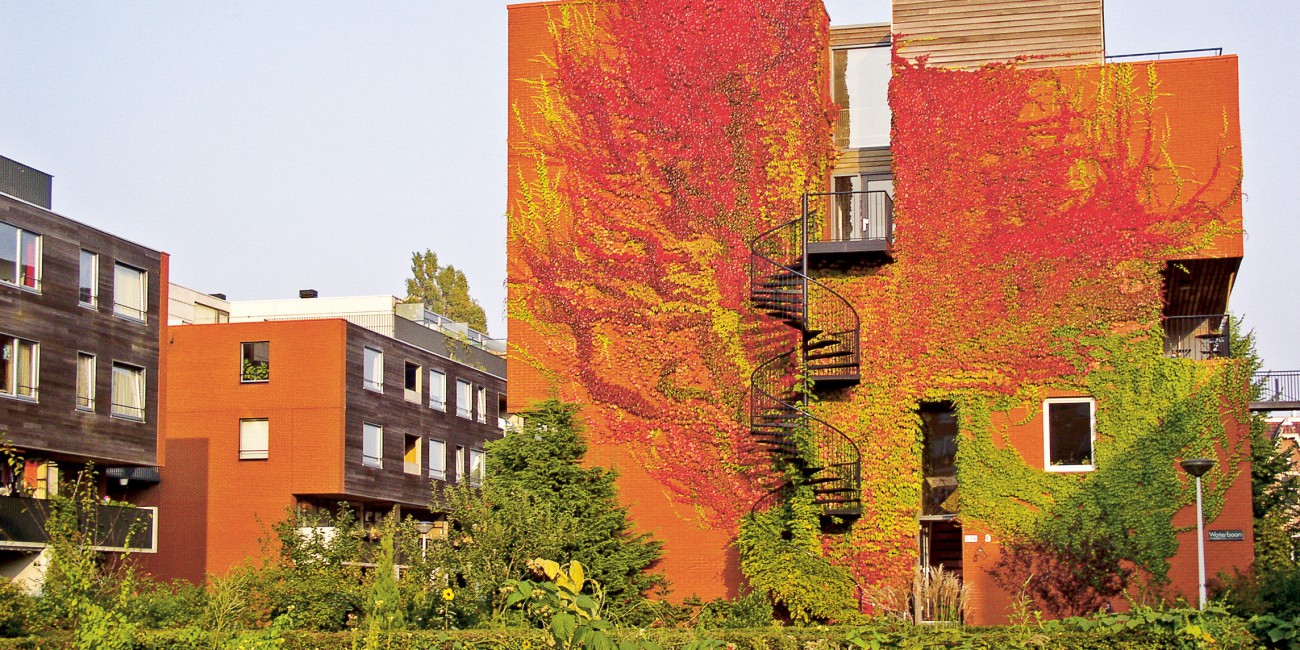 Green facades attract and lose less heat. The plants also cause evaporation, which helps keep the town or city’s climate cooler. Vertical vegetation is currently of interest. For centuries certain climbing plants such as wisteria and virginia creeper have been used to adorn building facades. In Germany the greening of walls is called Architektentrost, as many failed designs have been hidden from sight using vertical vegetation. Recently in the larger cities this vegetation is used for many more purposes, such as capturing fine
particulate matter and contributing to the cooling of a city. The advantage is that it takes up little space in an already intensively used urban area, while providing many vertical metres of green. One should not forget that a climbing plant which can cover a five story building in the span of a few years requires sufficient space for its roots to remain healthy. The plant does not need much space on the ground, but some space is required underground.

Three types of vegetation can be discerned:

There is a lot of discussion surrounding the pros and cons of green facades. Now that their positive effects have become clear regarding their role in capturing fine particulate matter (although this is very relative, see the chapter on Air Quality) and lowering urban temperatures, the objections to green facades regarding moisture, damage to buildings and nuisance from pests is diminishing. [Hermy, 2005]

Evergreen plants can actually protect a building against heavy rain showers and keep the building walls dry. However, buildings which already are affected by rising humidity due to existing construction faults or damage can actually be further damaged by vegetation, as it inhibits the evaporation of moisture.

The question of damage to a building by roots of climbing plants is often raised. The same point is valid here: only if the facade already has loose mortar or cracks will it have a problem with plant roots. It is therefore important that a building is inspected for faults and have these repaired prior to planting any vegetation. With climbing plants the building will also need to be inspected annually; and all roots, tendrils, twining stems and other infringements must be removed from windows, gutters and eaves to prevent damage.

Certain facades, such as those with a lot of sheeting and mortar are less suitable for greening with vegetation.

Some people are afraid of having spiders and insects enter their homes via the vegetation on the facades. This can be reduced if the windows and other open parts are kept clear of vegetation. Birds are generally not seen as a nuisance. It is clear that the amount of fauna on a green facade is two to three times larger than on a regular facade, depending on the age and type of vegetation used [Hermy, 2005].

Vertical vegetation protects the walls from direct solar radiation. The facade heats up less, absorbs less heat and emits less heat at night. The plants also emit water vapour through evaporation, which also enhances the cooling effect in the surrounding area. In short, vertical vegetation has a tempering effect on the maximum temperatures.  For shade, climbing plants can also be used for pergolas.

Plants can capture fine particulate matter and aerosols from the air such as the heavy metals lead and cadmium. Particulate matter generally precipitates on the leaves, is washed away by rain and ends up in the soil. Another part of this matter is absorbed by the plant and stored. The uptake appears to be larger near major roads, where more pollution is present. The uptake also depends on the leaf area index (the relation between the leaf surface area and the space occupied by the leaves on the facade) and the type of plant.

Fixating particle matter is also important with relation to the time between maintenance done on the facade; plastered facades in Germany which are normally painted every five years now only need painting once every eleven years [Hermy, 2005] (see chapter 8: Air Quality).

Plants use CO2 from the air for photosynthesis and produce oxygen which they emit to the air. Nitrogen and ozone are absorbed from the air.

By planting a varied selection of plants, it will look attractive and the capacity to absorb pollution is increased. Various species of plants absorb different kinds of pollution in varying amounts from the air. The effect of vegetation on air quality in highly polluted parts of a city is minor (see chapter on Air Quality).

Besides improved air quality in the vicinity of green areas and a cooling effect, green in an urban area has many positive effects on health, recovery and the ability to manage stress. Vertical green has the advantage that even where buildings are close together and there is little opportunity for horizontal green, vertical green can always be realised.

Vertical green protects a building against the heat of the sun in the summer, keeping it cooler. In the winter the vegetation can protect the building from wind and reduce heat loss via convection along the facade and the air pocket between the vegetation and the building. A stationary air pocket of 5 cm between vegetation and a building is comparable to a heat transfer coefficient of 2.9 W/m2K and thus can be compared to isolation of heat using insulated glazing. Thicker layers of air do not improve the insulation significantly, as convection loss due to the stack effect increases. This could be fixed by compartmentalising the vertical growth using for instance the supporting structure.

The stack effect, the upward airflow between facade and vegetation, can actually be a desired effect in summertime. A choice can be made between

evergreens or deciduous depending on the desired effect. Deciduous vegetation keeps out sunshine in summer, but lets it in winter. [Krusche et al., 1982]

Green facades mute street noise from 2.5 dB to 3dB and ensure that internal reverberation between facades on each side of the street is reduced [Wong, 2010].

Four types of facade vegetation can be discerned:

Self-adhesive species do not require climbing assistance. They have suction pads or clinging roots which grow away from light. In this case it is important that there be no cracks in the facade or openings between the bricks, and that ventilation outlets and other outlets are kept free of vegetation in order to prevent damage.

Ivy is the most well-known self-adhesive vegetation type.

Twiners are the largest category of climbing plants. The stems wind upwards and around tree trunks, wires and any other aides in search of light; they always require support if they are to be used as vertical vegetation. An example of a twiner is wisteria.

Support climbers come equipped with thorns and hooks which the plant uses to grow upwards.  Winter jasmine and climbing rose use this climbing method.

Species that require climbing support can be used in combination with self-adhesive species and use these as their climbing support. Climbers naturally occur in forests, thickets and forest edges, as these are sheltered environments. It is therefore advisable to provide some protective covering to the base of the plant in the form of some other plants. [Hermy, 2005]

Criteria for choosing species and types

In order to be able to make a successful and low-maintenance choice of climbing plants, certain conditions must be kept in mind. In order to have as little maintenance as possible it would be opportune to choose a plant with a natural growing height which is equal to the desired growth height on the facade.

Self-bonders with a growing height up to 30 m:

Self-bonders with a growing height from 8 up to 25 m:

Self-bonders and climbers with a climbing construction and growing height from 5 up to 15 m:

Small climbers with a growing height up to 5 m:

A plant that is placed outside in the Western-European climate should be winter hardy.

Plants require high standards in the application of supporting climbing constructions. The requirements relate to the direction of the structure, the mesh size, the profile cross-section, the wall distance and the distance from the ground level [Hermy, 2005].

Plants in pots must be able to withstand greater extremes. Frost and freeze drying in winter but also drought in summer and excess water in wet periods.

The choice of vegetation also depends on the direction of the facade and thus must be selected carefully. Depending on the desired effect, a self-climbing evergreen which is able to climb on its own and is adapted to shade would be a good choice for a north facing facade. For a south-facing facade a deciduous species which requires a climbing structure could be useful, as it can also act as a sunshade. For a south-facing façade, fruit carrying vegetation such as grapevines can also be considered.

Vertical gardens are a recent development. They are offered by various producers. They consist of prefabricated facade elements which are placed in front of a facade and are not connected to the soil in the ground. They are modular facade elements filled with a substrate. They always come equipped with an irrigation/runoff system, usually operating automatically; if preferred, remote. Humidity sensors ensure the necessary irrigation/runoff and plant food with the automatic systems.

A sub-construction must be placed on the facade on which the modular elements can be attached. These elements can also be constructed as an outer cavity wall. The extra stress this would result in depends on the system, approx. 80 kg/m2. The drawback of a vertical garden is that it requires more maintenance, irrigation and a care system. This is substantially more expensive than a conventional green facade using climbing plants. The advantage is that the system does not need ground soil and is therefore suitable for any situation. If well-designed and cared for, the facade will green faster and in a more uniform way. The environmental effects such as the capture of fine particulate matter and tempering of heat stress are comparable to those of ground-based facade vegetation types.