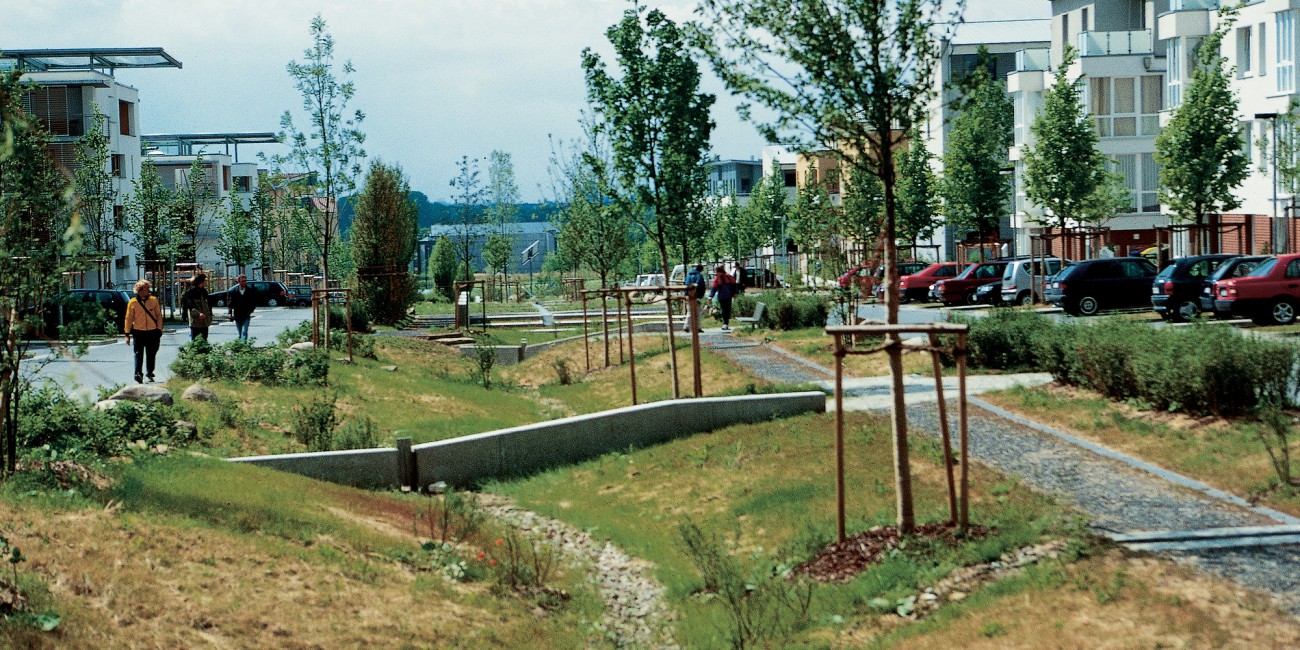 Systems for infiltration, buffering and drainage

In bioswale systems, the water running off from roofs and roads does not flow into the sewers but instead is led into the bioswale via above-ground gutters and/or ditches. Bioswales can be incorporated into the green infrastructure and can help enhance biodiversity and quality of life.

A bioswale is a ditch with vegetation and a porous bottom. The top layer consists of enhanced soil with plants. Below that layer is a layer of gravel, scoria or baked clay pellets packed in geotextile. These materials have large empty spaces, allowing the rainwater to drain off. The layer is packed in geotextile to prevent the layer from becoming clogged by sludge or roots. An infiltration pipe/drainpipe is situated below the second layer. To prevent the bioswale from overflowing its banks during heavy rainfall, overflows are added that are connected directly to the infiltration pipe/drainpipe. Rainfall infiltrates into the ground via the ditch and the packed layer. If the water rises above the level of the overflow, the water runs through it to the drainpipe. The bioswale’s dimensions should be sufficient to ensure that this occurs no more than once every two years. If the drain and the overflow both fill up, the bioswale acts as an above-ground drainage system and leads the water directly to surface water. 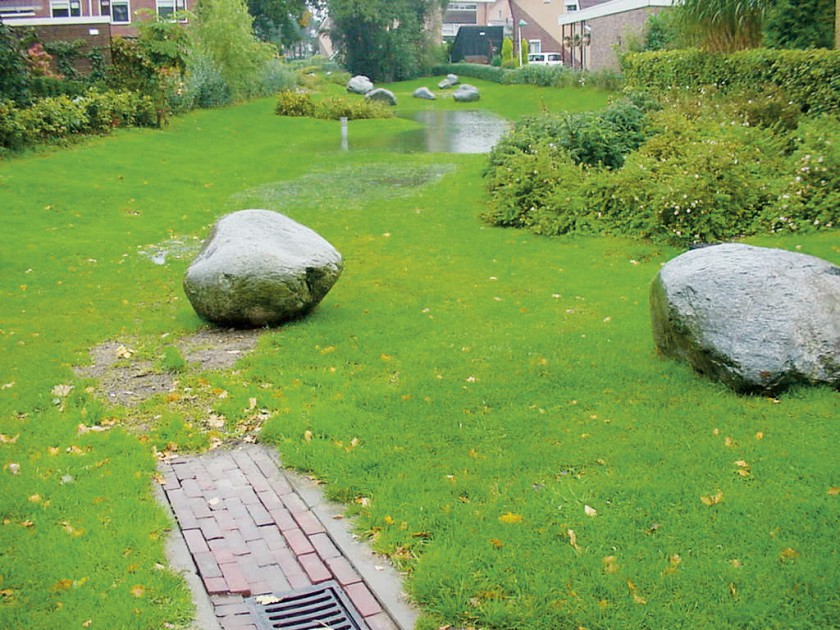 The dimensions of most bioswales are designed in such a way that water from heavy rainfalls infiltrates into the ground within 24 hours. In most cases, the bioswale will only serve as an above-ground drainage system once every 25 years. This means that bioswale systems must always be connected to surface water. The drainage system also serves to transport water from areas of ground with a low infiltration capacity to areas with a more favourable infiltration capacity.

In the winter, when water levels are high, the infiltration pipe/drainpipe also serves as a drainage system. To utilise the drainage function and to regulate groundwater levels, pumping/inspection drains can be installed in the bioswale, from which the water can be drained off.

Bioswale systems are suitable for areas with porous types of ground and relatively low groundwater levels. As a rule, bioswale systems are more suited for the eastern part of the Netherlands, higher sandy soil and along riverbeds. The permeability and structure of the ground differ greatly from one location to the next, and even in different parts of individual locations. The structure of the ground and the groundwater levels must be determined before a bioswale system can be chosen for draining rainwater.

Section scheme of a bioswale when it is dry © [image by atelier GROENBLAUW, Marlies van der Linden (based on: Boogaard et al, 2006) 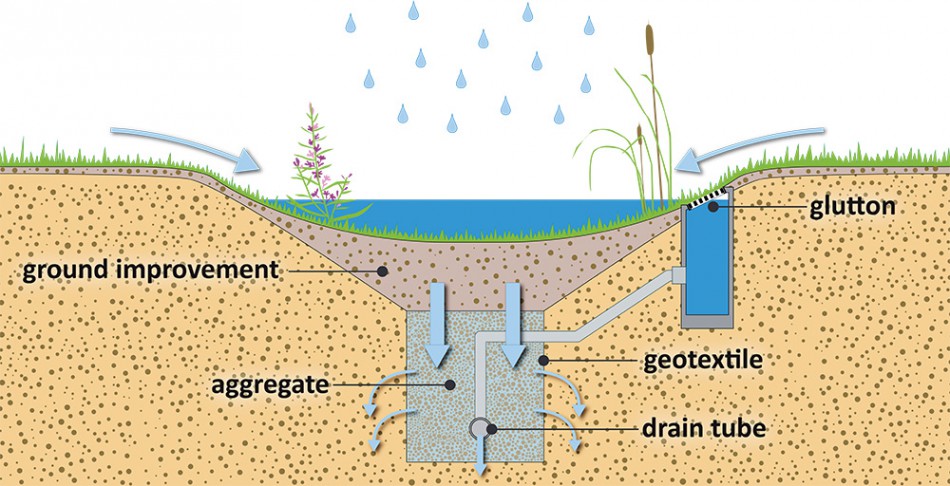 Almost every bioswale system created requires above-ground drainage, as most parts of the Netherlands are relatively level and groundwater levels are relatively high. Underground drainage systems for precipitation are situated too low to connect properly to bioswale systems.
The highest possible groundwater level at which a bioswale system can be introduced is -1.5 metres, and preferably even -2 metres (see cross-section).
Roads that carry more than 1000 vehicles per 24 hours must always have a connection to the sewer system.
The area required to build a bioswale system is approximately 16% of the total area of a new district. This percentage includes the use of gentle nature-friendly banks. Past experience in Enschede shows that the banks of a bioswale should be no steeper than 1:3 to allow mowing. 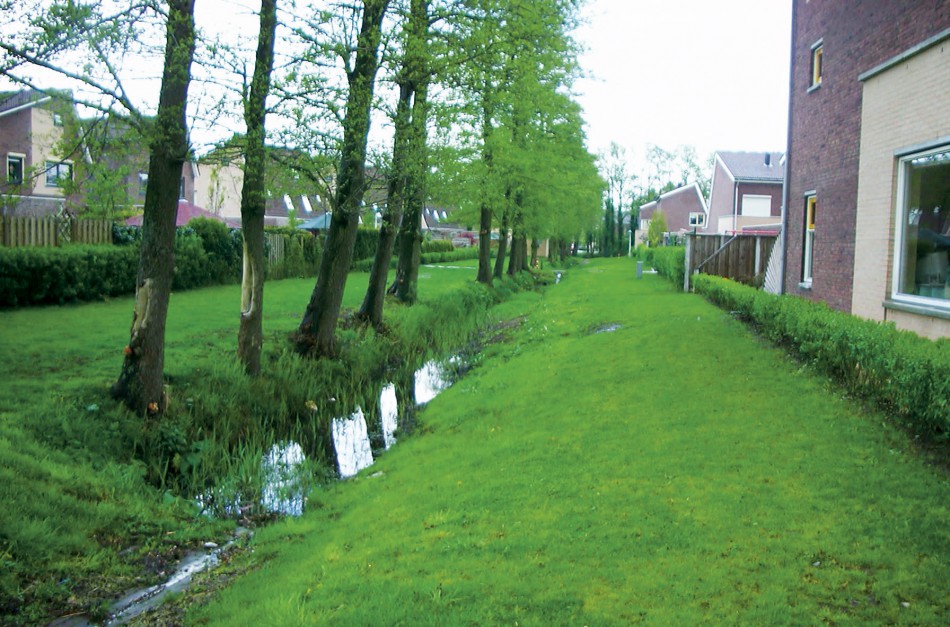 Planting more specifically suited vegetation in bioswales can allow bioswales to play a greater part in enhancing the town or city’s biodiversity and affords them a more diverse and pleasing appearance.

More naturally designed bioswales can play a part as ecological connection zones in districts and in towns and cities. What is particularly important is that the vegetation rise high enough to shelter and camouflage the movements of small mammals, amphibians and insects such as butterflies and grasshoppers. Deliberately designed and linked green-blue veins running through the town or city are of great importance to the town or city’s biodiversity and quality of life.

Unlike what is now common practice, more use could be made in bioswales of plants that are suited to fluctuating water levels as occur naturally in stream valleys and along banks. The most common choice now is for strong grass mixtures that can survive being walked on and extended dry spells. These grass mixtures are less capable of surviving extended wet spells. More varied vegetation, with grass for playing on and with higher plants for the diversity of flora and fauna, will add to the aesthetic appeal of bioswales. Bioswales can then fulfil more functions than water management alone. More diverse vegetation also improves the root systems in the ground, which will then remain more permeable in the long term. However, the increased plant volume will reduce storage capacity by 1% (a negligible amount).

Bioswales are an excellent instrument for improving urban water systems. A properly designed bioswale system buffers rainwater and allows it to infiltrate; this minimises overflow, improves the quality of surface water and prevents the ground from drying out. In periods of groundwater flooding, bioswales can serve as drainage systems.

Districts with bioswale systems have green-blue veins running through them that can help reduce heat stress. That effect can be enhanced by planting carefully selected vegetation along the bioswales.

Water surfaces and areas of vegetation have a small positive impact on air quality, in particular by binding particulate matter.

If bioswale systems are used in residential environments, the residents must be informed beforehand and be kept informed. The assessment of the bioswale system in Enschede showed that proper education about the system leads to a high level of acceptance and greater awareness of how cleaning products and other environmental pollutants are used. Citizens need to be involved in the planning and construction of bioswale systems in new development projects and restructuring situations. The bioswale system itself should preferably be realised in a public area. Some of the inflow gutters leading the water from the above-ground precipitation drains to the bioswale run across privately owned land. The design, the connections from private to public land and the upkeep of private land need to be agreed upon with the residents. Past experiences with the bioswale system in Enschede’s Oikos district, part of which has been realised on privately owned land, are less positive. Management by private individuals and on privately owned land is vulnerable.

In most cases, residents regard vegetation and water as positive elements. The same is true of bioswale systems. Bioswales with more diverse vegetation are perceived as even more positive. Bioswales that vary grass with more diverse vegetation can be perceived as flowery veins running through the district. However, bioswales require proper maintenance: otherwise they can quickly become polluted by litter and dog faeces. It is advisable to delineate special dog-walking areas.

In Enschede, to prevent the bioswales from becoming clogged or polluted, leaf waste and litter are removed and the overflow drains pumped clean twice yearly, and the drainage system is hosed clean once per year.

Road salting policies needs to take the bioswale system into account. In most cases this will not present any problems since most main roads are connected to the sewer system. 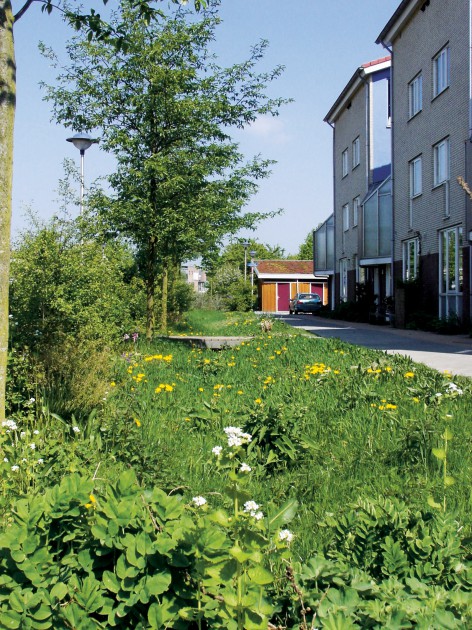 It should be noted that the costs of maintaining bioswales in part are costs for maintenance and management of green that are also to be made on a conventional sewage system. When applying nature-friendly bioswales, the costs are reduced because of a lower mowing frequency (2x instead of 26 times per year).