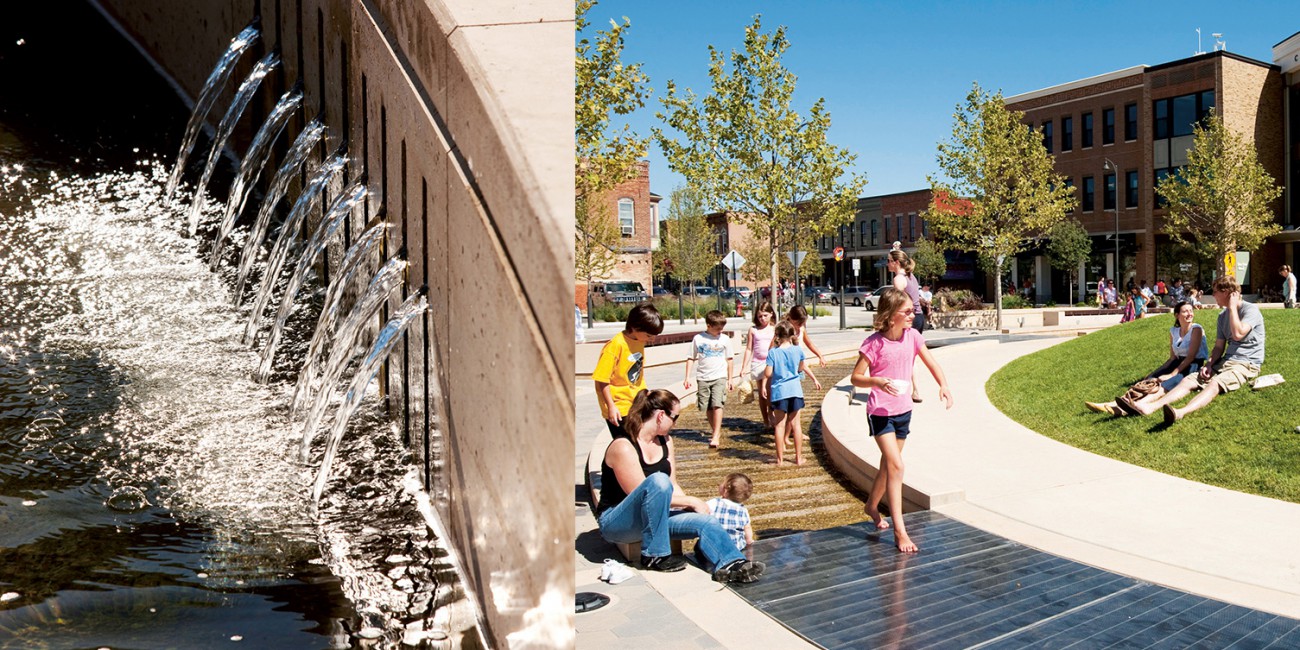 One of the most effective ways to reduce people’s heat stress is to bring them into contact with water. Contrary to popular belief, however, water only cools when it evaporates from the skin or when in the form of a cool, moist breeze. Surface water, whether stagnant or flowing, has only a minimal cooling effect.

Surface water in the form of ponds, canals and rivers has been shown to create a maximum temperature reduction of 1°C. Water’s cooling effect is much greater if it is atomised, because droplets provide a far greater surface area for evaporation. Fountains or misting installations can lower air temperatures by an average of 0.7 to 3°C. However, this effect is extremely local, and as such, fountains do not contribute to cooling at the level of a city or a square Kluck et al, 2020 fountains only cool within a small area at their leeward side.

The cooling effect of urban surface water is often attributed to the process of evaporation. Yet evaporation from ponds, canals and ditches does not directly reduce local air temperatures. The energy required for evaporation is taken from the water rather than the air, so evaporation initially reduces only the water temperature, and even then only slightly. Whether this ultimately leads to a noticeable cooling of the air depends on the temperature difference between the water and the air, and on the surface area of the water Kluck et al, 2020.

Large surfaces of water in or near urban areas can have a noticeable effect on air temperatures ‒ up to 4 °C [Völker et al., 2013]. For example, on a hot day the cool waters of the IJmeer in the east of Amsterdam can cause temperatures to be several degrees cooler up to a few hundred meters inland Ronda et al., 2017.

Perceived temperatures near to urban surface water are determined primarily by the urban design around it. When canals and ponds are largely shaded by trees or other green structures, temperatures near the water often feel significantly lower than surrounding areas. The environment around surface water is an important determiner in creating cooler urban temperatures. Urban water must therefore be designed to have shade, green elements, fountains and ventilation Jacobs et al., 2020.

Water naturally provides cooling when people can play or swim in it. With the increased frequency and intensity of heatwaves, more space needs to be dedicated to water recreation.

Fountains and misting installations cool the air and skin by means of evaporation.

Atomised water is especially effective in cooling when combined with a fan, because wind accelerates the heat exchange between the wet skin and the environment. Mist has the advantage that it is visible, so that people can seek cooling in the mist. Kluck et al, 2020

HOW EFFECTIVE IS IT TO WETTEN STREETS?

Wettening a street can keep it cooler for several hours, but for a long-term effect the street must regularly be kept wet. Periods of excessive heat, however, are often paired with a shortage of water, so wetting streets may not be the most appropriate option Kluck et al, 2020.