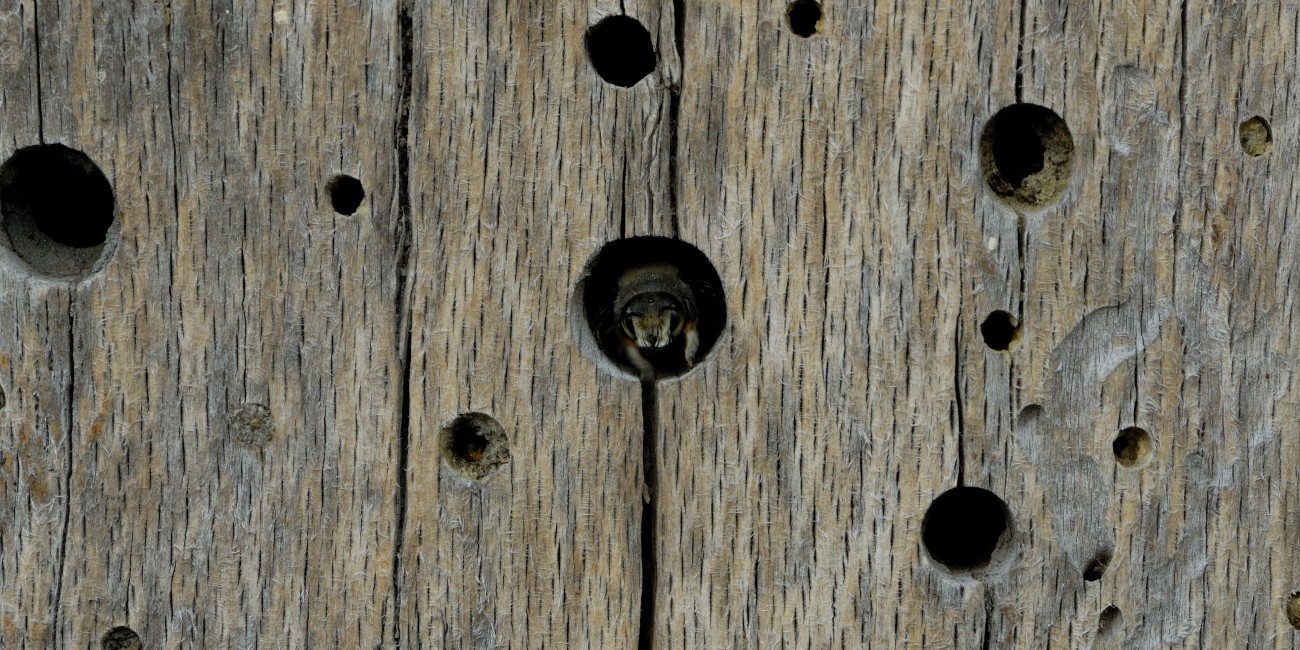 There is more biodiversity in a city than most people expect.

Biodiversity is the degree of variation of life forms in an ecosystem [Wikipedia, 2011]. The Earth’s biodiversity was developed over the course of millions of years. Human interventions have had a dramatic impact upon the world’s ecological heritage. In past 200 years, more species have gone extinct than in previous the 65 million years. This process threatens the capacity of our ecosystem to provide us with oxygen, water and good quality soil. [TCPA, 2004]

The functions of an ecosystem are called ecosystem services. Examples of ecosystem services are the provision of food, firewood, medicines and drinking water, but also purification of air and water, pollination of crops, holding soil together, carbon storage and temperature regulation. Ecosystems are important for recreation and provide identity to a place, a ‘home’ feeling, or on the other hand pleasant stimuli, like when people visit nature areas. In addition, ecosystems distribute nutrients and seeds, for instance through dispersement by birds. [Beintema, 2011] 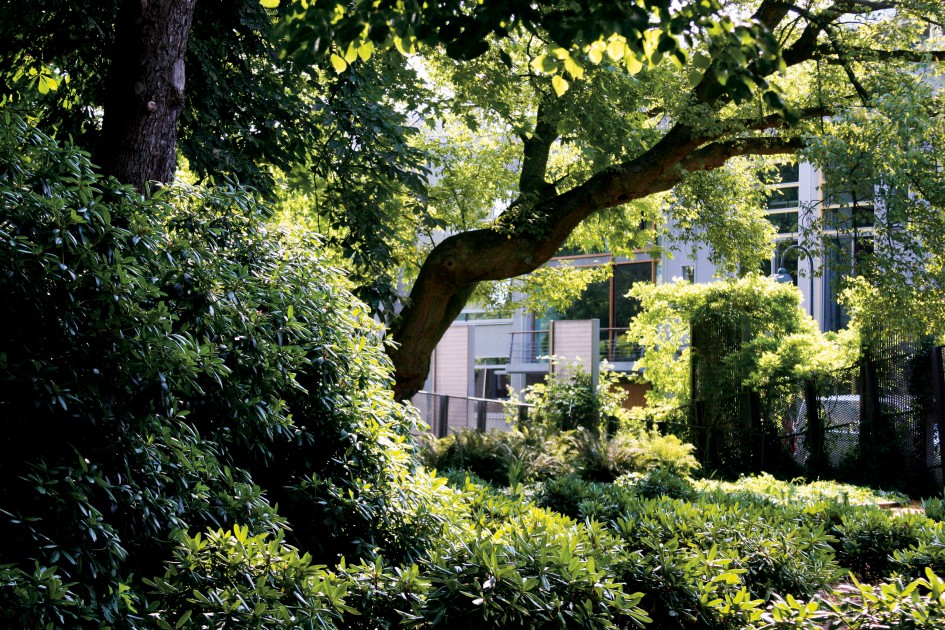 ‘In the Netherlands, the biodiversity has diminished to about 15% of the original situation. The loss of biodiversity is substantially higher than elsewhere in Europe and the world.

In the Netherlands, biodiversity dropped from about 40% in 1900 to about 15% in 2000. Biodiversity is expressed here in MSA: Mean Species Abundance. An MSA of 15% means that the populations of indigenous plant and animal species have an average size of 15% of the natural situation. So the MSA indicates how much of the original biodiversity is left over. The most important causes of the decline are change in land use, environmental pressure and fragmentation of ecosystems.

Homogenisation
Underlying the loss of biodiversity is a process of homogenisation (Lockwood & MacKinney, 2001). Many original species disappear, while a few other, opportunistic species strongly increase in numbers. Remarkably, the local diversity of species tends to increase initially as a result of the arrival of the opportunists. These often are the same species who feel at home in many different ecosystems. After some time, more and more characteristic species disappear. This way, ecosystems start to resemble each other gradually: homogenisation. The number of species per ecosystem remains more or less constant.’ [PBL, 2010] 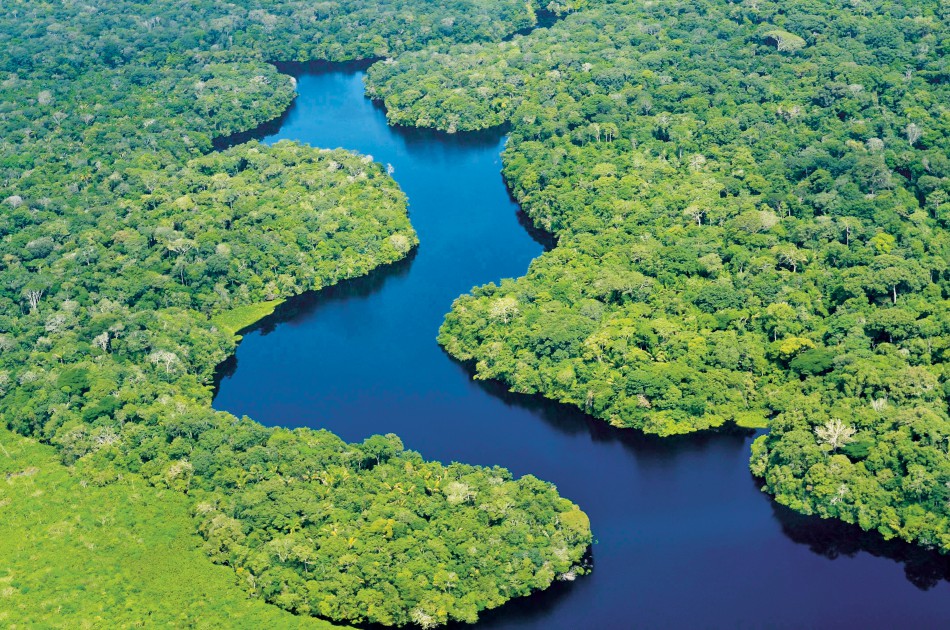 As opposed to the development in rural areas as described above, there is more nature and biodiversity in cities than most people expect. Nature in cities is not second rate nature as compared to nature in rural areas, contends zoologist Reichholf in his book ‘Stadtnatur’. To the contrary, urban nature is more diverse than cultivated rural areas and closer. Nowadays, cities have become islands of diversity, surrounded by a more monotonous agricultural landscape. This is a surprising concept for people who think that only nature outside cities is valuable and has a high degree of biodiversity. By now, more than half of all people live in cities; the same tendency appears to be true of flora and fauna.

At present, foxes, beavers and wild boar can be found in city parks and residential areas. What makes the city so attractive, and is there really more life in the city?

As it turns out, the structure of cities, with alternating high and low greens and rock formations in the form of buildings, creates a diversity of microclimates that facilitates a corresponding diversity of flora and fauna. In addition, the lower nutrition value of the soil in cities is more favourable to flora than the soil in agricultural areas. Fewer disruptions by hunters and fewer fast driving cars and the presence of leftover food are reasons why cities have developed into attractive living areas for fauna. The higher temperatures and the presence of more sheltered places also support more flora and fauna in cities. The strong reduction of species diversity in agricultural areas was caused by land consolidation and scale increases, which led to the disappearance of many hedges and trees and of less intensively used plots of land. A second blow to rural biodiversity in agricultural areas is the increased use of fertilisers and pesticides. [Reichholf, 2007] 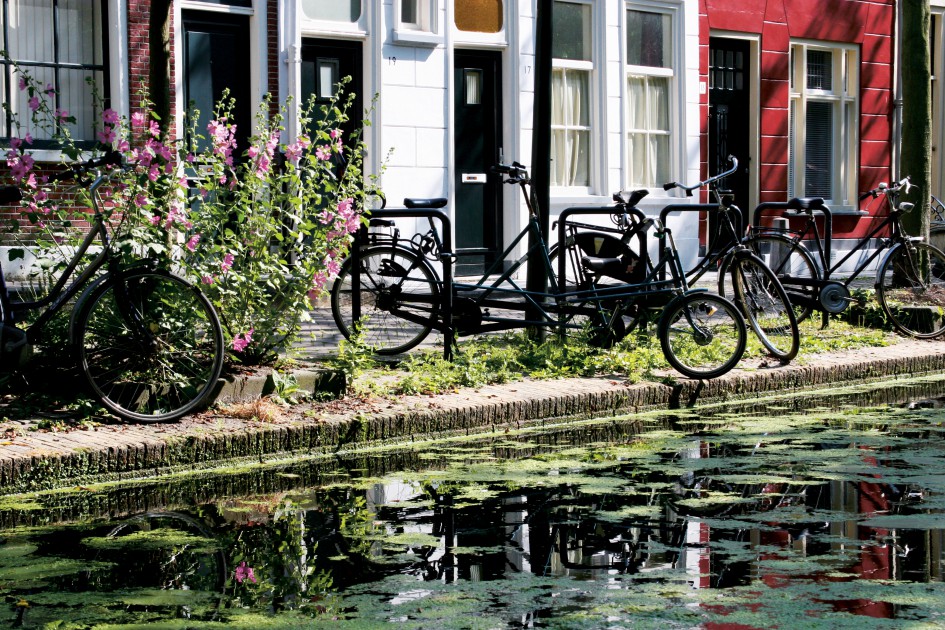 Counts indicate that in the past decades, the biodiversity has increased in cities and decreased in agricultural areas. 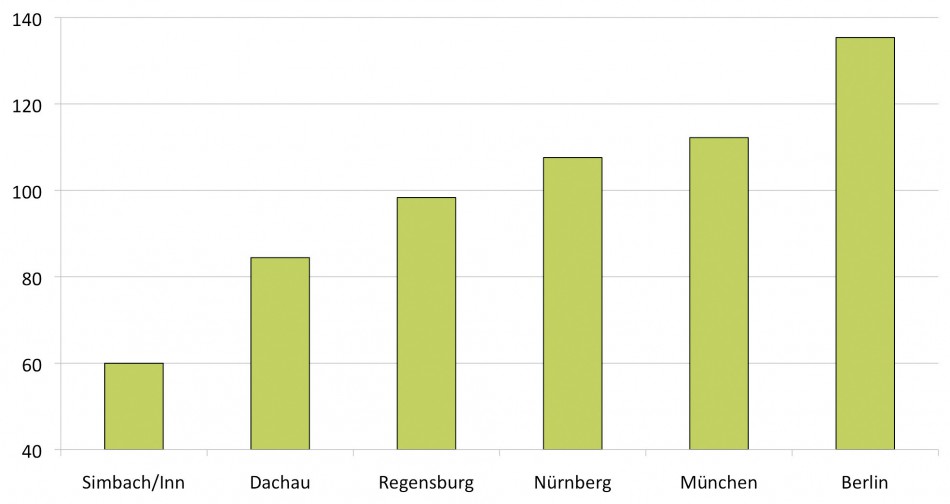 Number of bird species breeding in different cities in Germany. This shows, the larger the city, the more species there are. © Reichholf, 2007

In terms of number of species, large cities now compete with many nature areas. Of course it is true that certain very shy bird species and species that require specific breeding opportunities cannot live in cities. Survival of species in cities can also never be an excuse for reducing the size of nature areas or to allow the decline of the diversity of species in agricultural areas to go unmitigated.

Cities offer a wide variety of living areas; often they are located on rivers with flood plains, on the coast or on lakes. In cities there are buildings with varying density and height, there are short lawns, trees and tree groups, city parks, city forests, kitchen gardens, private gardens, ponds, ditches and other bodies of water and, not to forget, there always are abandoned areas in which nature can have its way. Sunny and shaded areas with different degrees of warming and humidity create very different micro-climates.

Structures that have disappeared from rural landscapes can be found in the city. And these structures facilitate biodiversity.

Diversity of species in the city and rural area © Reichholf, 2007

Average number of tree species depending on the land use © Reichholf, 2007

Average use of landscape types in urban and rural areas in Central Europe © Reichholf, 2007

The mosaic of different biotopes in cities functions in a way comparable to that of the island structure of an archipelago and thus provides gradation and diversity.

In addition to the mosaic structures, the lower use of pesticides helps in creating and maintaining more biodiversity. Bee-keepers know that bees have more sources of nutrition and are more productive in cities due to the larger supply of flowering plants, but also because the breeding season is extended because cities are warmer. The higher temperatures also benefit birds, butterflies and other animals. The slower car traffic in cities takes fewer animal victims and the absence of hunters makes cities safer for animals. Therefore, the landscape is less disturbing than was thought. On average, 50% of urban areas are impervious; in rural areas, a larger percentage is ‘developed’ with monocultures. The image of green, rural areas being more natural needs to be revised. [Reichholf, 2007]

Of course it is necessary to protect ‘accidentally’ developed biodiversity in cities and to intentionally create space for its development. Non-developed, green areas in cities are under heavy pressure; there is a policy of making cities more compact and private gardens are increasingly being paved. 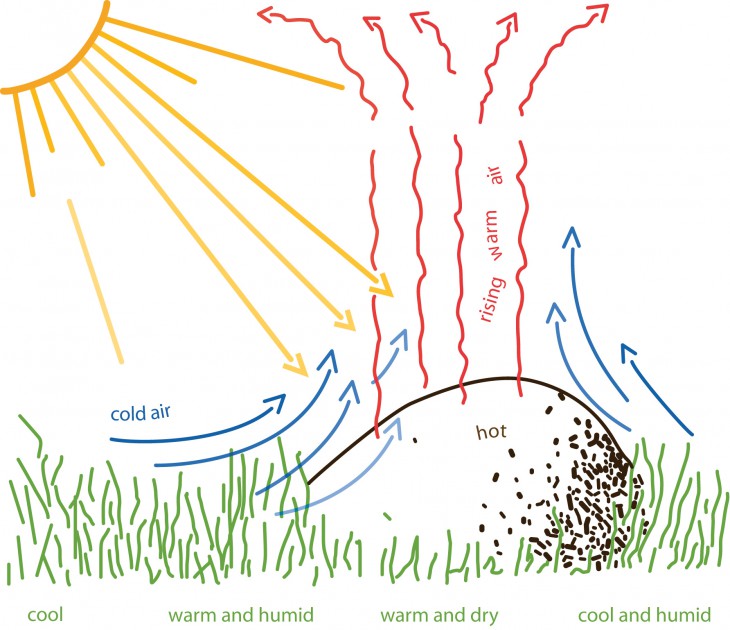 Buildings work as a stone in the landscape and create various microclimates. On the sunny side of the building it is warm and the backside is cool and moist; on the building it is hot. All those different places attract certain species. © Krusche et al., 1982

In addition to scale increases and land consolidation, the overuse of fertilizers on agricultural areas, which comprise 50% to 60% of the land area in Europe, has caused a strong decline of species diversity. This process is accelerated by the emission of nitrous oxides from road traffic and electricity production. As a consequence, also natural areas were over fertilized and grew full of nitrogen-loving species. In Germany, cities and large transport infrastructure only occupy 10% of the total area, so it has much less influence on the decline of biodiversity than the industrialisation of agriculture. To the contrary, cities show that a different way is possible. Less fertilizer is used in cities, and emissions from energy plants descend to ground level further away due to the high smokestacks. As a result, in cities one can still find nutrient-poor and shrubby grasslands, and vegetation can develop undisturbed in undeveloped plots. [Reichholf, 2007]

A remarkable cause of the increase of fauna in cities is that cities are in fact safer and calmer for many animals. Animals leave the countryside where they are hunted and where open, mono-functional landscapes offer little protection. Cities are attractive because of the higher availability of food in the form of waste, but also because animals are fed here. If people do not form a threat to animals that are known as wild, many animal species can live well in the presence of people. Their shyness diminishes over time. [Reichholf, 2007]

Twice as many foxes per m2 now live in Berlin as in German forests. The city of Berlin employs urban forest rangers to teach residents how to deal with the wild animals and also provides information online.

Endangered species per area in the Bayern area in Germany © Reichholf, 2007

In practice, plants which need a nutrient-poor, dry and warm biotope and which are among the most threatened species do well in cities. The image above indicates that the expectation and the reality of the number of threatened species diverge widely. The biotope with the largest area provides the largest share in the threat to species and the biotope with the smallest area the smallest share.

Disused old industrial areas, rail yards, etcetera harbour numerous plants and beetles, wild bees and other insects that are protected or on the red list. It is therefore important to protect and maintain such areas. Unused land is under increasing pressure due to the policy of infilling and compacting cities. 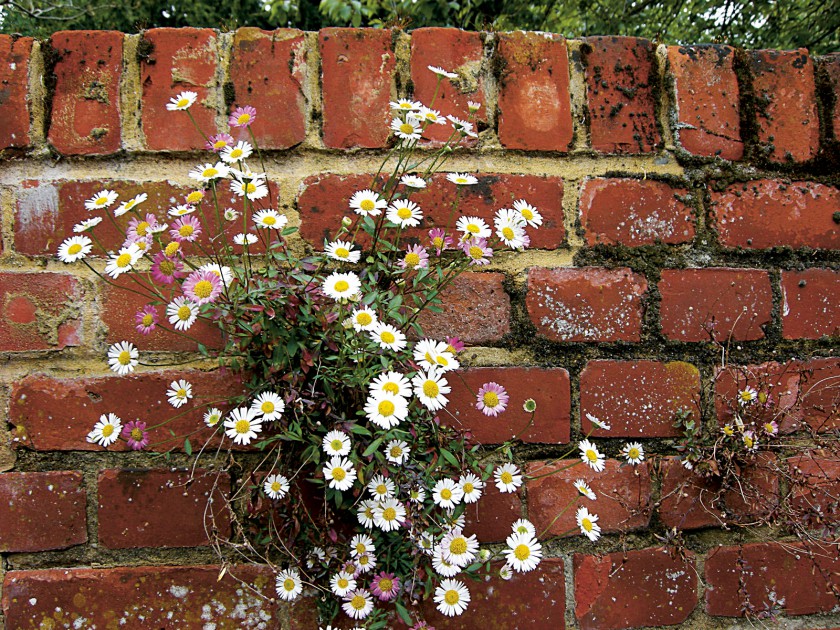 But the main reason for supporting natural diversity in cities and providing a place for more original, indigenous species is how they are experienced. How wonderful it is as a child to pick and taste wild forest strawberries or to see a beautiful butterfly or dragonfly.

More nature in a city improves its value. Homes near green or water have higher values than comparable homes without green nearby.

Green and well-beautified industrial areas are easier to rent out than meagre looking ones with only concrete and asphalt. For people with busy agendas, living and working near green areas is of essential value. It can contribute to relaxation and well-being. 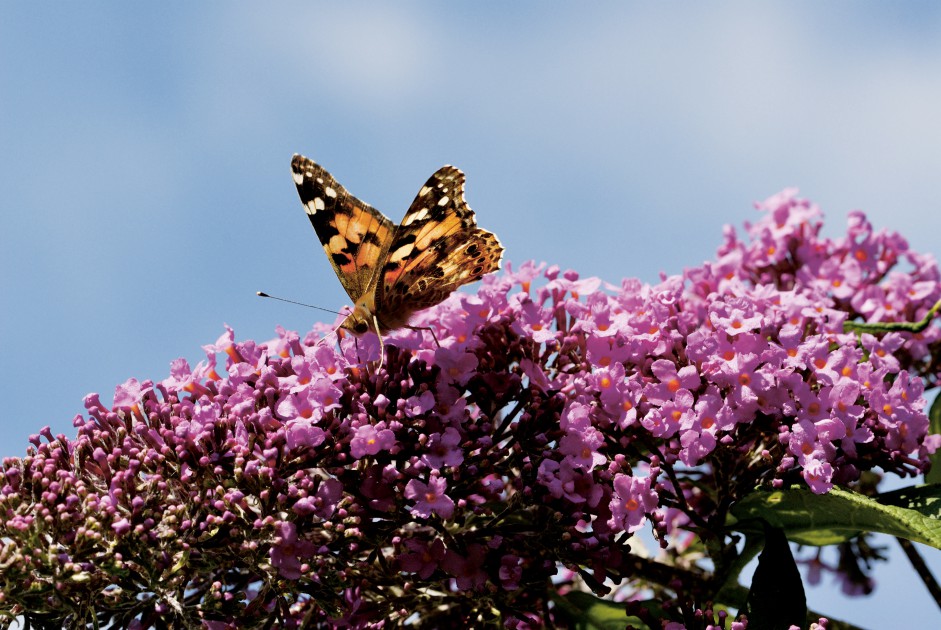 From compact to green cities

The current trend in urban development and city planning is filling in and developing compact cities. Policy could be nuanced by paying more attention to the importance of green in cities for recreation, biodiversity, urban climate and water management. This presents us with a dilemma: on the one hand, we want to build in as compact a manner as possible in order to spare rural areas, while on the other hand we want green inside our cities and we are now discovering how valuable and important urban green is.

The green and blue functions and associated ecosystem services also belong to the concept of the compact city. 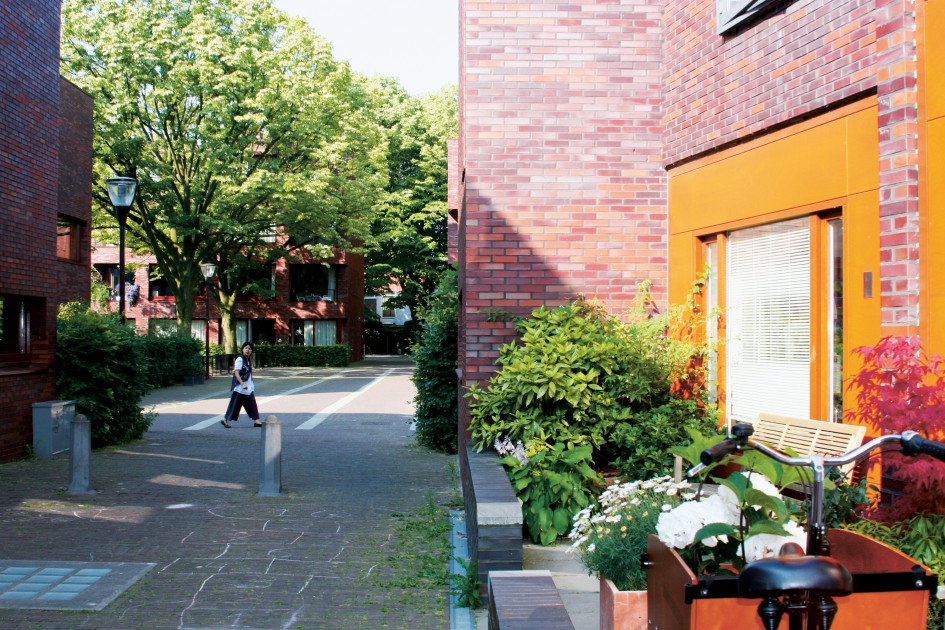 In any case, there are more possibilities for using space more efficiently. Roofs and facades can be greened. Even in highly urbanised areas it still is possible to create more unpaved area, more than happens now.

For instance, where ‘weeds’ are growing between sidewalk tiles, these tiles are hardly used, otherwise there would not be any weeds, and these tiles could be removed.

Removing green and unpaved areas makes additional water storage facilities outside the
city necessary. The absence or disappearance of recreational green areas within walking distance results in more and longer transport movements to the outlying areas. A green-blue infrastructure that connects the outlying areas with the city is advantageous for all aspects of green-blue urban development: for the ecological networks and hence for biodiversity, for water buffering, for the urban climate, for air quality, etcetera. It is possible to include other city-edge functions such as kitchen gardens, pea patches, private gardens, urban farms, sports fields and slow-traffic routes in the green-blue networks. 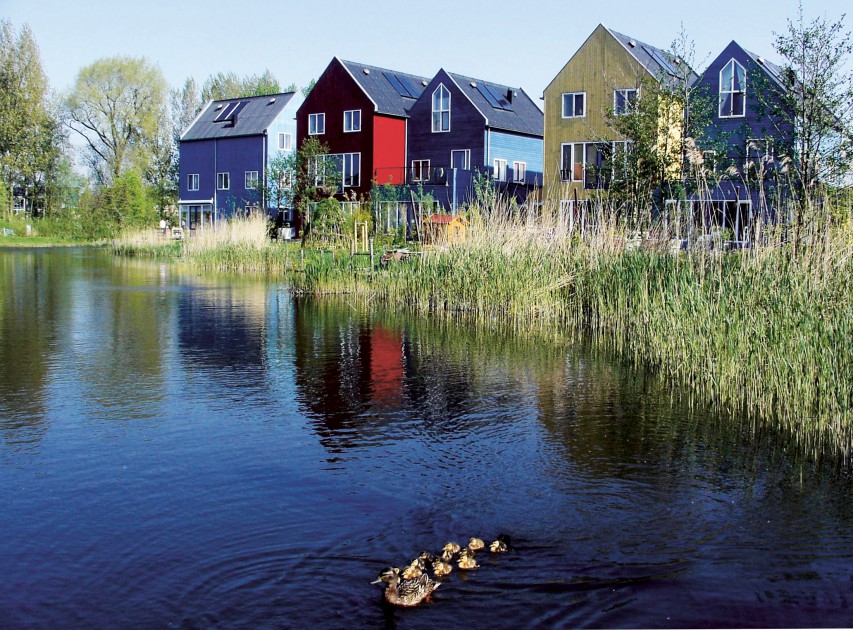 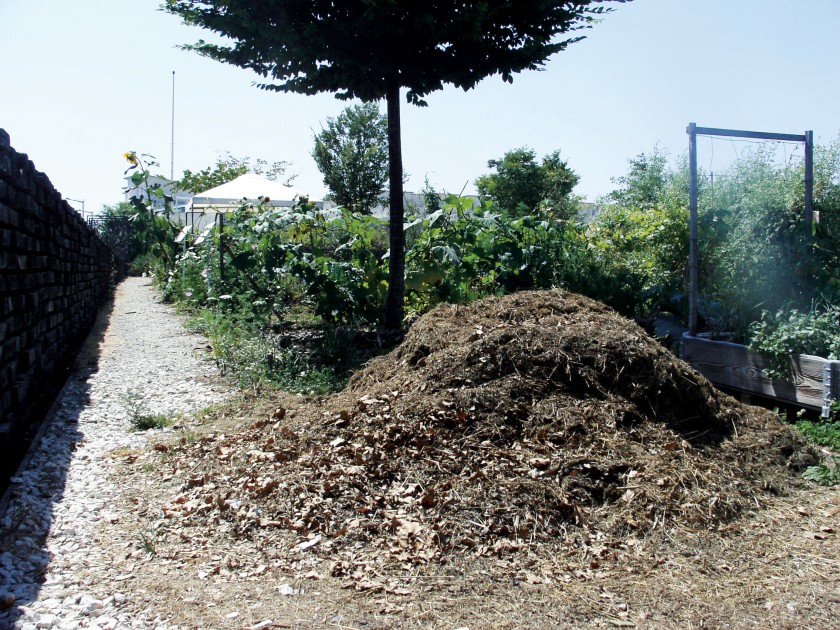