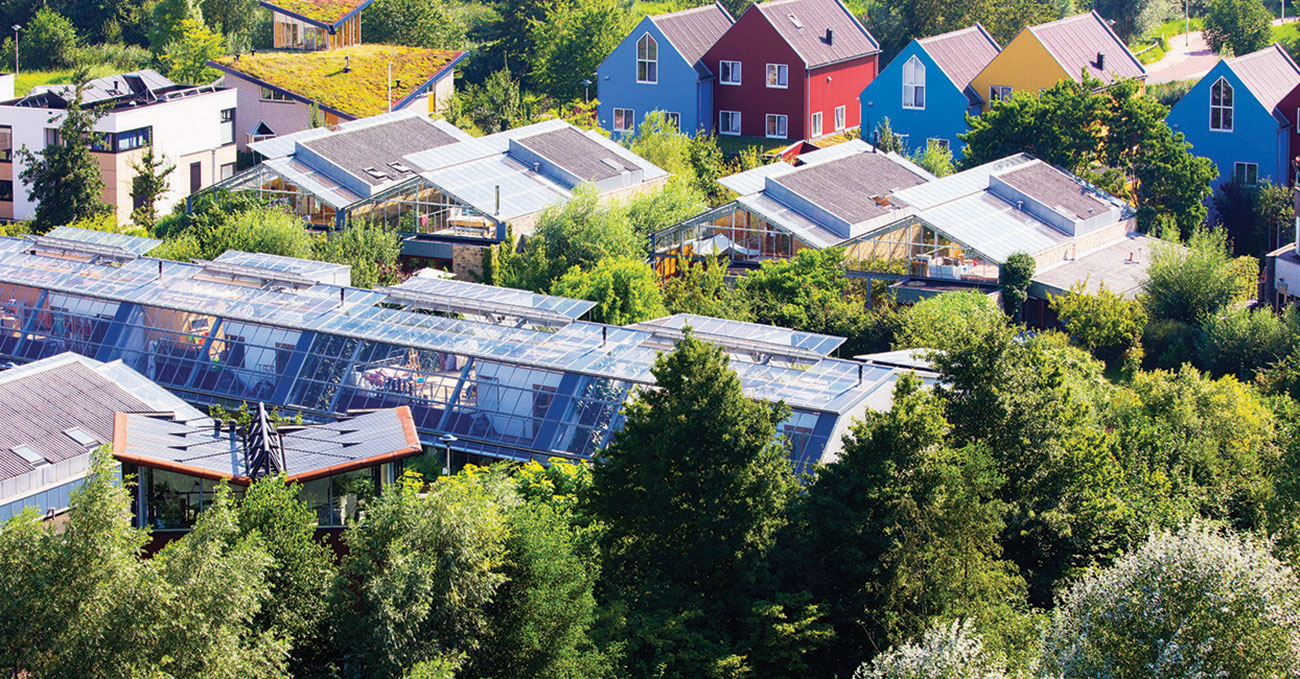 Green and blue the basis for a circular city

Towns and cities are the central locations of production, consumption, innovation and decision-making in our society. They are the brick-and-mortar manifestations of human thought and our relationship with nature during the past century, with everything that this entails. As the centre of industrialisation, towns and cities are the cause of the present environmental crisis. Yet they also hold the innovative capability to overcome that crisis. One of the main reasons for the inefficiency of our towns and cities is the excessive separation of functions and the centralisation of facilities (electricity, food, wastewater, etc.).

IS THE CITY THE PROBLEM? THE CITY IS THE SOLUTION!

More than half of the world’s population lives in cities. Cities are large-scale consumers of water, resources and food, and they produce enormous amounts of waste, air pollution and CO2 .

FROM PROBLEM TO SOLUTION

Luckily cities are also breeding grounds for new developments. There are plenty of new social initiatives in the social, economic and ecologic fields that reduce the impact on the environment and promote a healthy and attractive city. Examples include urban architecture, energy co-operatives, water boards’ energy and raw materials factories, car sharing and initiatives to make the city greener.

Cities are faced with enormous challenges in the 21st century. We will need to design them more efficiently with regard to the use of natural resources and energy. We need to find ways to adapt them to climate change and we must find a way – in spite of the effects of climate change – to keep them attractive and healthy. This transformation is not purely technical. It will need the commitment and creativity of people who work and live in the city and of urban development professionals. New cooperation is also necessary between diverse parties such as water boards, municipalities, businesses, co-ops and citizens. Only together will we be able to make the transformation successful. This requires new forms of organizing and managing.

Solutions are being sought in urban areas to absorb the consequences of climate change and to realise more efficient use of energy and resources. Water boards, for example, are working on producing energy and extracting raw materials from wastewater, thereby transforming wastewater treatment plants into factories for energy and raw materials.

Within the circular city green-blue grids are considered one of the structuring elements in the city and as one of the natural bearers for closing urban cycles.

Green-blue grids can easily be combined with elements such as recreation, biodiversity, cyclists and pedestrians, energy and heat generation and the production of raw materials.

THE IMPORTANCE OF GREEN-BLUE GRIDS IN TOWNS AND CITIES

Many cities around the world (such as Singapore, London, Berlin, Amsterdam, Nijmegen and Rotterdam) are actively working to increase the presence of nature and water within their borders and to protect existing vegetation and water. The importance of the natural elements of the various themes described in this book is becoming more and more widely recognised. An example of this new approach can be seen in London, with the ‘London Green Grids’ project and an international urban agriculture movement born among townspeople. [Greater London Authority, 2006] 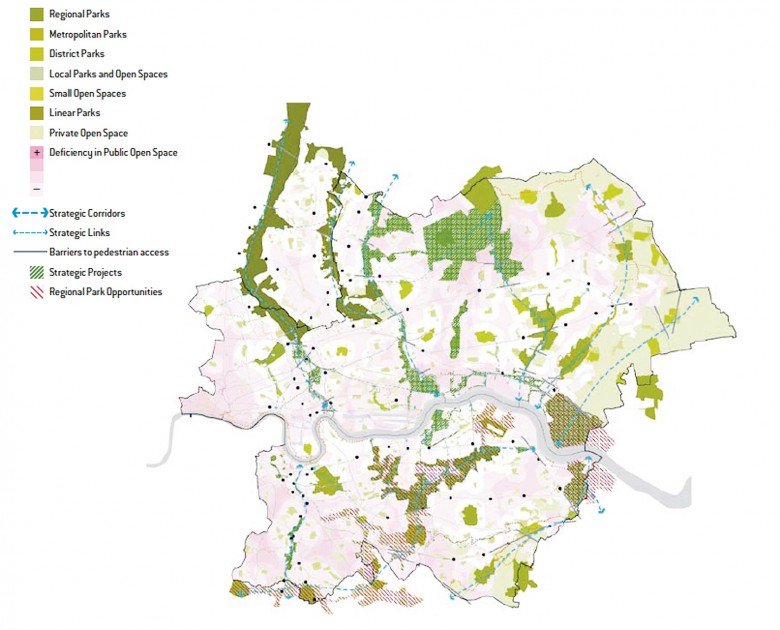 Green-blue grids can facilitate a variety of functions: water storage and treatment, urban lungs, district cooling, biomass production, nature development, food production, recreation and an attractive and safe route for cyclists and pedestrians. The urban wastewater chain – as part of the grey structure – can also produce energy, heat and resources.

There are many advantages to having more green and blue areas in towns and cities: 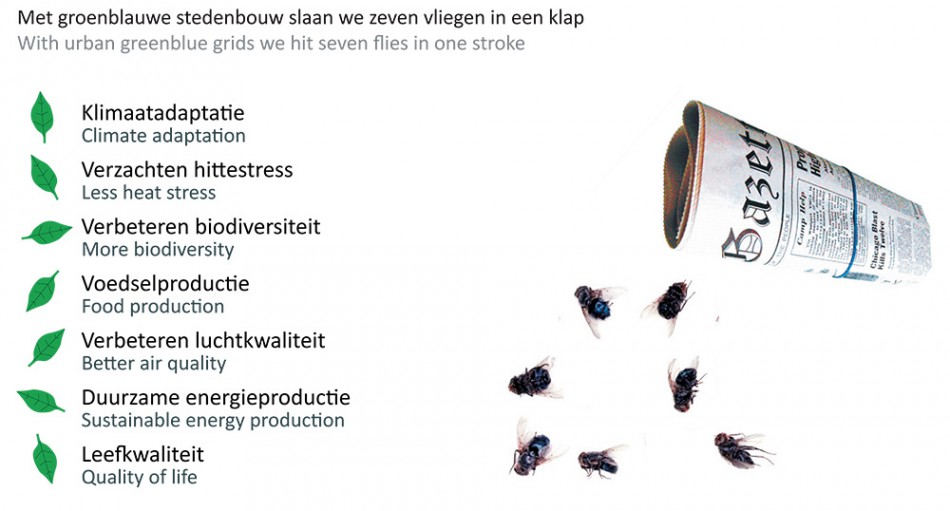 Depending on how the vegetation is structured, green surfaces can have a significant sponge effect on precipitation, which then no longer needs to be drained off. The same is true of water surfaces that are designed in such a way that they can buffer water by allowing the water level to fluctuate.

On hot days, districts with large amounts of vegetation or surface water can be up to 10 degrees cooler than heavily bricked or concrete urban areas. Trees have a favourable effect in the microclimate due to their shade and by the fact that the ground below them is heated less. All types of green and water surfaces have the capacity to cool through evaporation.

Contrary to popular belief, towns and cities offer habitat to many types of flora and fauna. Their viability can be further improved by extending green-blue grids and optimising the use of the town or city’s many surfaces, such as roofs and facades, as foundations for vegetation.

In many of the world’s metropolises, urban food production is still a reality. However, in Western towns and cities it is becoming a new trend once more, as evidenced by the emergence of urban agriculture, city gardening, guerrilla gardening and farmers’ markets.

Green areas cannot compensate for all the pollution caused by human activity and will never be able to replace active measures to deal with sources of pollution. Nevertheless, vegetation and urban trees can absorb CO2 and sulphur dioxide and bind particulate matter and as such can help bring about at least a degree of improvement.

ENERGY PRODUCTION FROM BIOMASS AND WATER

Waste and wastewater will increasingly be considered sources of raw materials.

For example, phosphate and nitrogen, but also heat and energy, can be reclaimed from wastewater.

Since the first public parks were created, urban planners have been aware that vegetation helps to improve quality of life for townspeople. Green areas are places where people can go for recreation and for physical exercise. This benefits health and reduces stress levels. Creative play areas in natural surroundings are important for children, as they enhance their social skills and concentration.

More nature in towns and cities, in the form of vegetation and water, reduces health care costs and with extensive upkeep and by involving residents a municipality’s management costs can be reduced: More nature adds to a town or city’s appeal as a place for businesses to set up office and for skilled workers to live. The values of homes situated near water or green areas are higher than those of comparable homes not located near green areas or water, a fact reflected in their property values.

Green-blue grids provide excellent opportunities for recreational facilities and an attractive infrastructure for cyclists and pedestrians and can therefore encourage the use of bicycles, which saves energy and reduces CO2 emissions.

Providing city residents with opportunities to participate in the design, construction and maintenance of green spaces creates more engagement and it may be possible to save on costs of installation and management.

City residents can actively contribute to making the city more climate-resilient by making their gardens and roofs more green.

The district is the perfect scale at which urban cycles can be closed. In the district consumers and producers are close together. The waste heat from a business can be used to warm buildings. Rainwater can be buffered in the district, thereby increasing its attractiveness. 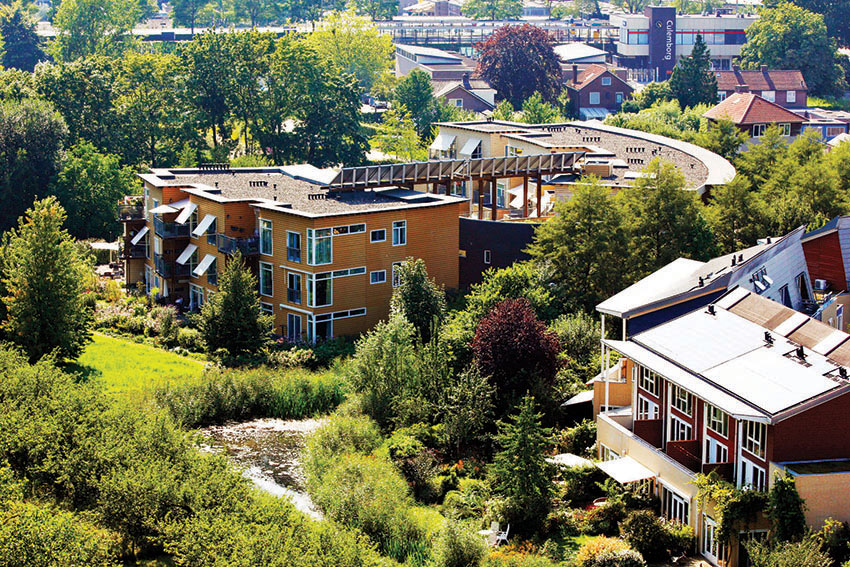 An example is the ecologic district EVA-Lanxmeer in Culemborg (eva-lanxmeer.nl), where all the rainwater is buffered. Greywater is treated locally and added to the district water. The Waterschoon project in Sneek (waterschoon.nl) takes it one step further. In the new district Noorderhoek energy and raw materials are produced from wastewater.

Although vegetable gardens and urban agricultural businesses in the district provide but a small portion of the food for a district, they do bring us back in touch with food production, thereby increasing awareness. An extra advantage is short transport routes. Urban agricultural businesses and vegetable gardens also provide social meeting points.

There are many opportunities for a climate-resilient approach at the district and street level. The starting point here is retaining rainwater locally. This can be done with less paved surfaces, installing green roofs, infiltration of water and the realisation of water storage in the district. Rainwater can also be buffered and used for toilet flushing.

Wastewater is usually treated in a central wastewater treatment plant. In a more decentralised approach, local energy and resources can be reclaimed. In the Waterschoon project in Sneek and the Jenfelder Au project in Hamburg (see example projects), the water system is a large energy provider for the district. Heat can also be recovered from surface water, from the air and from the ground with a water pump. Heat can also be recovered from wastewater and treated wastewater for use in buildings.

In many cities local food production is being developed in many forms: from private vegetable gardens, roof gardening and community gardens to professional urban farms. The advantage of these initiatives is that they bring the urban resident back into contact with food production. A decentralised energy and raw materials factory (such as in Jenfelder Au) in combination with an urban agriculture business is ideal for the circular city; the treated wastewater and the raw materials released (such as phosphate) can be used for local fruit and vegetable cultivation.

Green-blue grids can benefit residents particularly at the district level. Green roofs, bioswales, parks, community gardens and natural playgrounds are all part of the circular city. They make the district healthier, more attractive and climate-resilient. People who live in a green environment are in general less stressed. Children can play outside, which can reduce the number of overweight children. 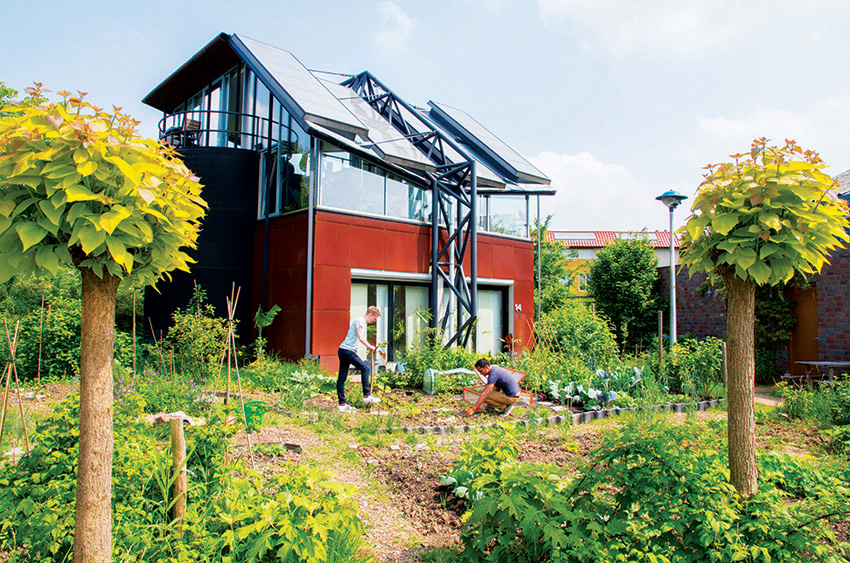 A house with solar collectors and vegetable garden in EVA-Lanxmeer, Culemborg © George Blakenburg

Not only at a city and district level can we work on the circular city, but also at the building level.

At the moment households use drinking water for showering, washing, cleaning, watering the garden and preparing food. Ideally the greywater from the shower and washing machine and blackwater from the toilet can be treated in a helophyte filter and be made suitable for reuse. Clean rainwater from roofs often ends up in the sewer system. In general rainwater can be used again without being treated for the washing machine, the garden or for toilet flushing.

This is already quite common in Belgium and Germany.

Because gardens continue to become more compact and paved, more and more rainwater from gardens must be discharged through the sewer system. Paving surfaces is bad for soil life and for the water table; it speeds up the water discharge, intensifies the strain on the sewer system and increases heat stress. By not paving gardens the rainwater can drain into the ground. In addition to retaining rainwater, unpaved gardens also keep the surroundings cooler through evaporation. Other options for retaining rainwater include installing a green roof, a ditch or a rainwater retention pond.

It is important to insulate a house well in order to reduce the demand for heat. Applying sustainable energy sources, such as solar collectors and PV cells, heat recovery from shower water and the use of ambient heat is an important second step.

Part of our own fruit and vegetable needs can be met by planting a vegetable garden with a fruit tree, berry bushes, nut trees and a small greenhouse. For complete self-sufficiency, including potatoes and grains, around 170 m2 per person is needed. Organic waste can be composted in the garden and used again as fertilizer.

Fifteen percent of the weight of household waste can be saved by composting organic waste. Separating waste to make reuse possible and limiting residual waste is of course important.

More vegetation on and around the home is roof buffer rainwater, thereby helping prevent flooding during heavy rainfall. Vegetation evaporates water and keeps the immediate living environment cooler. A green garden offers a habitat for all sorts of small animals and insects: bees, butterflies, beetles, birds, etc. A combination with water, such as a retention pond, attracts even more plants and animals. 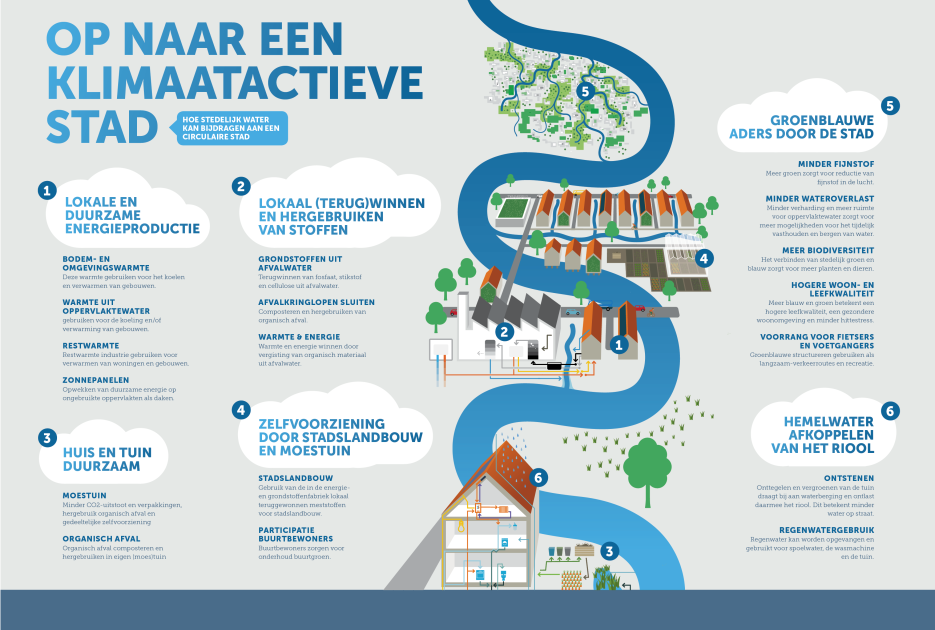